Is there anything more beautiful in the world than a walled garden? The answer we all know to be no. There is something so contained, so benign, about a walled garden; in which patterns of brick walls and grass paths, glasshouses and vegetables take on a glorious life of their own, enveloped in a gentle micro-climate that disparages the worst the weather can throw at it and nutures and brings things on in just the way they should be.

Yesterday, after a brilliant, still, baking day in the valley, and at the seaside, with friends, I called in at the beautiful walled garden not far from here where my friend Liz has created the most extraordinary paradise you can imagine.  About 20 years ago it was restored from dereliction and turned into a beautiful flower garden.  Liz took over a few years ago and has done her own, massive restoration, introducing vegetables and replanting borders. I needed to borrow flowers because we’ve spent the day today taking photos at the Old Parsonage; and after the cold wet summer everything in my own garden was washed away or has decided not to come up (or if it has, it’s been eaten by slugs).

The picture in the Walled Garden, by contrast, was one of exuberant profusion. The English summer at her most beautiful. We had a glass of wine, with Liz and friends; and picked a few bunches of placid old fashioned roses; and it was so beautiful that I took a few snaps to remember the moment.

And isn’t it a relief that summer has arrived, at last?  If you are like me, the weeks of rain are forgotten in an instant. All is forgiven on an evening and in a place like this. 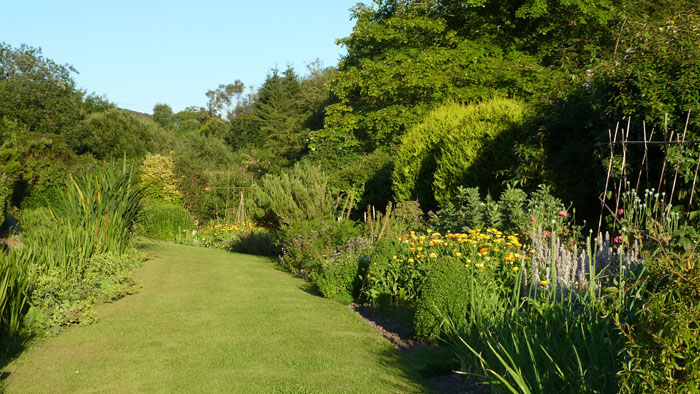 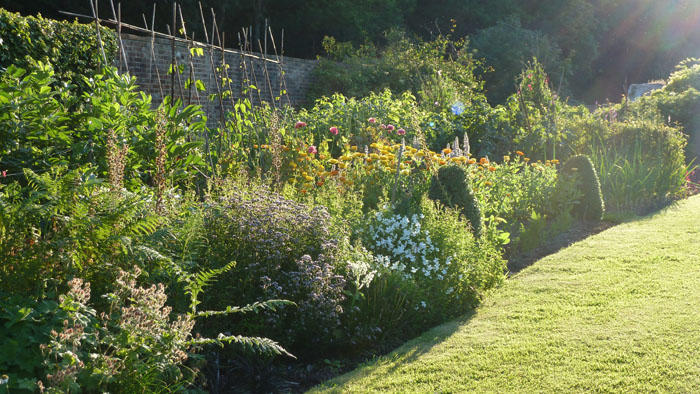 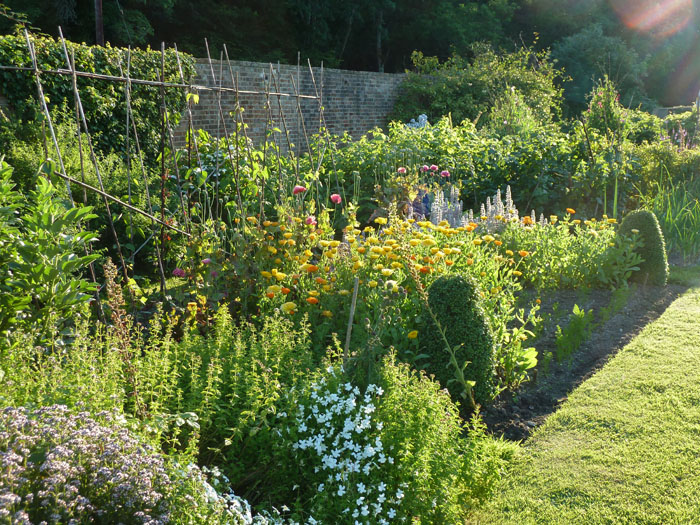 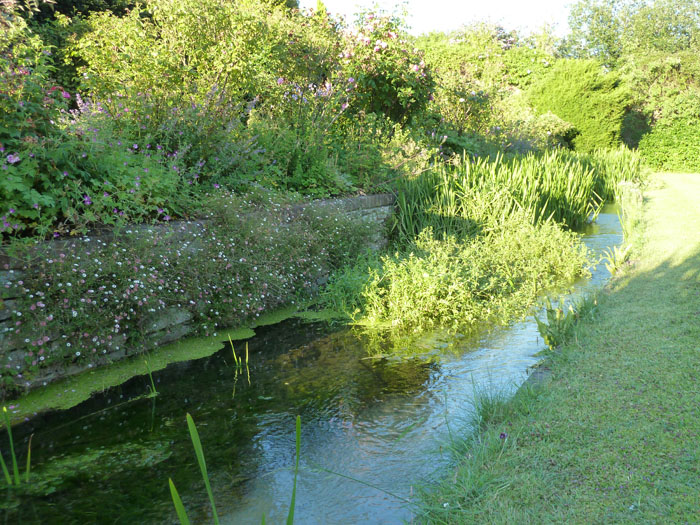 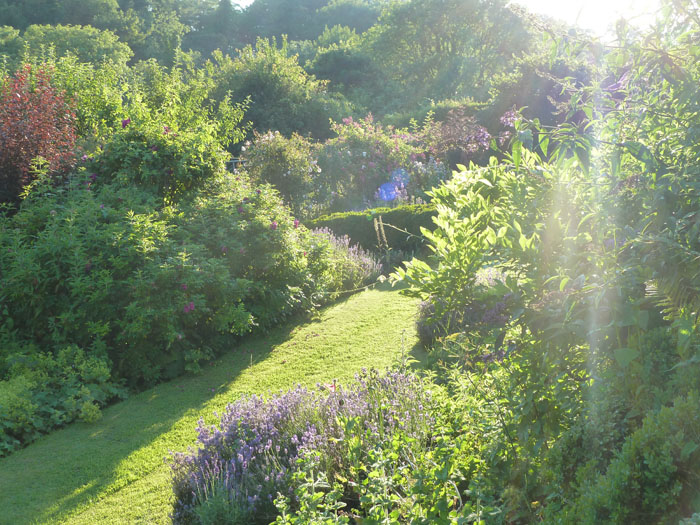 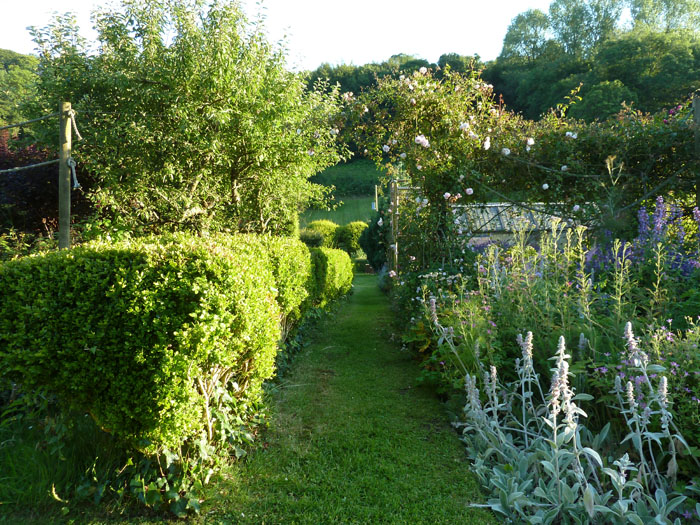 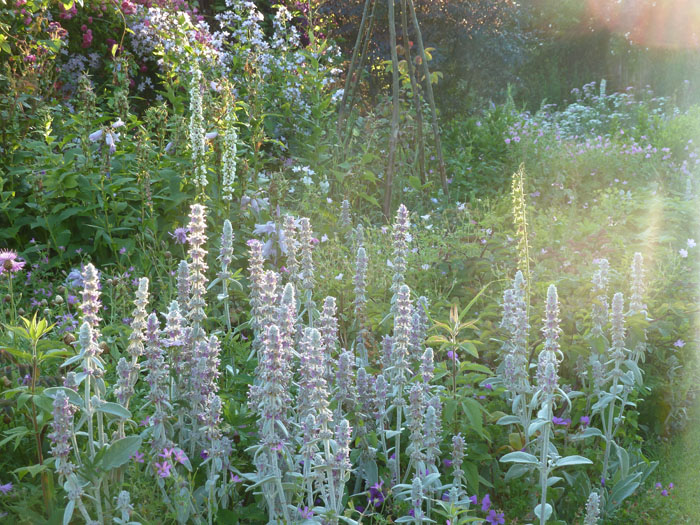 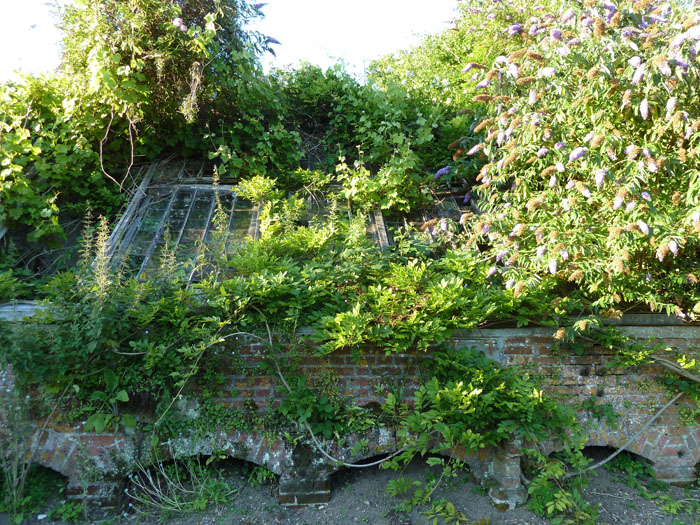 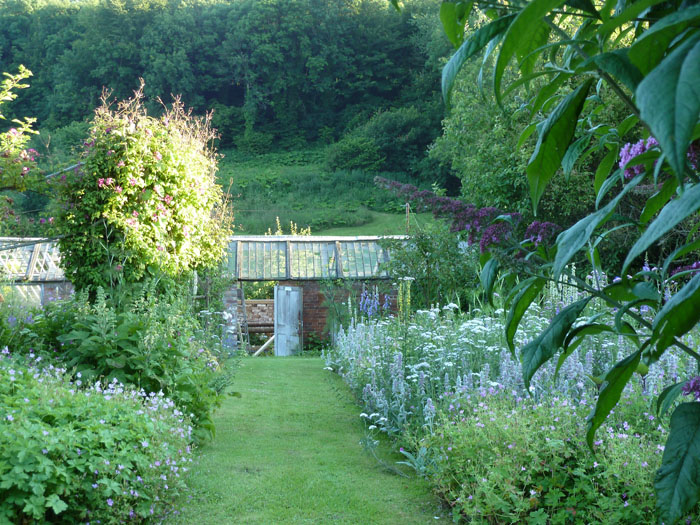 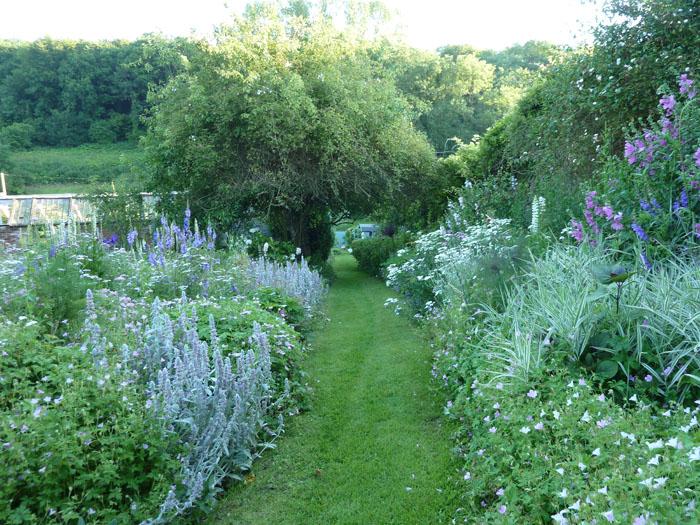 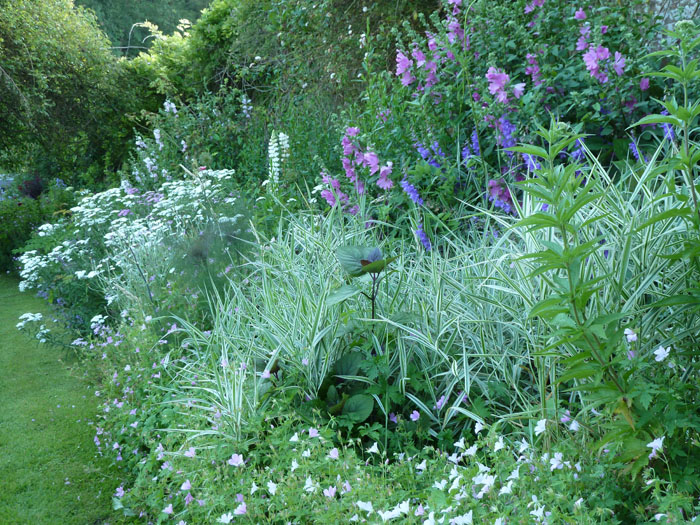 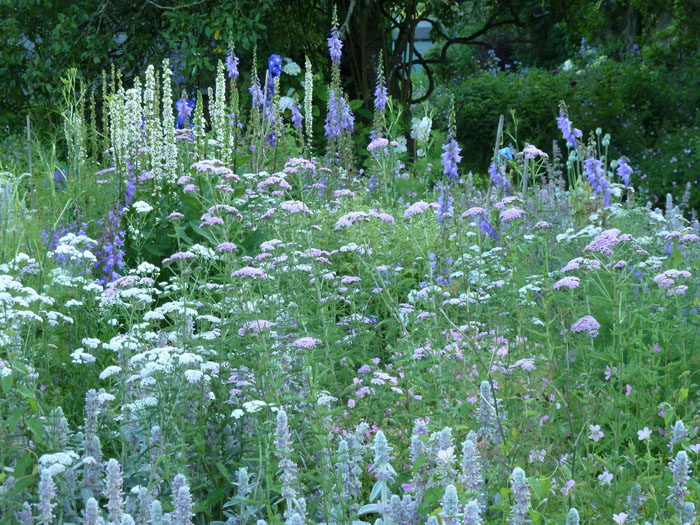 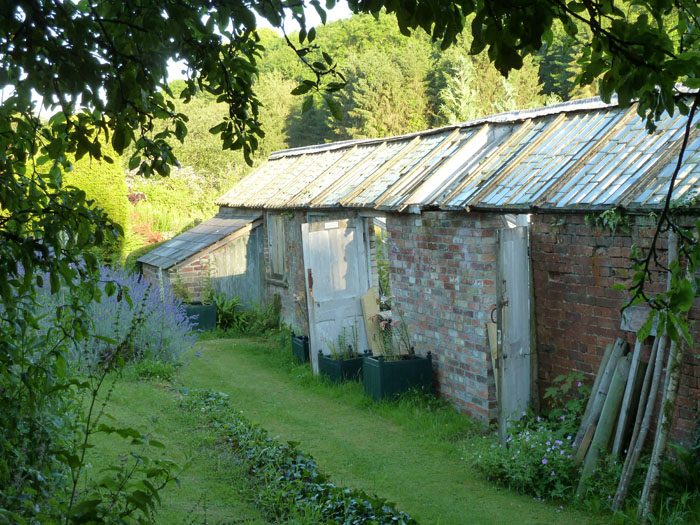 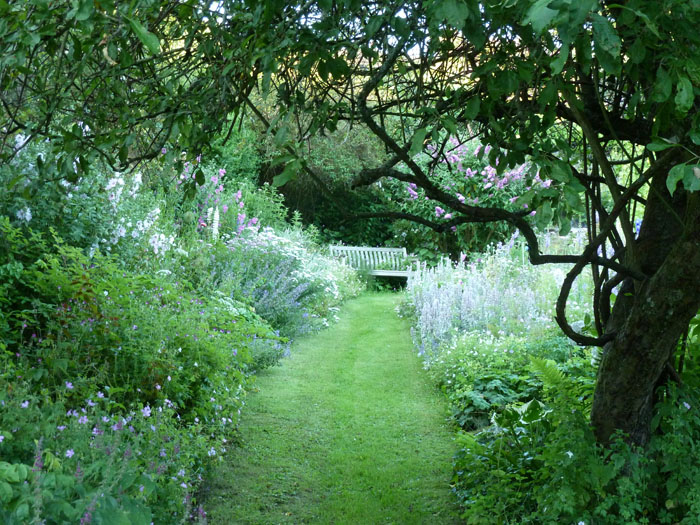 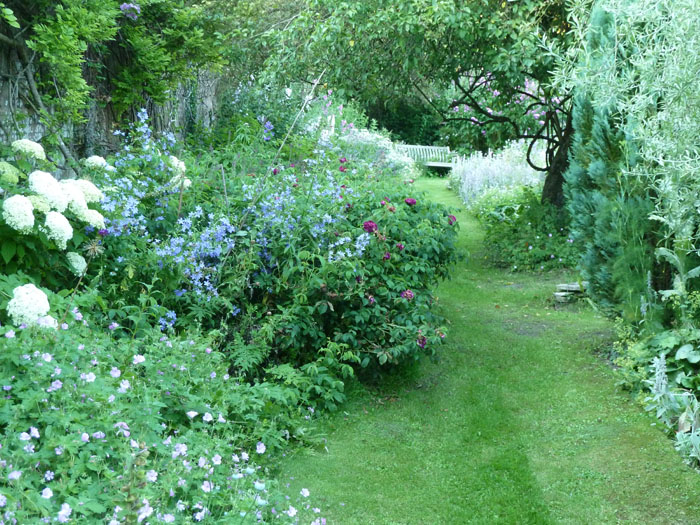 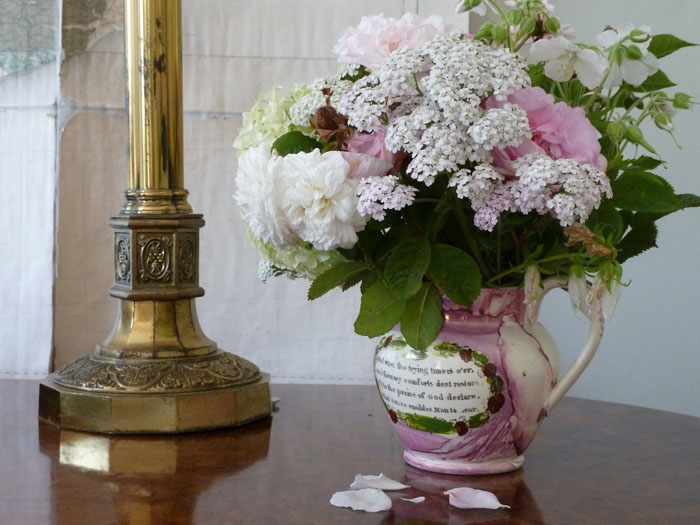 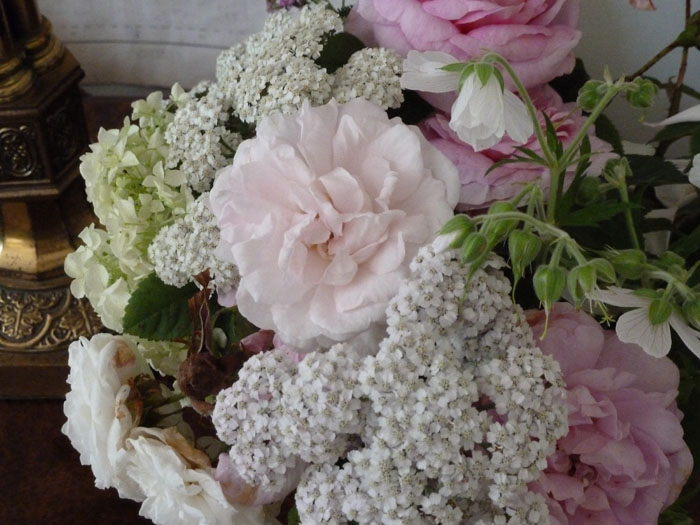 Gorgeous walled garden, but oh my, isn’t pink (and even copper for autumn flowers) lustreware just great for flowers?

If only we could have gardens like this in town.

wouls so love to have this sort of garden, it very beautiful and big to. my kids would love it.

That combination of beautiful cut flowers in wonderful mugs and wait a minute, very cute, could it be, toddler Ben Pentreath? I am sure these photos were not here yesterday!! unless I was still in shock form seeing the wall garden pictures!!!!

Excellent! Do say when you have a publication date for that…Ax

Ever since reading “The Secret Garden” as a child, I’ve been in love with the idea of walled gardens. They seem like magical places where many things are possible. How lovely for your friend to have her own secret garden like this.

Beautiful.. Inspiring, original, so english. I find your site in general and this “Inspiration” part a real delight and a magical ‘window’… I’ve been enjoying your site for more than a year now and I realize that it’s one of the most interesting and honest spaces I can find on the web. Thanks for sharing your world, Ben!

Fantastic photos! It’s amazing how England can look, when the sun finally gets its act together…!

We Antipodeans hope you tell us which Sat. so we can look online.

I often dream about the walled gardens that were in and around the ancient cathedral city where I grew up. There’s definitely something magical about them.

I often dream about the walled gardens I used to explore in and around ye ancient cathedral city were I grew up. There’s definitely something magical about them.

A great end to my day viewing these pictures, very magical, a gasp for each photo.

Gorgeous garden, hard to believe it was ever derelict!

This looks exactly the way I’ve imagined English gardens. It reflects such an artistic sensibility.The colors,texture and charming vistas are delightful.
You are fortunate to have such a talented friend who is kind enough to share this gem!

Dreamy photos Ben! I am intrigued by mention of photos of OP…