The floor polisher of the Pantheon

You won’t find me getting up early for the Sales. I slightly look down on (can I admit it?) that peculiarly British habit of getting up very very early to get in the queue for… name your event… the Last Night of the Proms, the Royal Wedding, something to do with Wimbledon.

But I will get up very early to go and look at a building.

Call me predictable (you’re welcome, I think predictability is a very under-rated attribute) but the Pantheon is probably not just my No. 1 building in Rome (it is, of course) but shall we go a bit further and put that on the world list? So without doubt I know that when I’m in Rome I’m going to make a visit at some stage.  And by and large I like to get up early to get there.

The first glimpse of the massive scale of the building through the narrow streets is always thrilling. 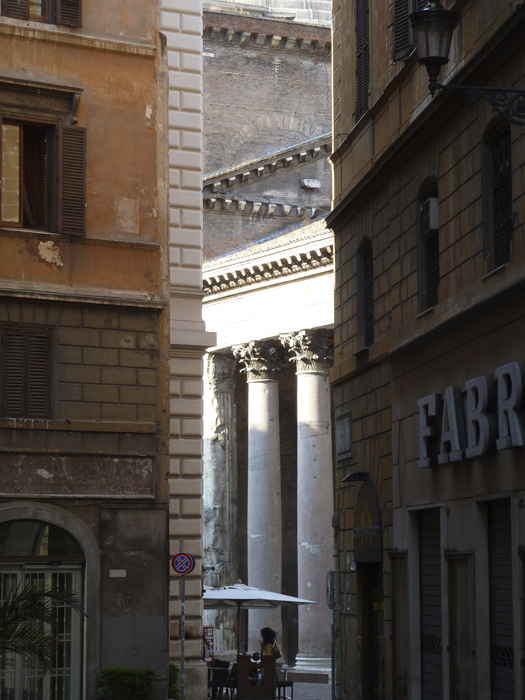 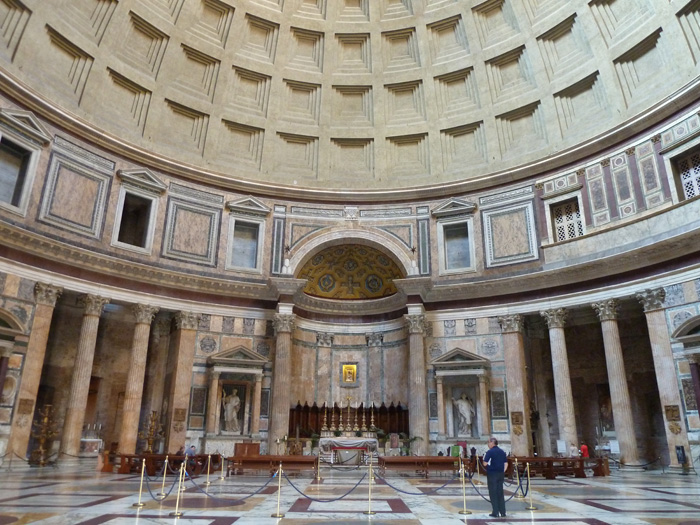 The advantage of getting up early is that you can spend time alone in this perfect space. I guess for an hour or so, there might have been about 15 or 20 people in the building.  I suspect one or two were locals.

Can you imagine having that on your walk to work every morning? 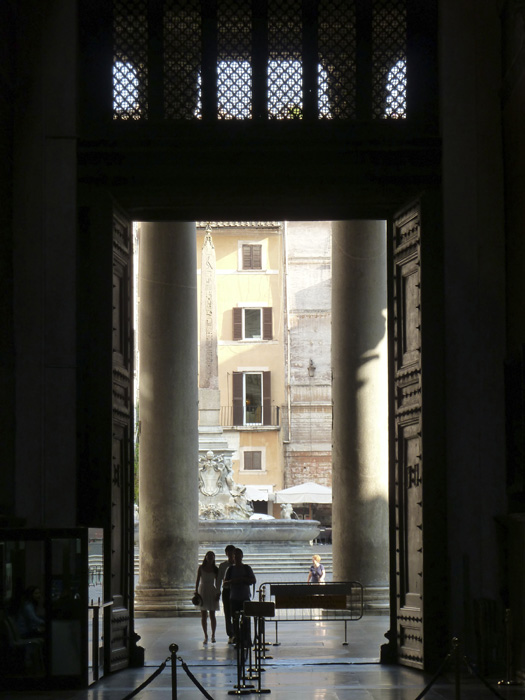 Later of course the great bronze doorway becomes a thronging mass of tour groups, making their exhausting one-day trek around the sights. I nearly started to do a photo story on the vast groups that trail between the Pantheon and Piazza Navona. I noticed they are all wearing headphones and garishly-coloured receivers hanging round their necks now. Why? Because the tour guide is speaking into a microphone transmitted into each of those little headphones. The same hot, sweaty, blank expressions on each face… except, perhaps for one or two… who I wanted to shout at, grab by the hand, say… “come this way… Let’s look at things differently”.  (Perhaps a good thing I kept my thoughts to myself).

At that time of the morning, the sun slants across the great vaulted concrete roof. 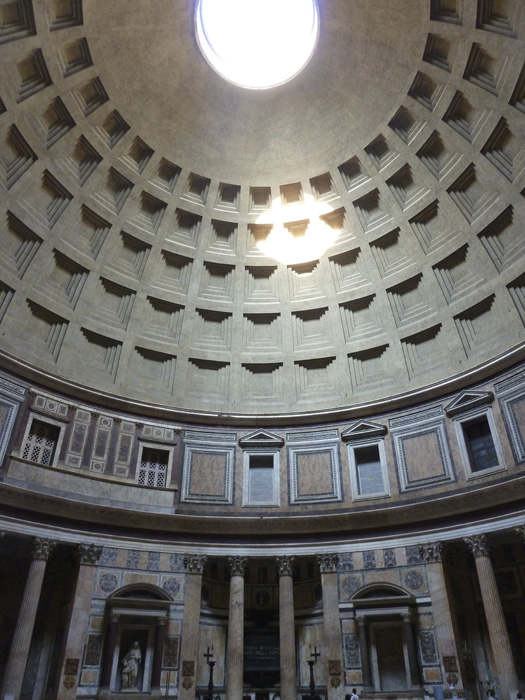 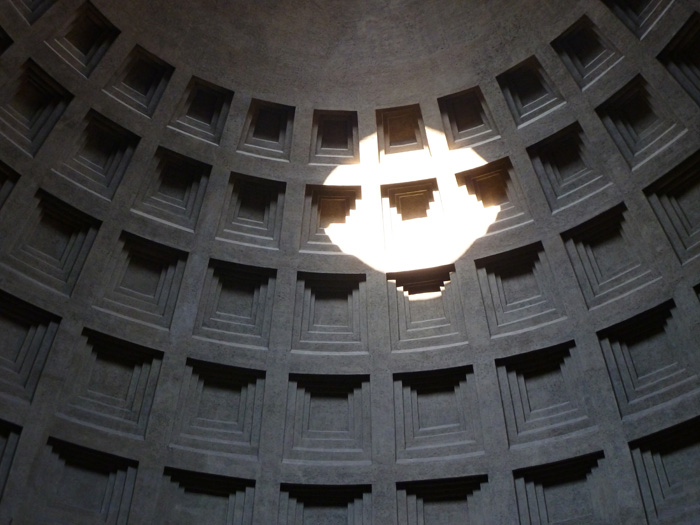 If you stay for a even a little while you can watch its gradual progress across the architecture.

Anyway, as I was hanging out, just taking it all in, I began to notice this guy. 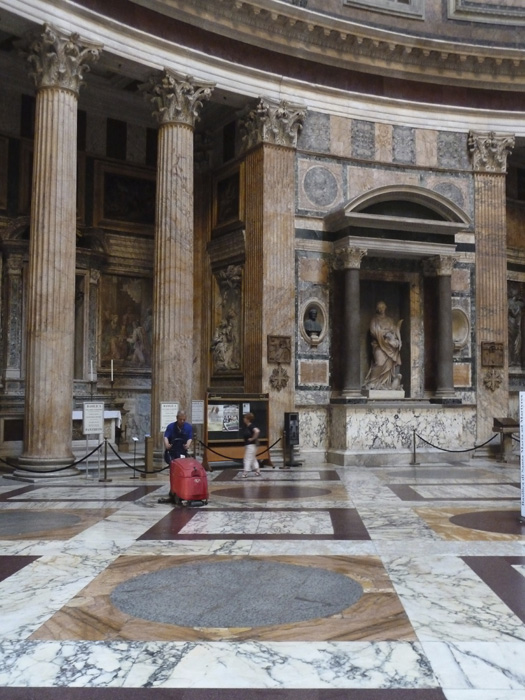 In a moment I was hooked. 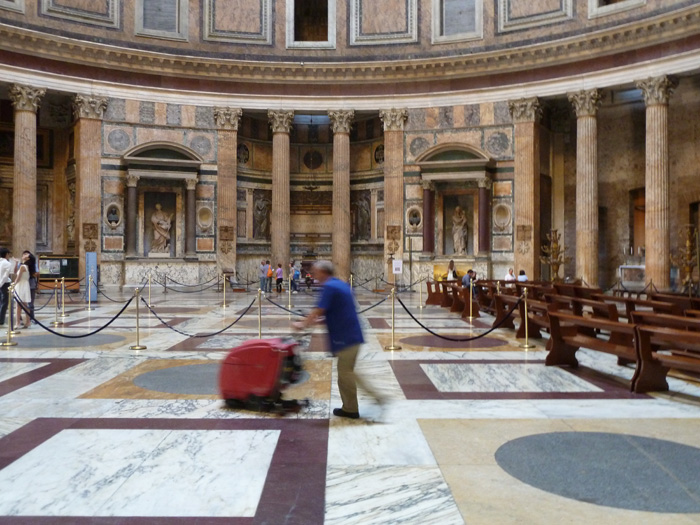 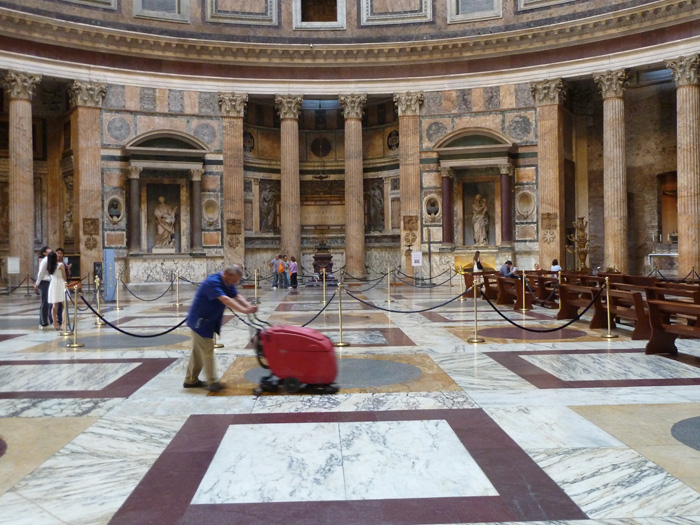 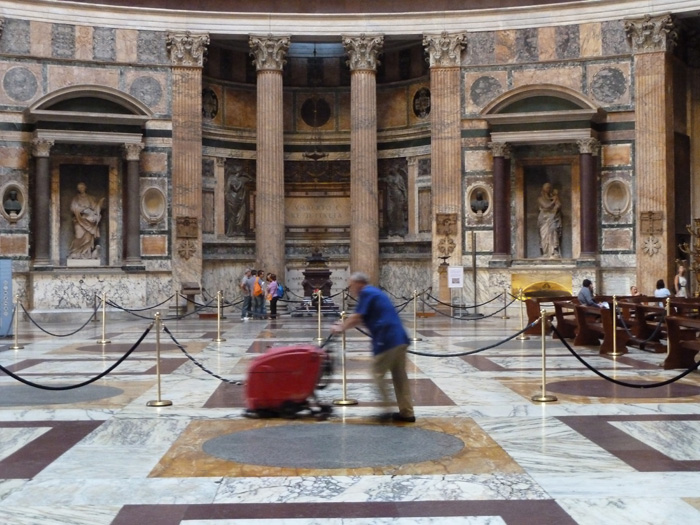 What a formidable job.

To be fair, I’d already been rather struck by this little arrangement of brooms and brushes on my way in. 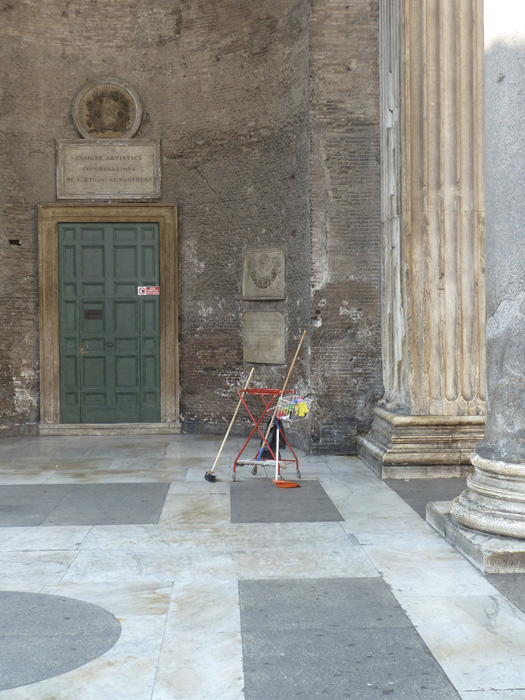 Whereever I went the floor polisher would appear. 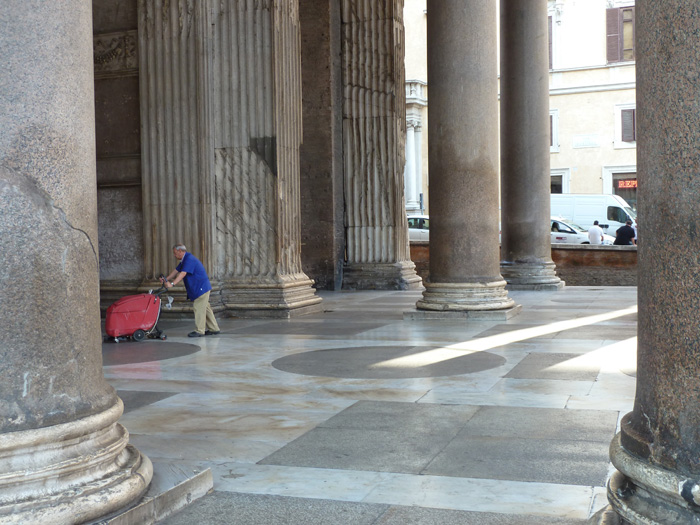 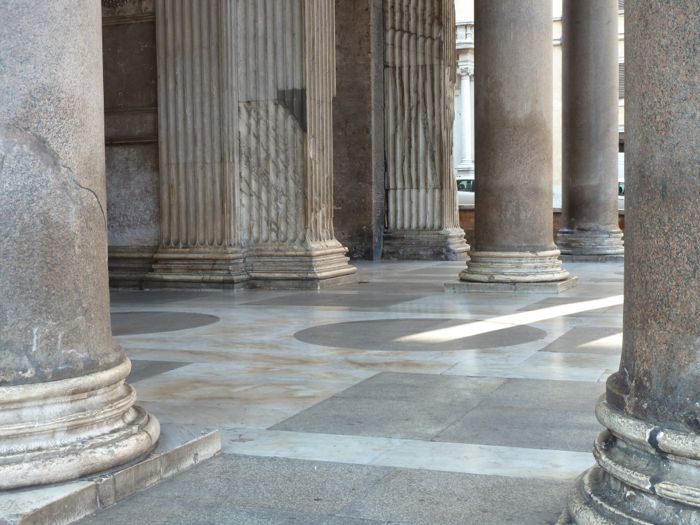 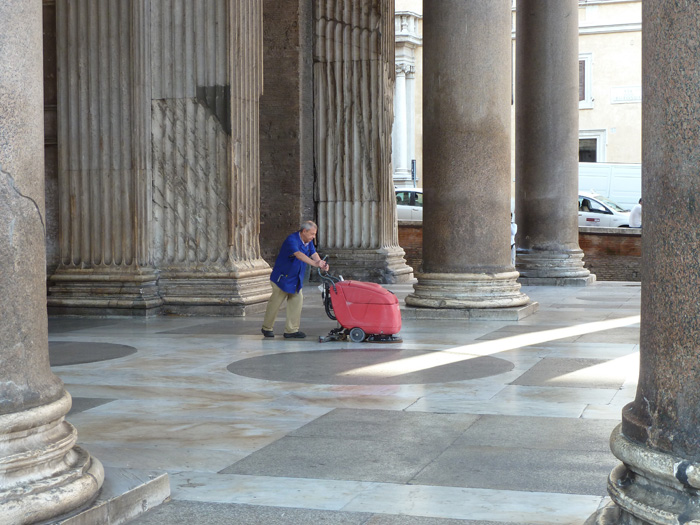 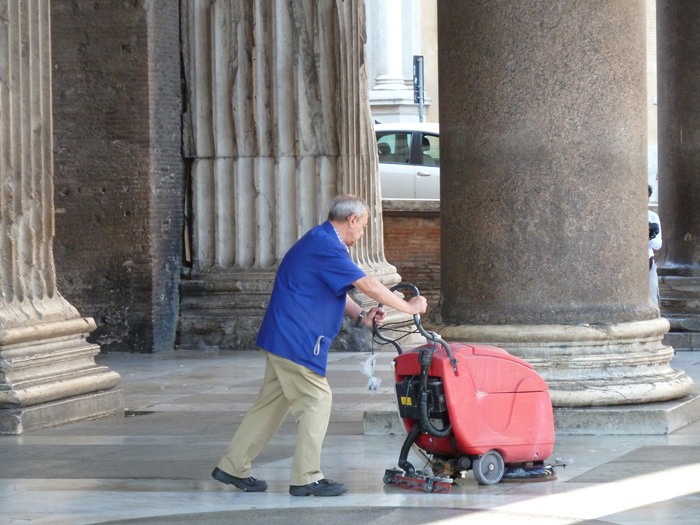 His friend the cleaning lady was to me as majestic as any Madonna by Piero della Francesca. (sorry, I know that sounds really pretentious, but do you see what I mean?). 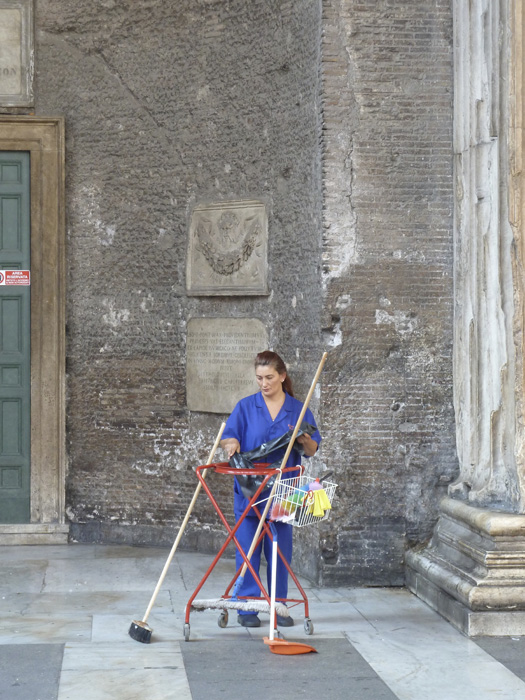 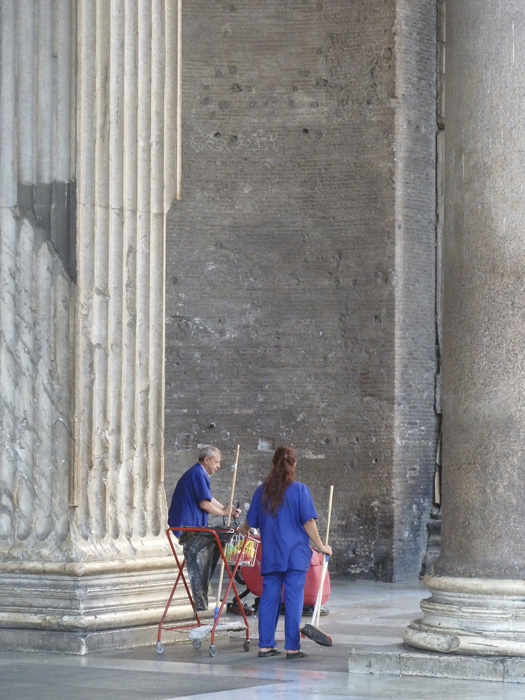 It is at moments like this that you recognise the immense scale of the building. The extraordinary thing is that the columns are single, massive pieces of stone.

I was enjoying the light falling on the vast column bases in front of the Pantheon: 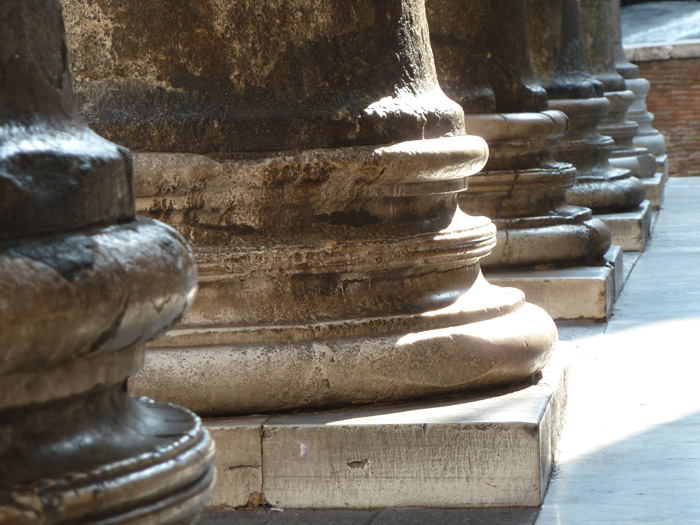 When from around the corner out popped the polisher. 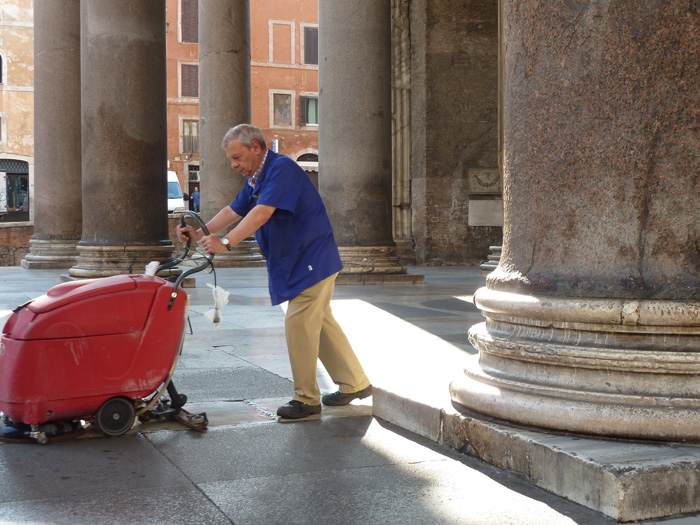 Working so slowly, thoroughly and patiently, with such care. 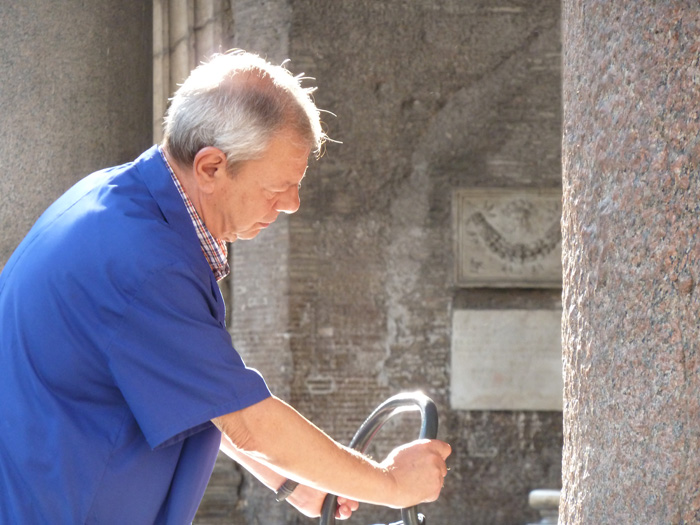 Well, all I can say is: the floor is in good hands. 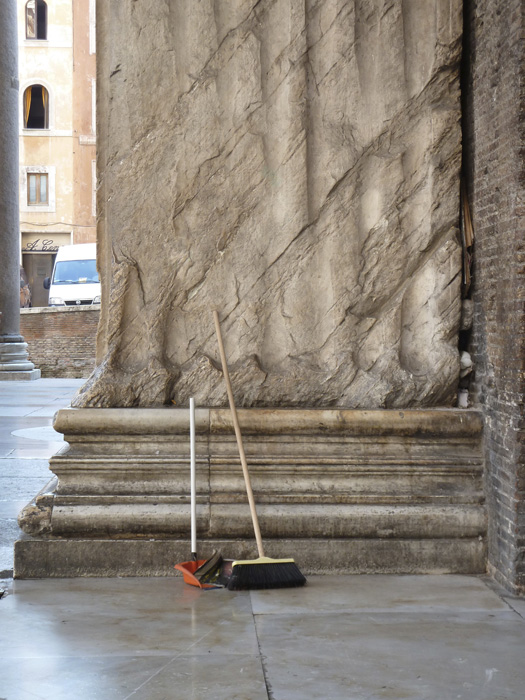 Later that afternoon, exhausted from a lot of walking, I was lying in my bedroom when an enormous thunderstorm cracked overhead, breaking the intense heat and oppression of the day. The heavens opened. I’ve got to admit I was knackered, but when it rains… like that… there’s only one place to be. I absolutely love the sight of rain pouring in through the open oculus of the Pantheon. There is something so elemental about this. So I ran through deserted streets, raging with a torrent of water from the sky, from pavements, overflowing gutters, as thunder and lightning burst around. I was at the Pantheon in 10 minutes, completely and utterly soaked to the skin. My shoes are still drying on my windowsill this morning.

Rain pours into the floor and through carefully placed drains. 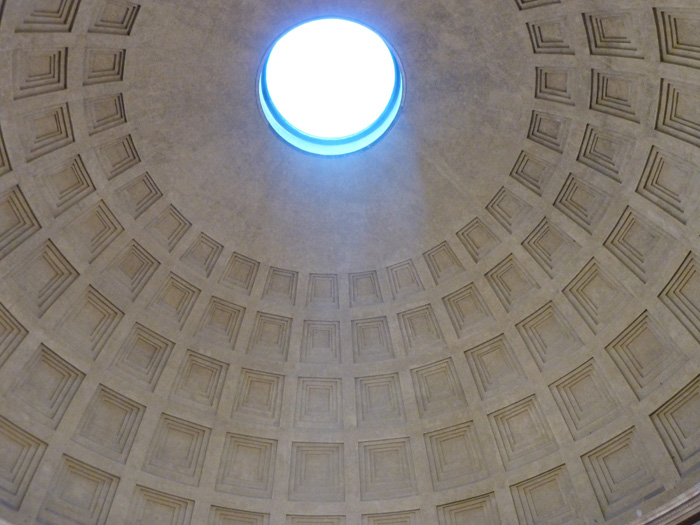 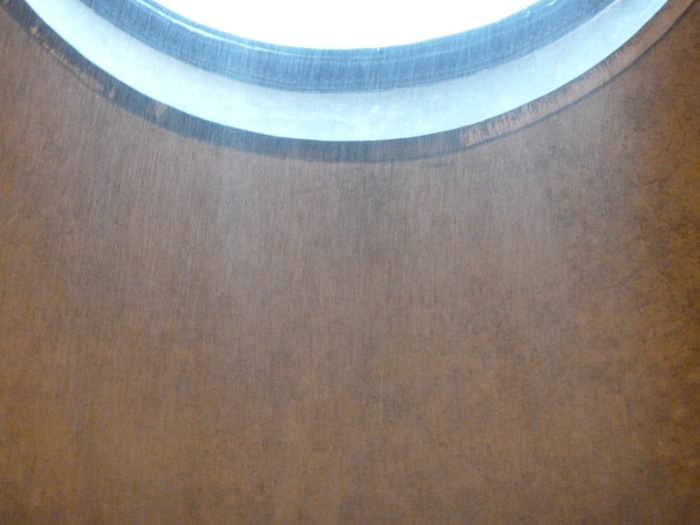 If you are ever in Rome in a downpour, I urge you to get wet and get to the Pantheon. 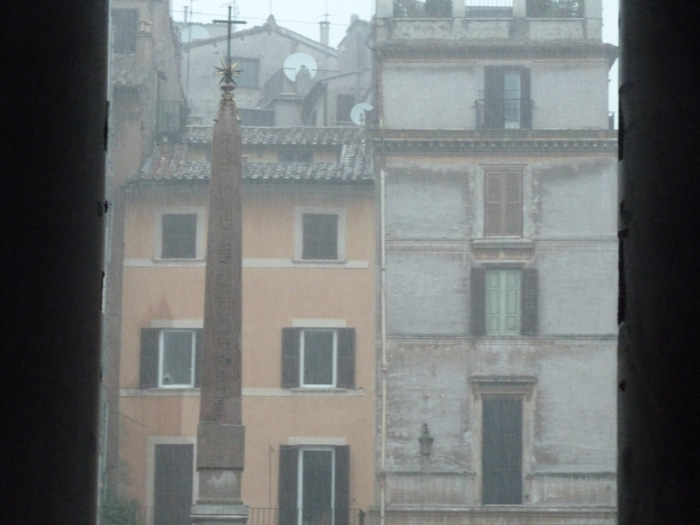 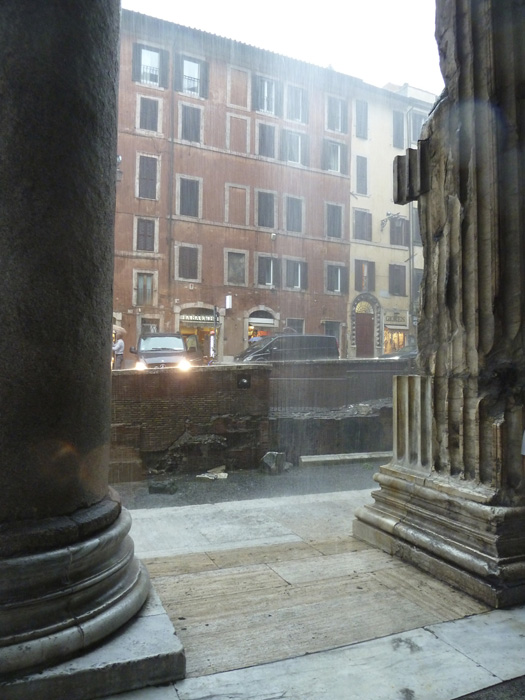 Of course, if you want to see the sunlight make its great shaft through the building you have to visit around midday. I was on my way to Palazzo Farnese yesterday and briefly endured the crush. Worth it. 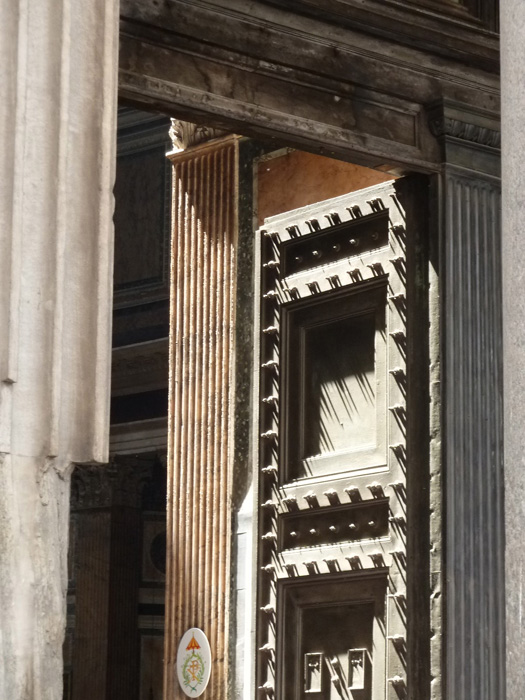 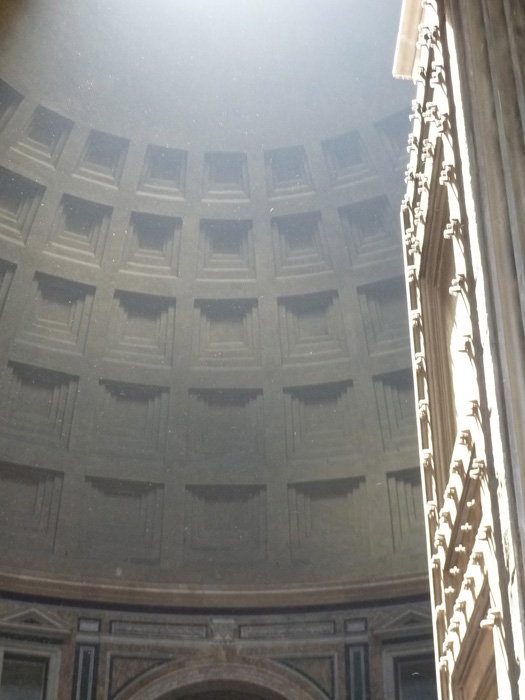 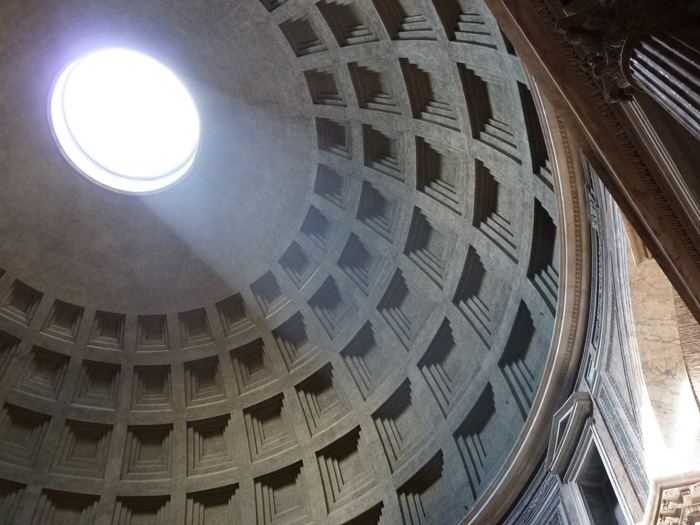 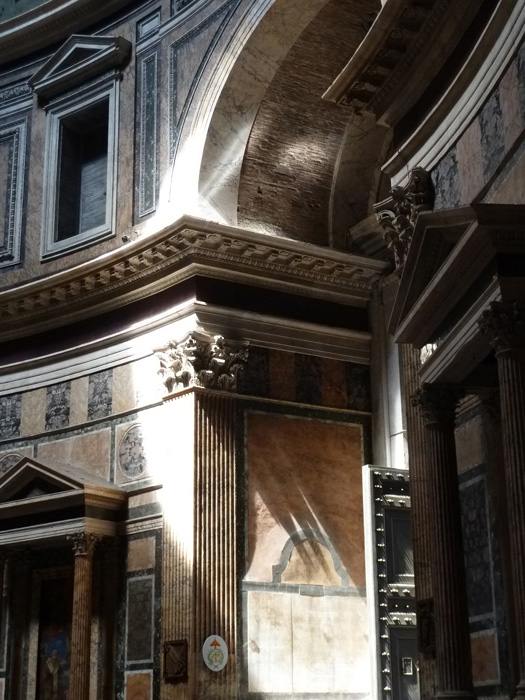 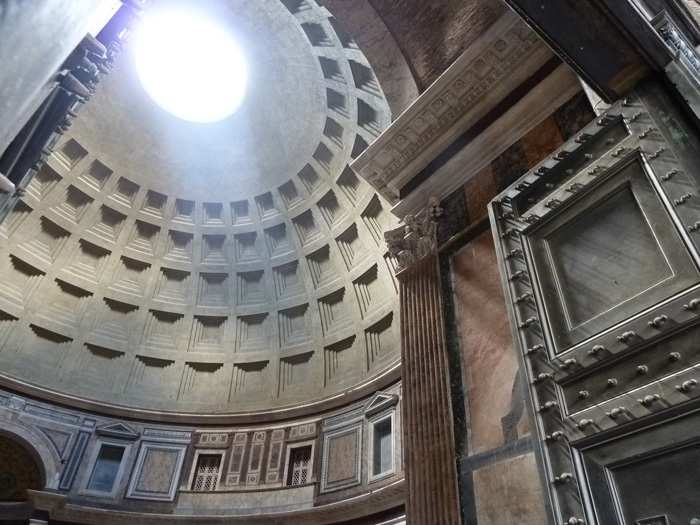 But can I confess to preferring my quieter moment the morning before? 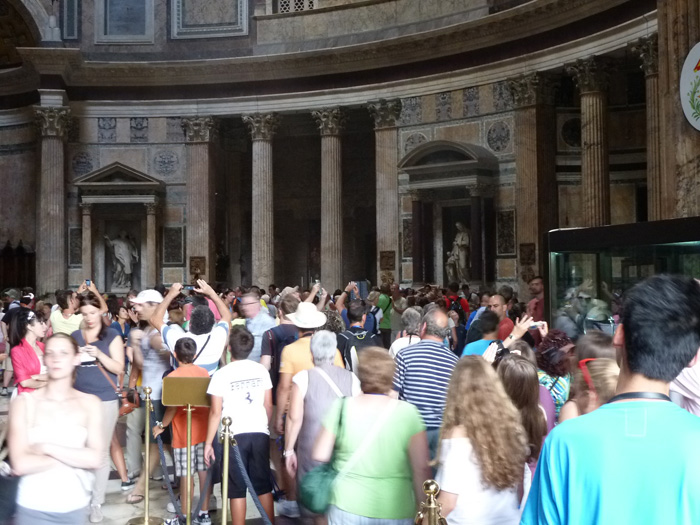 I think you’ll see what I mean.

It is clearly time for me to return to Rome–perhaps for Xmas–and your beautiful photos, clever edits and perfect captions make every installment, regardless of location, an entertaining and lovely break in the day from scrounging for auction consignments. Highly entertaining slide shows, really–almost cinematic in feel. I just wish my dahlias had prospered in the searing heat of a Chicago summer–your Dorset dahlias are clearly much happier and put mine to shame.

I was lucky enough to live in Rome for a year while in school, and would visit the Pantheon almost daily. While there I learned that those massive columns cut from a single piece were brought from Egypt, the Italian peninsula lacking granite of a fine enough quality. Imagine that, almost 1900 years ago!

Once I met a woman who was a well-connected American, who told me a story about an encounter with a Roman noble who asked the one thing in life she desired — she replied that she wished to spend one night in the Pantheon. Less than a week later she was summoned to those bronze doors just as they were closing, and locked in by a caretaker. I’m not sure what she slept on or where, but she said it was marvelous, and a highlight of her life. She talked at length about the sounds throughout the night, how different it was when closed to the street, and the breaking of dawn. I met a few Roman nobles when I was there (a little heavy on the ground, if you ask me), but none asked my greatest desire! Sadly, no night in the Pantheon.

We are headed to Rome in mid-October and staying nearby the Pantheon – and I am extra glad now as we can take your advice and see it in so many ways. Beautiful post Ben!

Ben, I’m back again (proverbial bad penny) to see if you’ve posted about V’s Birthday–not yet. But I must leave one more comment and I promise none further! If you think rising early for sales is “a peculiarly British habit” let me tell you, you folks have nothing on conspicuously-consumptive Americans. I blush to say, my fellow countrymen have been known to start lining up (queuing) at 8 in the evening, on a holiday, for sales that start at MIDNIGHT, so they can take place on Friday, the day after the national holiday! This pertains to the biggest shopping day of the year, Black Friday–the day after Thanksgiving, which always falls on a Thursday. How’s that for irony? “Thank you Lord for all I have, but sorry, it’s not enough, I’m outta here to the Black Friday Sales!” Well…I agree with your assessment of those lost souls who think salvation lies in yet one more purchase (unless it is a book, of course.) But no, it is not limited to the British. Looking forward to details of the birthday!

Okay, when you quit your day job (because it’s not at all satisfying is it?!) and become a tour guide for all the world’s best architecture…please, please, please let me sign up! Your enthusiasm and sensitivity towards our human-made environment is so wonderful. Thanks for sharing via blog posts until aforementioned career change!

Lovely post, thank you so much. I have no evidence of this, but taking in your photos of the Pantheon’s oculus I am moved to imagine that this architectural element was intended for more than light and temperature control. The Roman pantheon of Goddesses and Gods to whom this beautiful sanctuary is consecrated, were born of a Divine lineage that emerged from the Great Mother Goddess of Old Europe, Neolithic Europe. Profoundly embedded in this lineage, syncretizing throughout Sumer, Canaan/Phoenecia, Egypt, Greece, etc, was Nature. I love to imagine that the oculus was placed there to facilitate a connection to Earth energies of rain and wind and light as well as to Cosmological energies of the Moon, Sun and Stars, as was done in other human-built sanctuaries. I love to imagine the ceremonies and rituals that were enacted there in such a liminal space.

P.S. Finally got your excellent book. Reading it now, slowly and luxuriously.

I have such fond memories of the Pantheon… thank you for reminding me.
And cheers to you for finding such humanity in this sublime building…

A wonderful day; my first visit to your very lovely shop and this, one of my favourite posts. Thank you.

What a fabulous building! I love that it is open to the elements, allowing nature to enter that highly artificial space. And wonderful photos, Ben. My favorites are of the sun pouring through the oculus. Here is crazy artist’s eye at play: have the third photo in the sun series, which shows the beam crossing the dome ceiling, in your browser window, then use the mouse to grab the little slidy thing on the side of the browser window, and slowly move the photo up and down a little. As you do so, the curve of the ceiling coffers creates an illusion of motion within the picture! …OK, I did say CRAZY, didn’t I? Works on the photo above too, makes it look like you are moving into then away from the ceiling. (Sorry for the silliness, must be the effect of your beautiful photos on my day-job-sodden mind.)

I agree about the cleaning lady, truly a serene, classic face.

As for the floor polisher, perhaps he helps pass the tedium of his task by discreetly stalking handsome young tourists? I’ll bet you are not the only one on the lookout for eye candy, Ben!

Thanks for another terrific post! Do you think Hadrian knew that his building would still be so inspiring 2,000 years later? I am loving your Italian excursion from afar. Any photos of the Piazza Navona you might want to share? Great work and again thanks.

Some of your posts make me cry, they are just so beautiful and imbued with meaning. This was one of them. Thank you.

I ache to see such things in person. One day I’ll get there! I imagine I’ll use your blog to plot my itinerary! Thank you for such lovely photos.

This was so wonderful on a foggy and humid day here near the sea in Boston, MA! Spectacular, jealousy-inducing pictures. Thank you.

Visited the Pantheon two years ago. Even in the throng of people, it was a majestic, magical place. We, too, took loads of pictures of the sun moving through the room. Changing in intensity with the passing clouds. Beautiful! Wonderful memories.

Enough of stone, sweat and sunshine…..missing the O.P. garden, the misty valley, flowers in mugs on the kitchen table…hurry home.

I enjoy your posts so much. Thank you