For those that like to read the blog early on a Monday with their morning tea, in bed, please blame my friends David and Chris for throwing their annual Christmas Party last night.  Which meant I was in no state to write a thing when I got home.  More depressingly, it meant that I also had to get up very early indeed to, um, retrieve my car (why had I driven to their party when they live just around the corner, you’re asking? Because I was calling in on my way back from Dorset, and I positively knew that if I went home to Queen Square first I would never actually leave again).

Sunday nights is my usual moment of quietly writing a blog and I guess it’s become almost as much of a habit for me in the writing as it so clearly and kindly has for some people in the reading, the following day.

I’ve got to confess most Sunday mornings I wake up without a clue what I’m going to write about. But usually by the end of the day I’ve worked out the vibe. Of course there’s always a useful “restore to factory settings” button, of a tour around the veg garden in Dorset (which is in fact currently un-tourable and closed to coach parties until Spring 2014) or a breeze around a new London neighbourhood.  Sometimes, of course, it’s something a bit more interesting than that. Contenders in the last month could have included: ‘Why I was strangely unmoved by the death of Nelson Mandela’  or ‘Why I like immigration’ or, a blog that I am surely going to write about one of these days,  ‘Why is every soldier called a “Hero” – overuse of the word hero in the media’.

But luckily for now I avoided all those topics. Perhaps I’ll save them up for a rainy day.  Hang on – it is a rainy day.

And that’s what my thoughts are focussed on this morning. 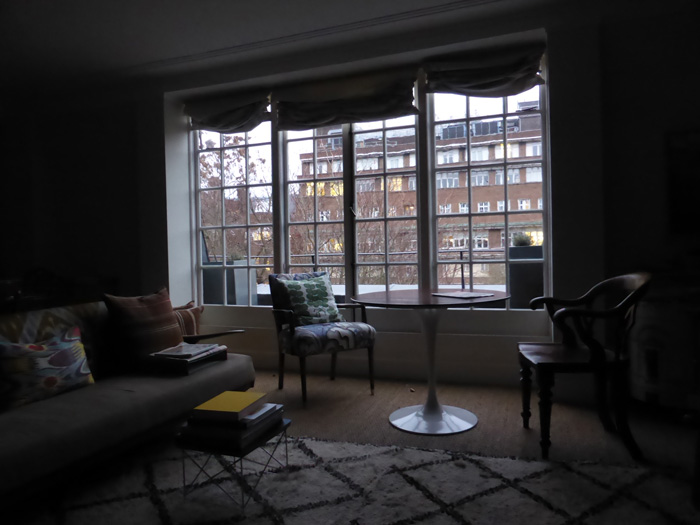 I took this photo less than an hour ago, at ten to eight in the morning. Now me – I’m an early riser. I like to bounce out of bed, even when I do have a mild hangover on a Monday morning (thank you David, thank you Chris).  But this is a bit intolerable.  It was basically still dark in my flat at 8am.  If you’re a reader in Scotland, or Stockholm, or Copenhagen, well – you really have my sympathy. I suppose we are just a few days away from the shortest day now.

There are a few things we can do aren’t there?  Here’s my paperwhites in Dorset yesterday: 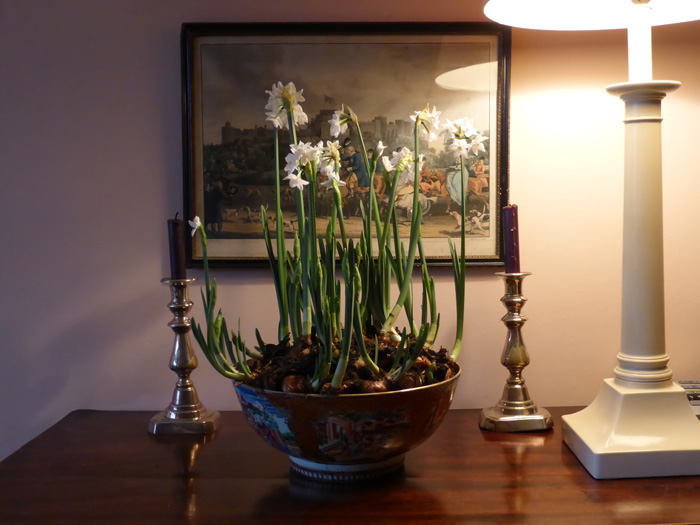 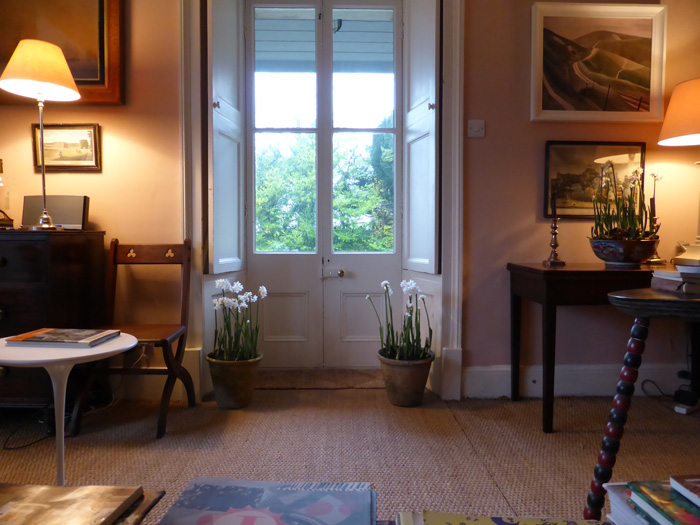 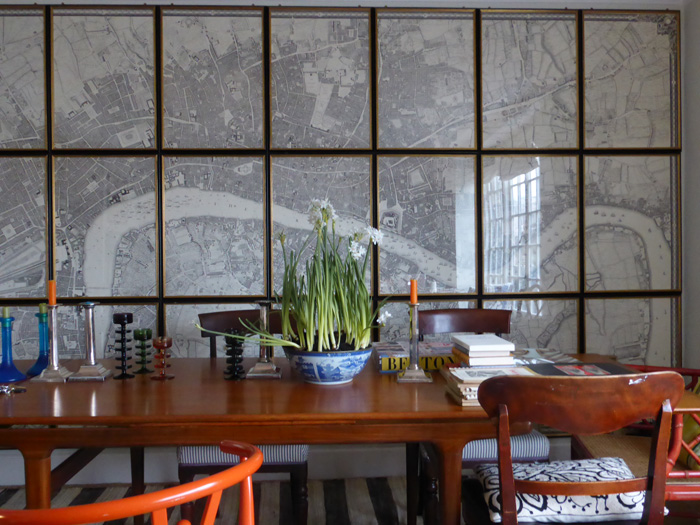 Worth those ten minutes back in the autumn potting up a few bulbs. The world is divided, incidentally, between those who love or hate the smell of narcissus.  I’m a lover. But I’ve never met anyone who is indifferent.  In advertising, this is called a ‘marmite’ moment – although ironically most people I’ve asked don’t really love or hate marmite, they’re just slightly indifferent either way.

But paperwhites are only so good.  Last week was a beautiful week in London – soft, gentle, wintry mornings every day of the week.  Now a series of depressions are sweeping in, wave after wave of rainy days.  I love the colours of grey old London in the rain, although I wouldn’t mind the snow that’s hit New York this weekend at all.  I’m having slight trouble getting in the Christmas mood so far this year.

Anyway, I’ve got three solutions to the winter gloom.

The first is to have a look at some photos I took months ago, in the height of balmy summer, up in Norfolk.  My client Bob and I chanced upon the shell museum in Glandford, and at the time back in August I said the rest of the photos would have to be Part II.  I am loyal to my word. Here they are. 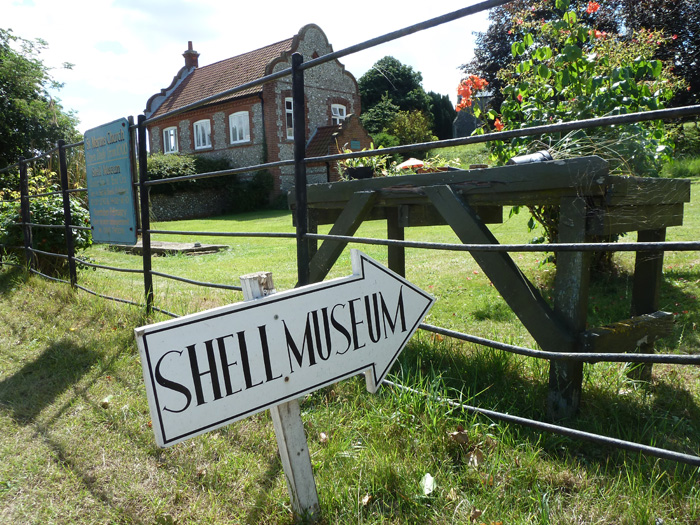 The shell museum is in a tiny brick and flint purpose-built structure, part of a series of ‘estate works’ planned in 1915 by the owner Sir Alfred Jodrell, to keep his people employed and earning an income during the Great War. 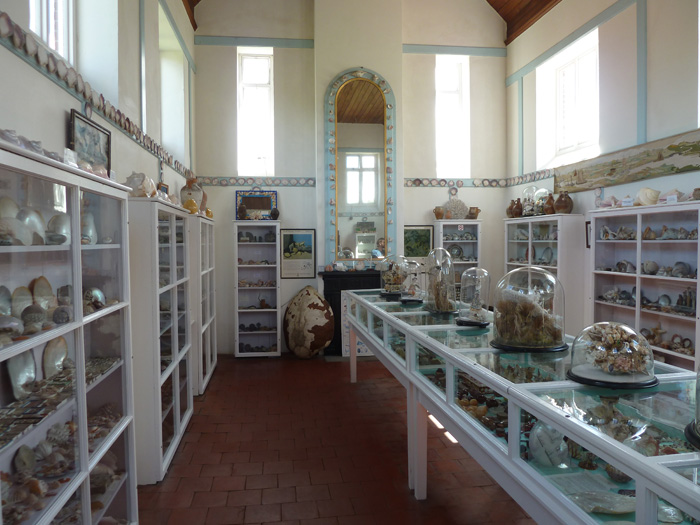 It contains the thousands of shells collected by Sir Alfred and his sisters and has been much supplemented over the years by further gifts. 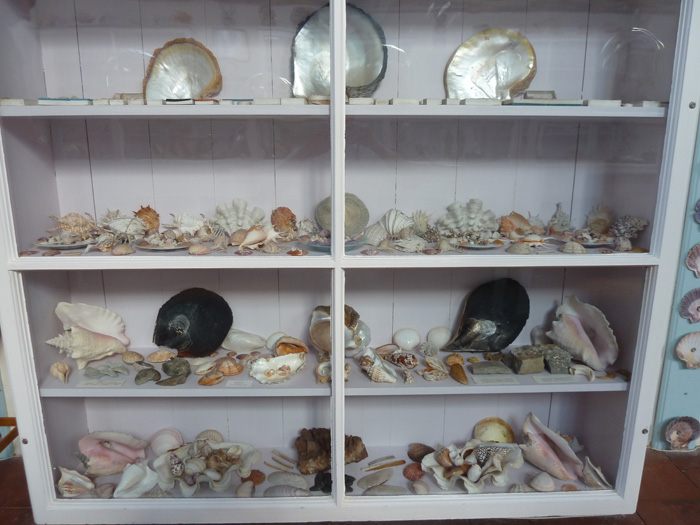 The inside of the cases is decorated a delicate pink-lilac colour. 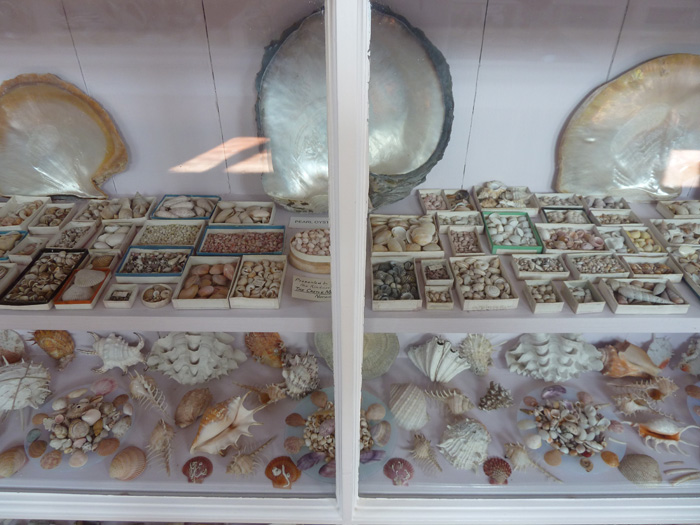 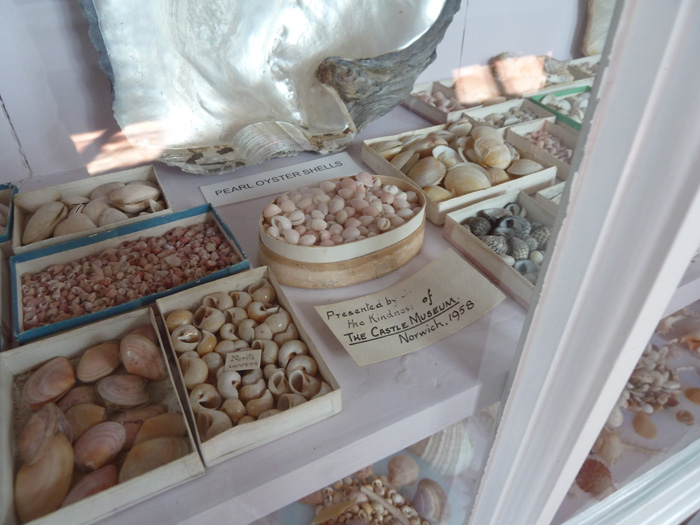 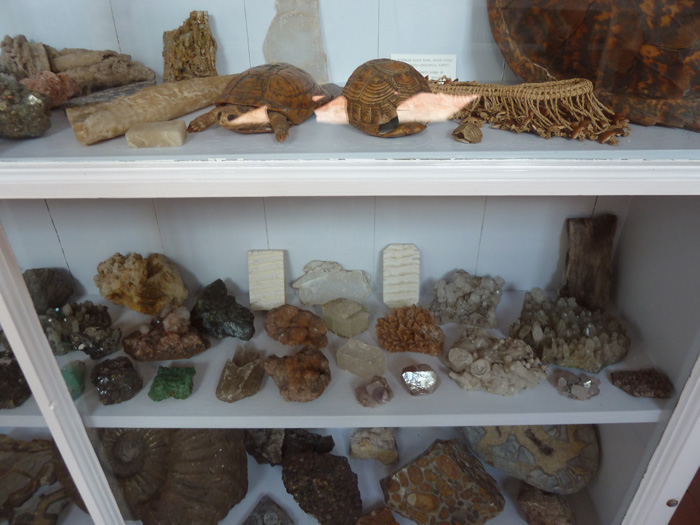 Collections of minerals fill some of the cabinets. 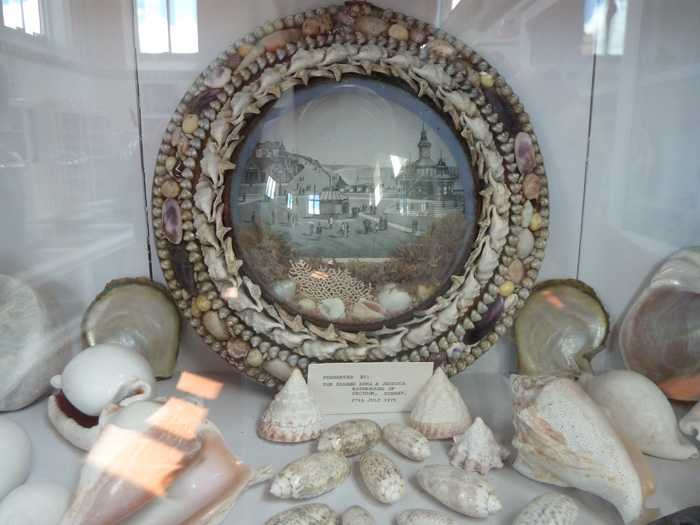 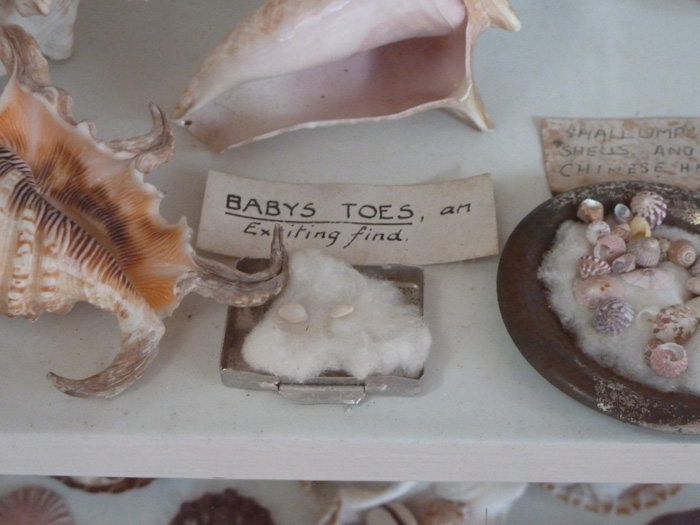 An exciting find, above, and a rather difficult one, below: 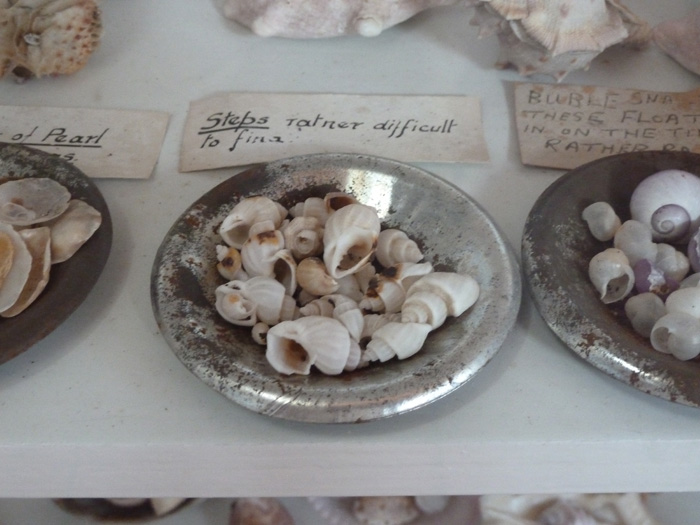 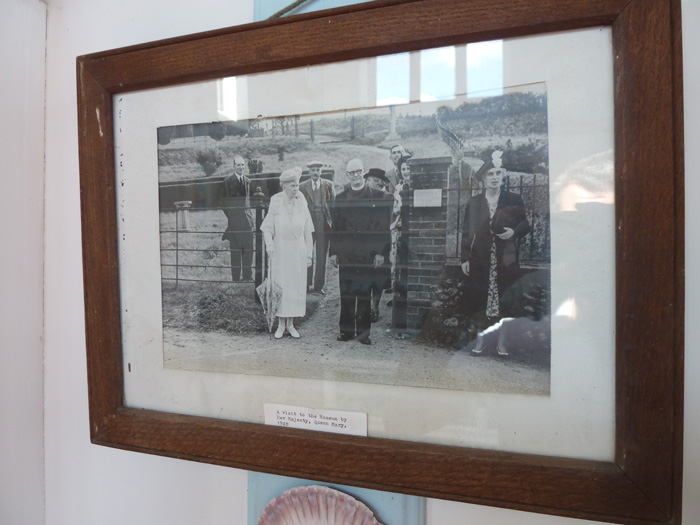 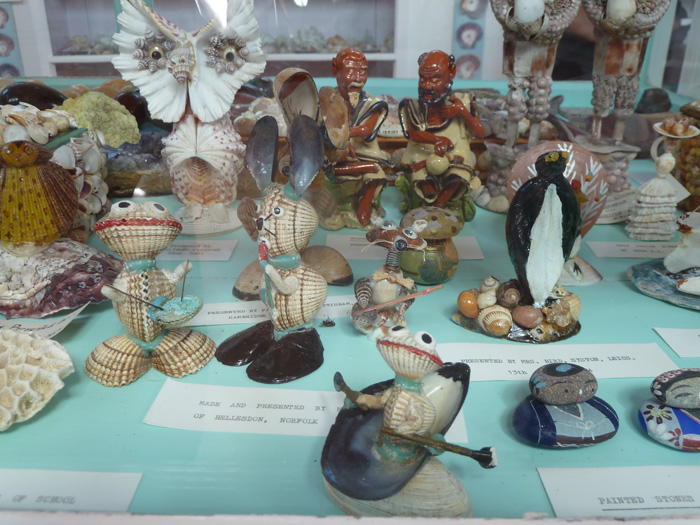 The central cases have some remarkable displays. 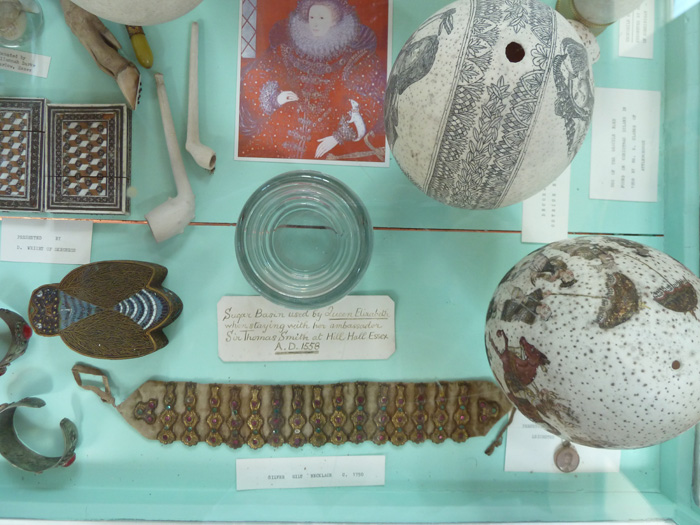 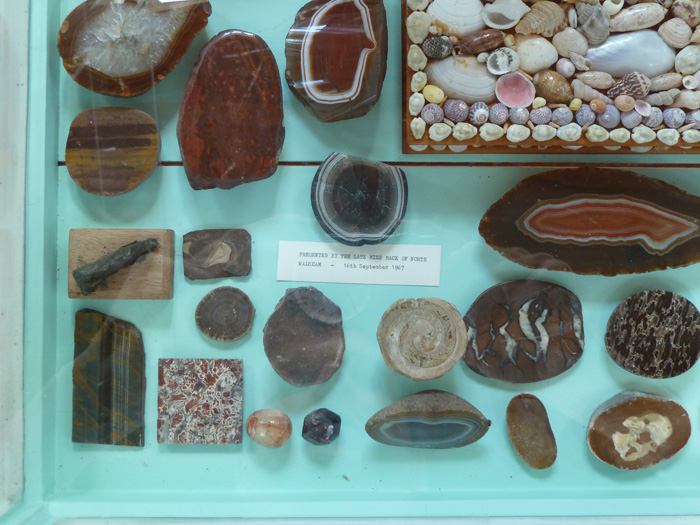 Next year’s cabinet of curiosities could be as simple as renting a double decker bus and driving from Rugby Street to Glandford with champagne all the way there and tea and cakes all the way back? 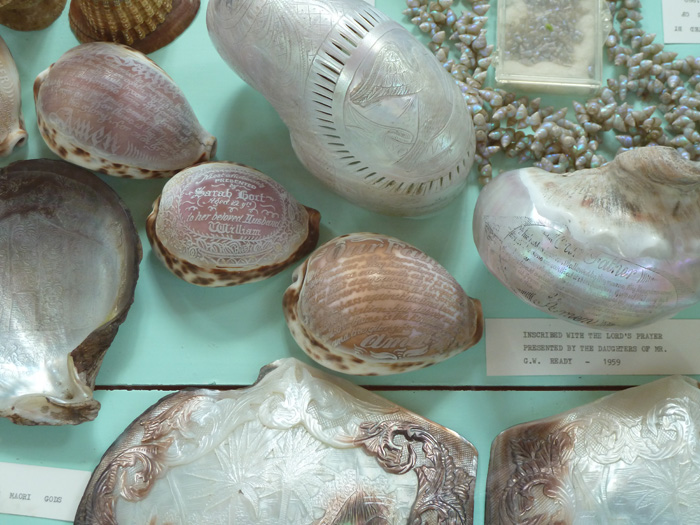 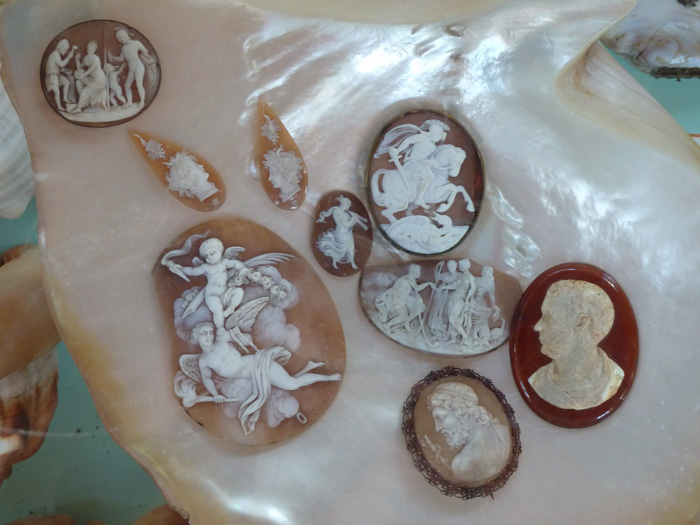 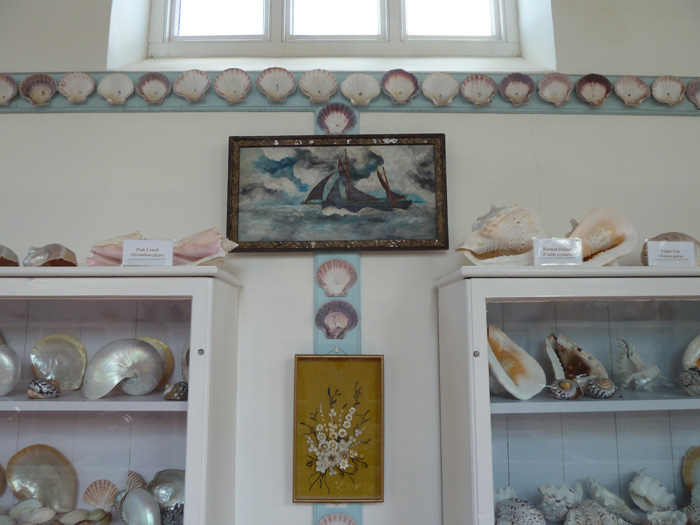 I love the row of scallop shells around the window cill ledge. 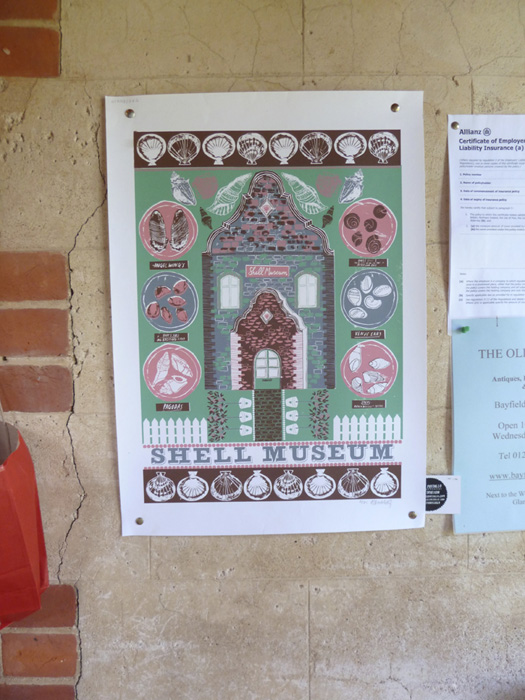 Your visit ends with a lovely souvenir poster by our friend Alice Pattullo pinned to the wall of the porch.

Okay, okay, so that’s one way to dispel the winter blues.

The second is to eat and drink far too much, and generally behave badly, which I am sure is going on a fair amount in London this week.

The third is to book a holiday to Mexico for most of January. Hello beach, hello Mexico City, hello Luis Barragan.  I cannot wait to visit.  See you there!! 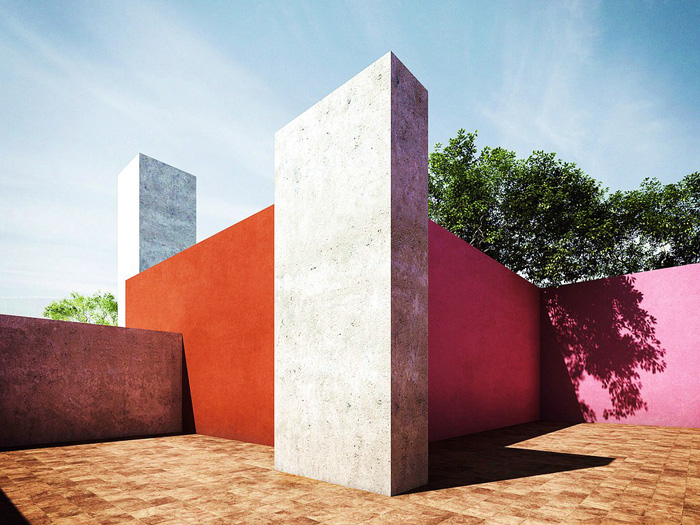 Of the three methods, I’ve got to admit I’m most excited about number 3.

Shell museum trip from London — count me in !

The shell museum is great.. its at the bottom of our friends garden! 🙂

Beautiful observations of colour as usual. I enjoy reading the comments too.

When I was a child, I loved the seaside shops in Devon and Dorset which sold the shell animals. Your post on the shell museum reminded me of those days. Someone clearly put his or her heart and soul into collecting and carefully curating all of those shells. How typical that you would be the one to find such a gem of a little museum. Thank you for my Monday morning read as always.

I am fleeing the unrelenting grey of the Canadian West coast for the aquamarine of Hawaii and the functional architecture of Waikiki (though a visit to the Doris Duke house ‘Shangri-la’ may provide a break). I will find the best shell on the beach and bring it as my contribution when I arrive for your rolling Cabinet of Curiosities next year!

i must go off to the shell museum, never heard of it, and yes it is a day brightener indeed.
where in dorset ben? i lead small groups around dorset only, would love to visit your gardens
cheers
debra

Love the divided map, but how about the shell grotto here? http://tdclassicist.blogspot.co.uk/2012/03/menagerie-part-ii.html

I love narcissus! I have them in the office, and also at home. I pick up little bowls and deep dishes and give them as presents.

Oooooh, the shell mirror. Could I make one I wonder, to while away the winter evenings? Funny about the narcissi smell, people are even more divided about hyacinths. I love their scent, but only if they’re white! Next Saturday is the winter solstice, and then the days start lengthening, hooray. I plan to get up at dawn like the Druids, and pray for spring to hurry in….