If I ever get around to writing another book, one of the reasons will be to publish photographs of my friends Kim and Pip’s farmhouse in Hampshire. I was staying there on Sunday night and it’s about as close to perfection as you can get without things being too perfect (which as we all know, is in itself imperfect and not somewhere any of us should go). 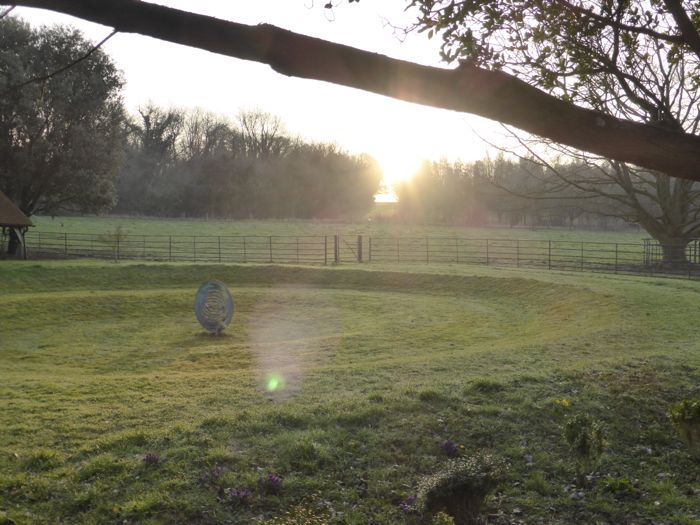 Kim Wilkie and Pip Morrison are landscape architects. Kim is, of course, brilliantly well-known, and if you don’t already own his beautiful and beautifully-written book, Led by the Land, then your shelves have a gap which should be filled. Kim and I have a secret fun time sending each other occasional photographs surreptitiously taken in bookshops of Led by the Land shelved alongside English Decoration.  I can’t say that there’s a very good shelving system in place in these places, but it’s surprising the amount of times it happens. Which makes me quietly happy.

When I’m working on any house project where we need to collaborate on landscape, I have to decide if the owners are Kim people or Pip people.  Kim people are not very keen gardeners but they love landscape and wide grassed earth forms. Here are Kim’s beautiful terraces at Heveningham Hall in Suffolk, which will surely rank as one of the great English landscapes of the 20th century. So he and I are working together on houses on the south coast, and a beautiful farmstead in Oxfordshire.

Pip people are rather more traditional, and like Yew hedges and flowers. Pip is I think the rising star of the gardening world. His talent is kept rather stealthily out of sight. if you try and google him, you won’t find very much at all. He’s the only landscape architect I know who doesn’t have a website… He’s too busy working to have time for that. Early days yet, but here is the beginning of his planting scheme being installed at the Orangery and pool house that I’ve designed in Oxfordshire. 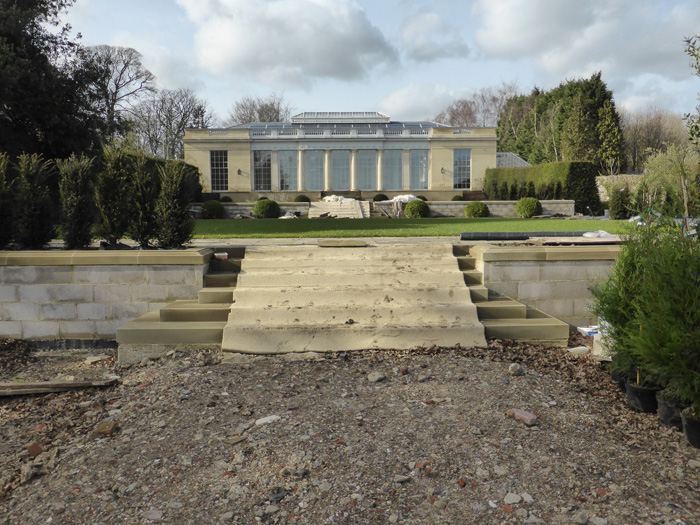 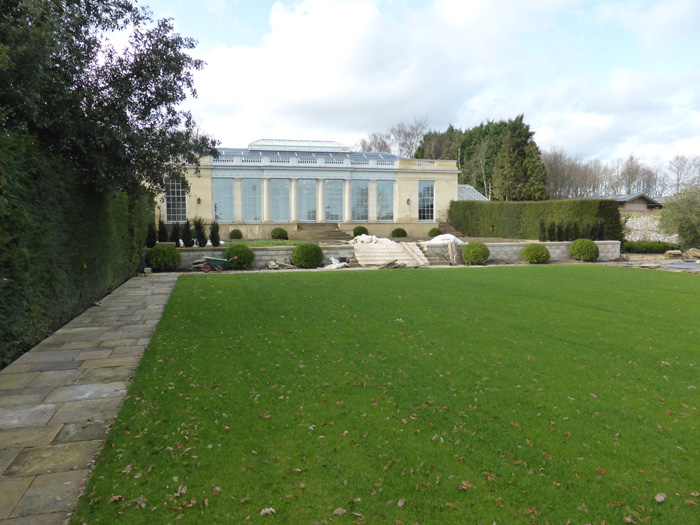 The land used to slope steeply to the south. Pip’s brilliant intervention was to create level terraces as a platform for the building to float above. At the upper level is a box parterre that gives way to the expanse of lawn on the terrace below, with further steps down to the lowest ha-ha walk that forms the southern boundary of the garden.

So we’re working together a lot. What’s really fun is when there’s an excuse to stay one night on the way back from to London.  Which is what I was doing on Sunday, because Kim and I are working together at a beautiful farmhouse in the Meon Valley in Hampshire, and we had a site visit first thing on Monday morning. 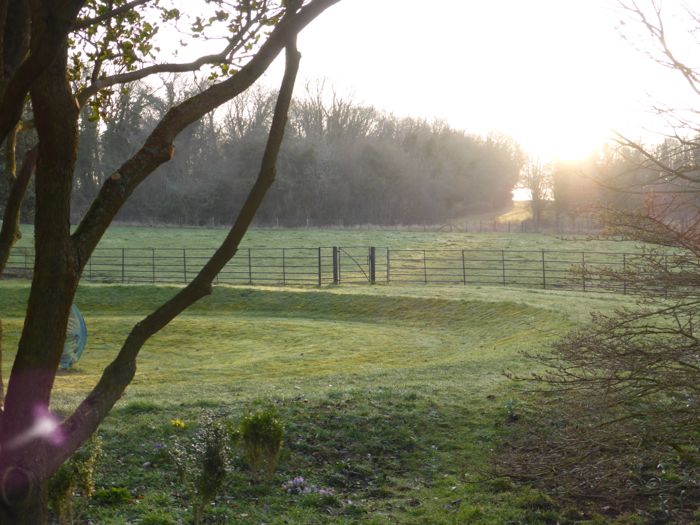 At first light, the garden is magical. A series of buildings are interspersed around two farm yards. The first is grassed and now forms a garden. The second is working and filled with Kim and Pip’s menagerie of chickens, geese, ducks and turkey. 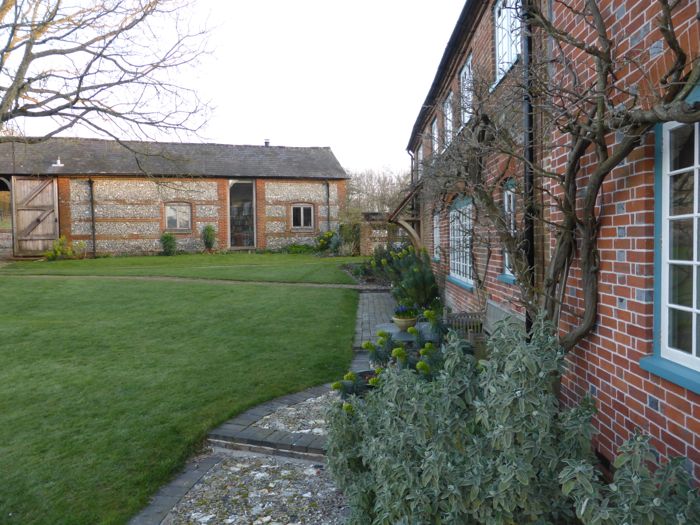 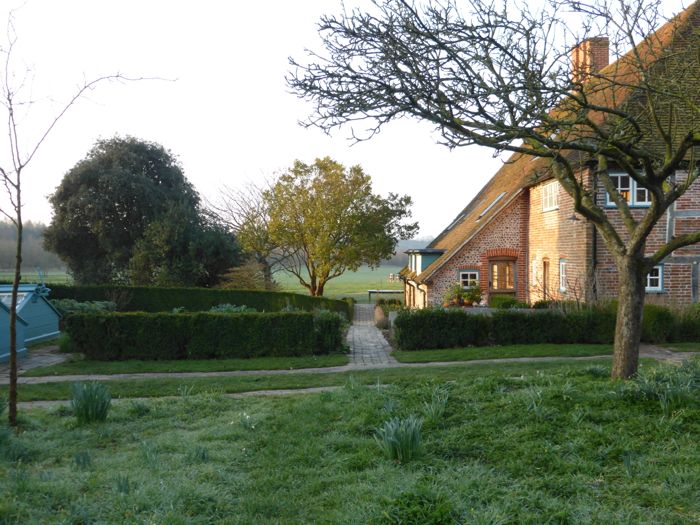 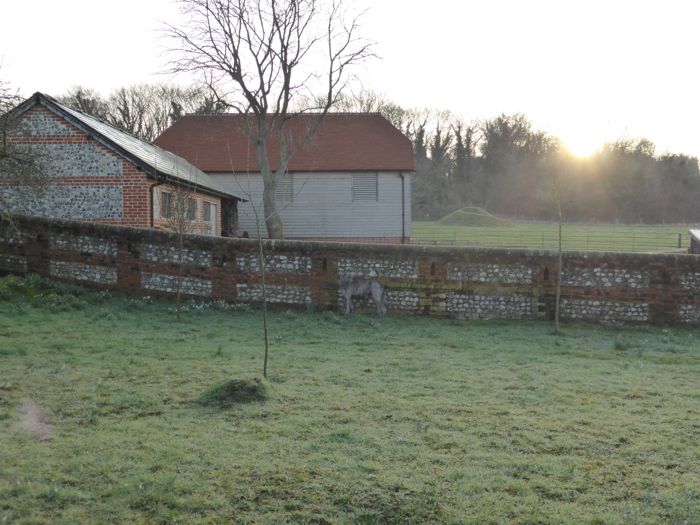 Note the camouflaged hound against the flint wall. 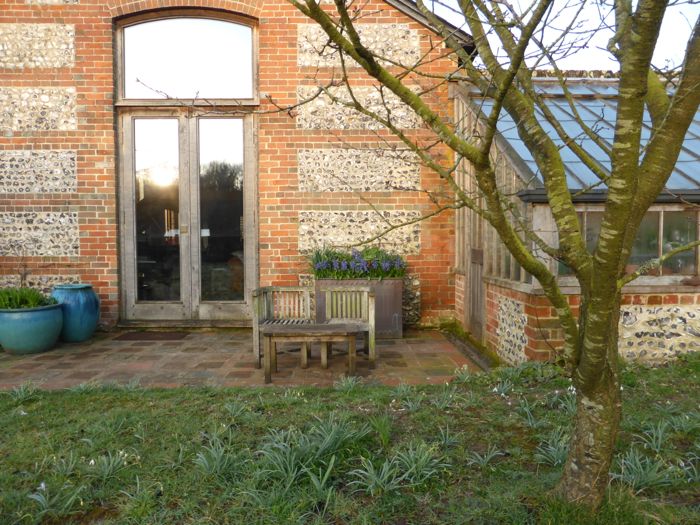 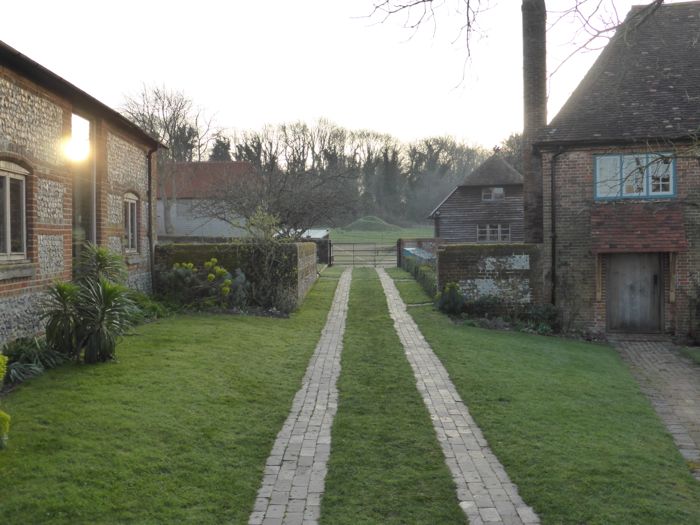 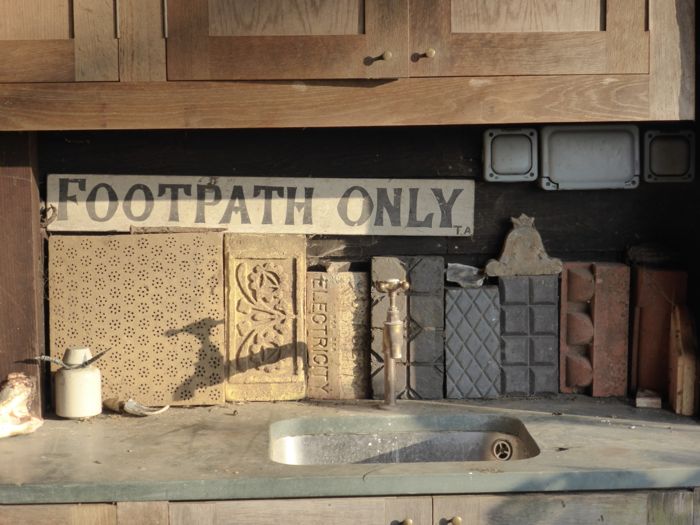 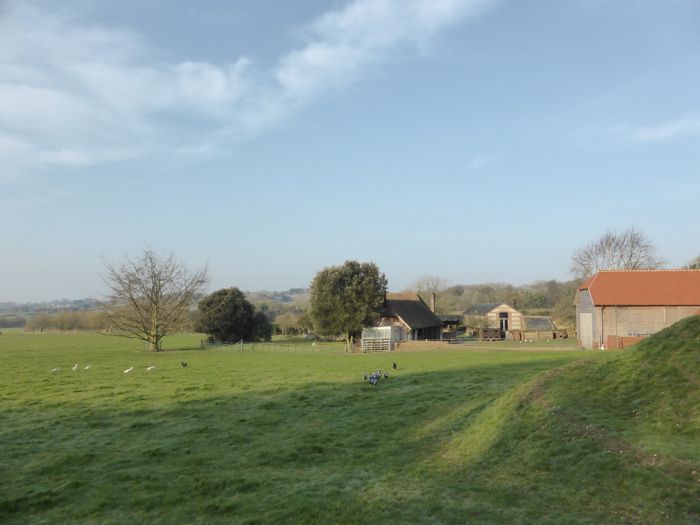 The complex takes on the quality of a Dutch 17th century landscape painting, where nothing jars, and every building has a quiet purpose. 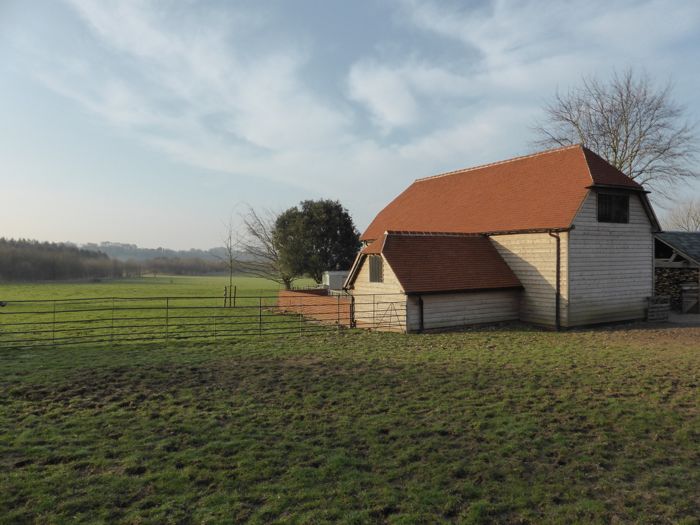 The new hay barn, which stores woodchip for the boiler. 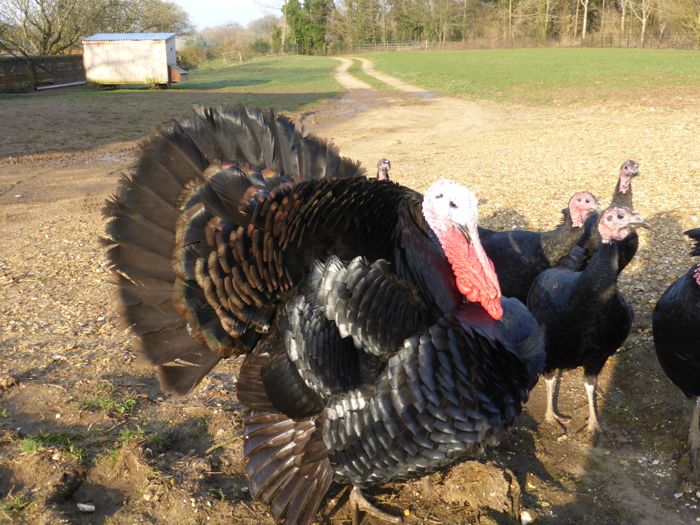 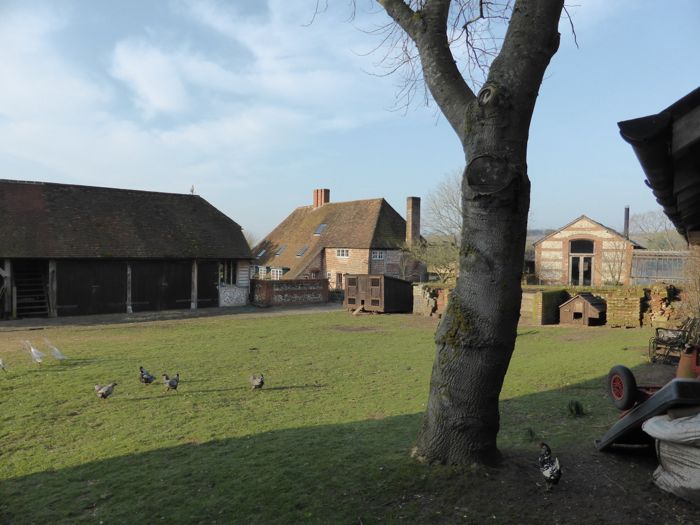 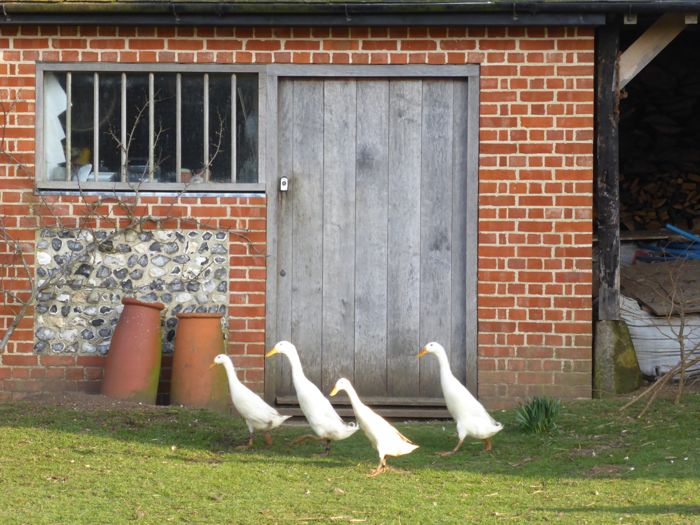 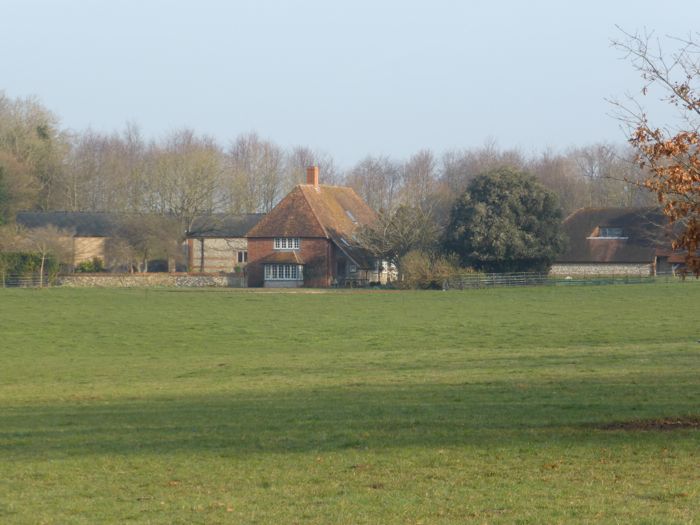 True to form, the landscape and woodland is Kim’s territory; the garden is more Pip’s. 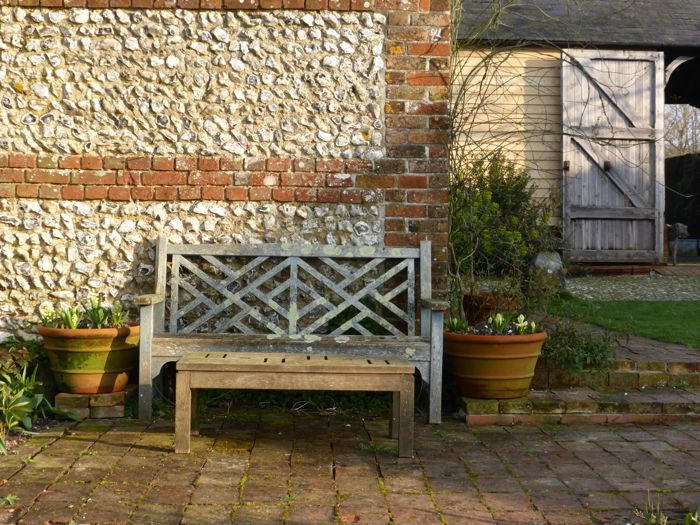 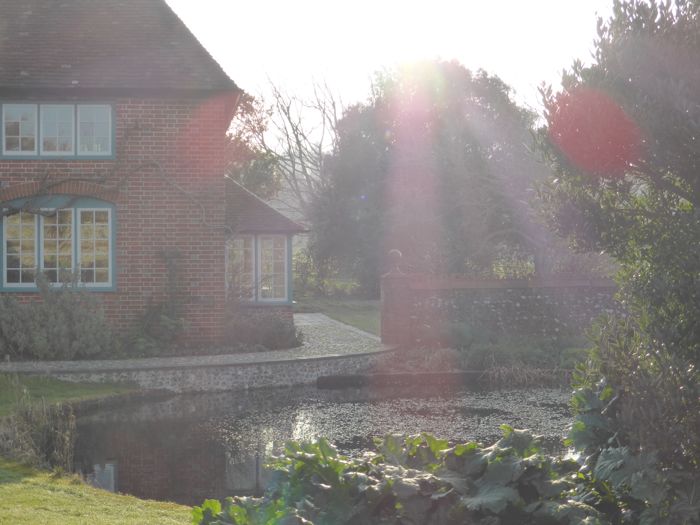 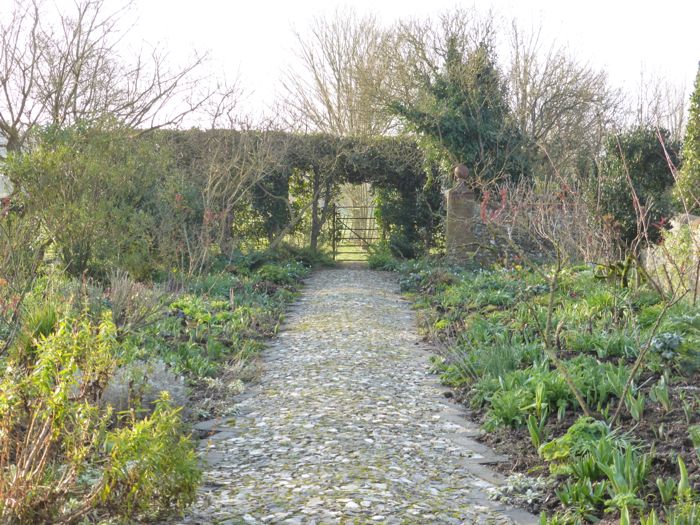 Pip’s double border is about to burst into life. 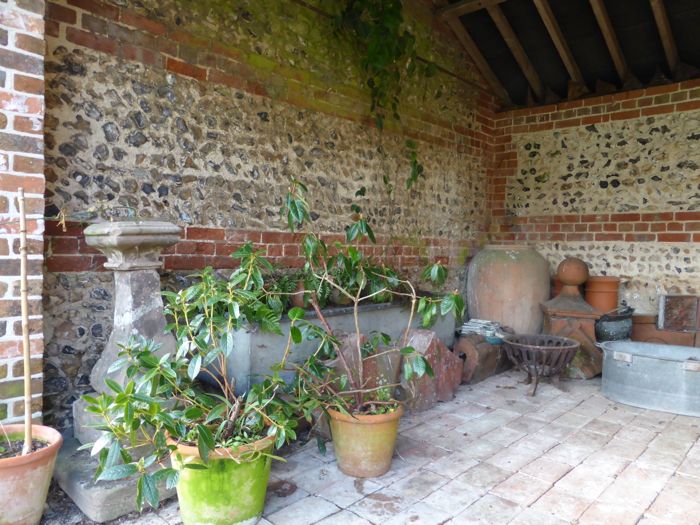 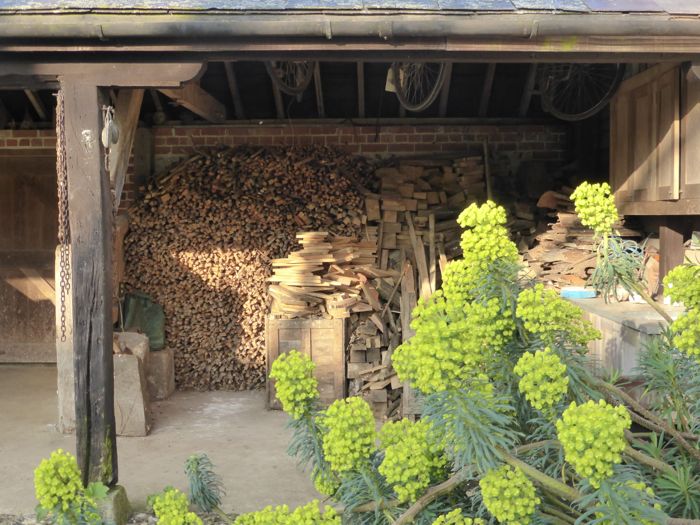 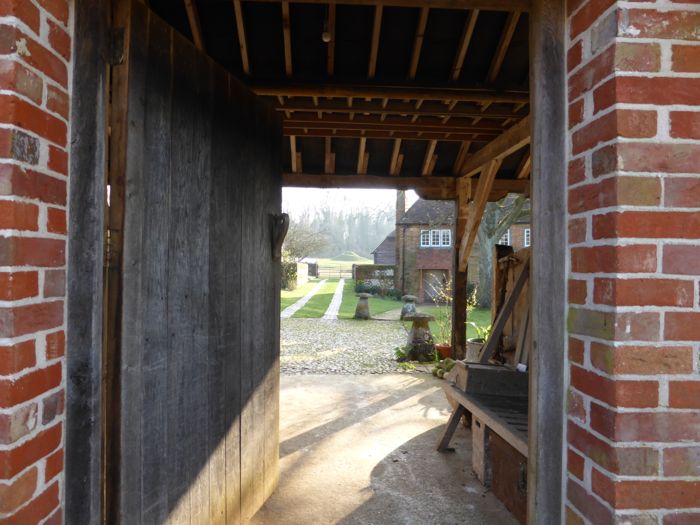 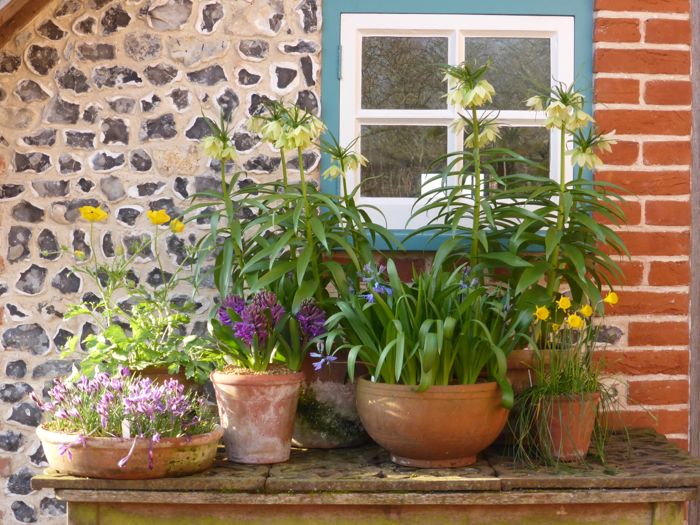 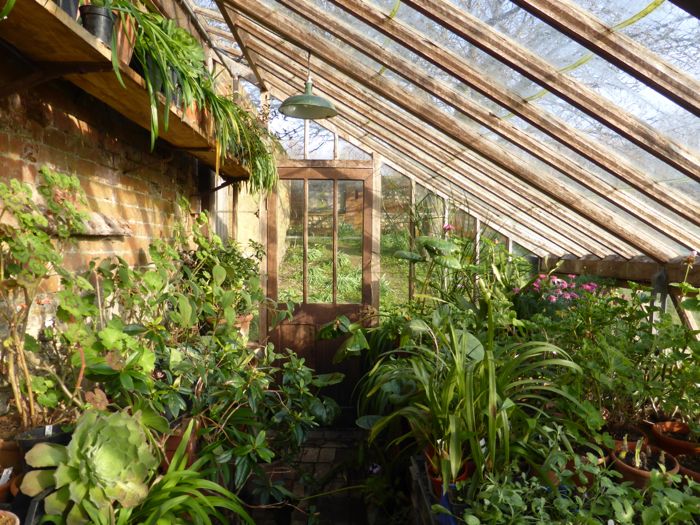 Wherever you look are incidental scenes of great beauty. Kim and Pip have restored the ancient timber farmhouse that Kim inherited from his parents with incredible sensitivity, in a way that respects the fabric but with a lightness of touch. 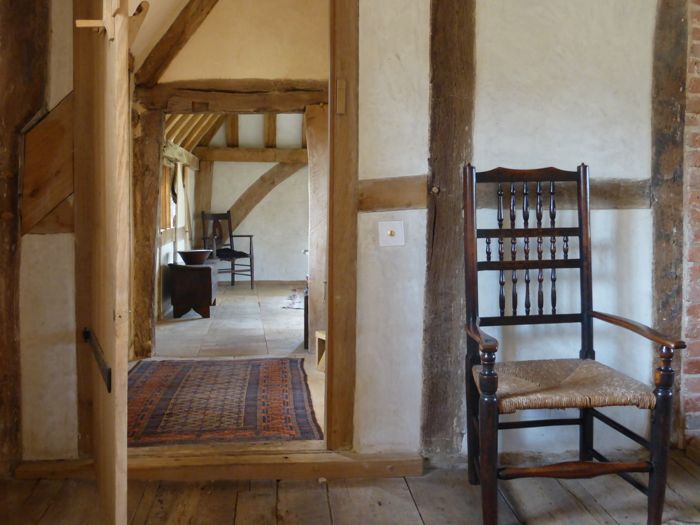 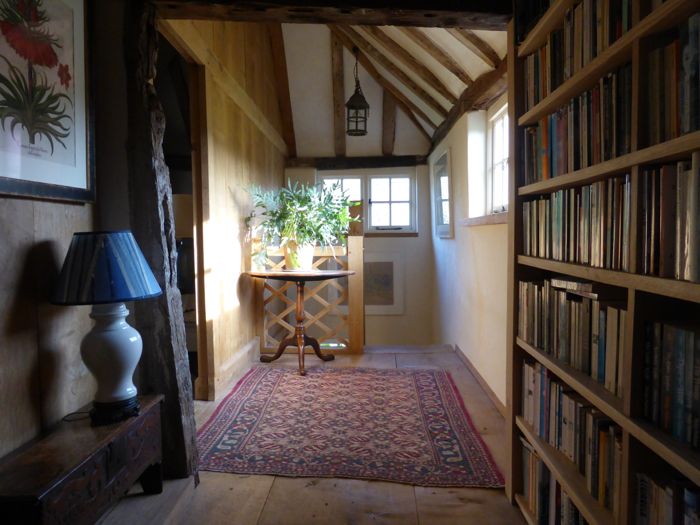 I warned the boys, over breakfast, there was about to be a massive invasion of privacy but I’m not quite sure they took it in. So you better be careful if you invite me to stay… Because I’m inclined to want to shout about beautiful places, and two of the most talented people I know. Kim and Pip are rather retiring types, so maybe I won’t be asked back in a while.  Luckily they never read blogs, so perhaps they won’t immediately find out. But I hope you agree it’s been worth it.

Thinking about you guys as I was walking in the moonlight on the bridge out to the tea house. Please come back to Essex/white pine and stay longer than 2 hours !!

The angel’s in the detail! Thankyou for this. I’m drawn to the Kim Wilkie grass landforms, but Pip’s borders are beautiful too.

Breathtaking! The photos are so beautiful. I could almost smell the fragrance of the land. Thank you so much.

Every picture is stunning. I don’t suppose you happen to know who made those beautiful cabinets in the room with the bricks and basin?

Do please write another book…….

Love the garden and house…what is that ovoid piece in the center of the grassy amphitheater? It reminds me of a piece in the garden at Chatsworth…I will try to find the photo I took plus the placard with the artist’s name and information.

And those are rather rare ducks…Prince Charles has some like them.

Thank you for sharing your experience of your friends’ farm. It is truly serene in the morning light and the interior is timeless.

Terrific pictures as always and a beguiling narrative. A really positive start to the week.

I’d love to know what camera you use. Is it still the Panasonic Lumix you mentioned in one of your Siena pieces? I do realise that it’s the eye behind the camera that makes the difference (!).

Goodness they are talented aren’t they. Love the house and especially the greenhouse. I can never resist old greenhouses.

It looks idyllic – and a coincidence, I have just visited a nice old house outside Winchester which is in the book (they had a pile of about a dozen copies) and they have landscaped their garden like an amphitheatre, with a zigzag path running down the middle; great fun.

to a cozy minimalist… this is a dream.
the terraced lawn is incredible.
i want to walk there barefooted in a simple long white dress.
you’ve captured morning light . . .
and sunlight and shadow both inside and out so perfectly.
i mean so . . . delightfully imperfectly! she said with a smile.

What a lovely place. You have a nose for this things. I think I detect a slight homage to Lutyens in the interior, which, incidentally, had just the right amount of austerity. Outside the arrangement of terracotta pots and bowls full of spring plants was very effective; definitely worth copying.

Please thank them for allowing us this glimpse. I can’t decide if I’m a Kim or a Pip person. A Kip perhaps. I love the sloping ducks.