…was the wise advice Will gave me a couple of weeks ago. So true.

I’d been asked by the Soane Museum to give a talk, last Monday evening. “What’s it meant to be about, Mike?” I asked the excellent and soon-to-departed Mike Nicholson who has done brilliant fundraising for that fantastic museum for well over a decade.  “Well, just talk about yourself, Ben… what you are up to, but especially what your influences are. And the key to success – lots of photographs in the slide show”.

Easy, I thought. Not unlike the blog, perhaps? But as the day drew nearer, I realised I wasn’t quite so practiced at talking about myself as I might appear. Strange to believe, but it’s not quite my favourite subject.

But it did take me on a little journey down memory lane. When I was reflecting on what got me going and why, I realised how much I owed to my wonderful Art Master at school, Rob Woolner, and to the incredible atmosphere he had made in the “Art Shack” which was the sole beacon of civilisation in an otherwise bleak environment whose purpose was to prepare you for university, the military or accountancy, as far as I can tell. I wanted to go back and have a look, for the first time in 24 years. 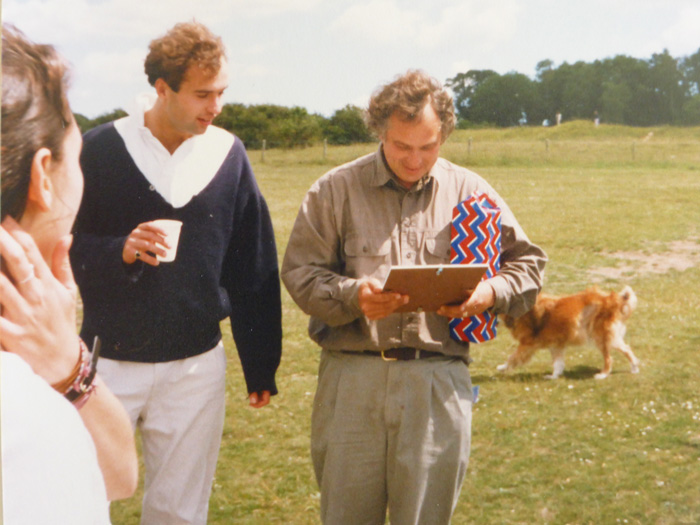 Here’s Rob, at the summery, breezy, farewell picnic that we had out at Badbury Rings, an ancient hill-fort near school, the sort of landscape that inspired his incredible paintings and drawings so deeply.

I can still remember that day well. 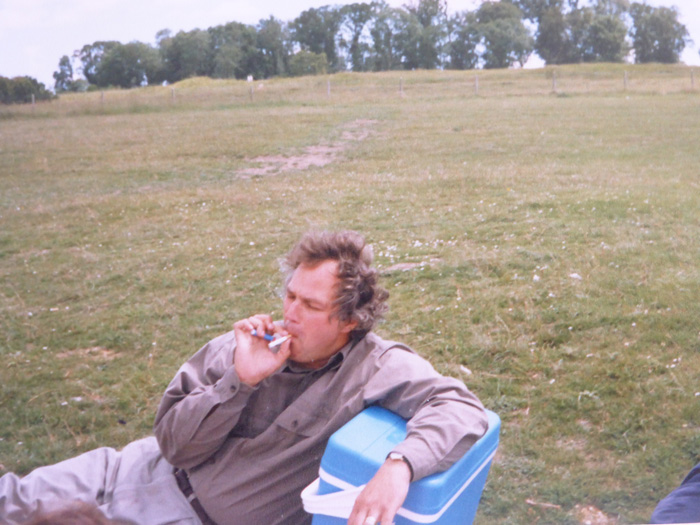 It was a perfect afternoon.

The art school was housed in a fantastic late 60s building designed by the then Art master, who was called Robin Noscoe. Robin still lived in the local town, Wimborne, and I have strong memories of his beautiful house, Garden House, which he designed and built himself. It was demolished by developers in the 90s, but thankfully not before being photographed for World of Interiors. One of these days I shall lose myself in a whole load of back issues and see if I can find the photographs there to show you. It was insanely beautiful. I loved my days when we went up there. Somewhere, too, Derek Jarman (one of Robin’s pupils) made a film about it for BBC2. I’ll see if I can search that out too.

Robin was influenced especially Alvar Aalto. The art school was a stripped back, black-painted building with great tall windows of glass and white walls and a beautiful reflecting pool in the front and an enclosing courtyard at the rear. 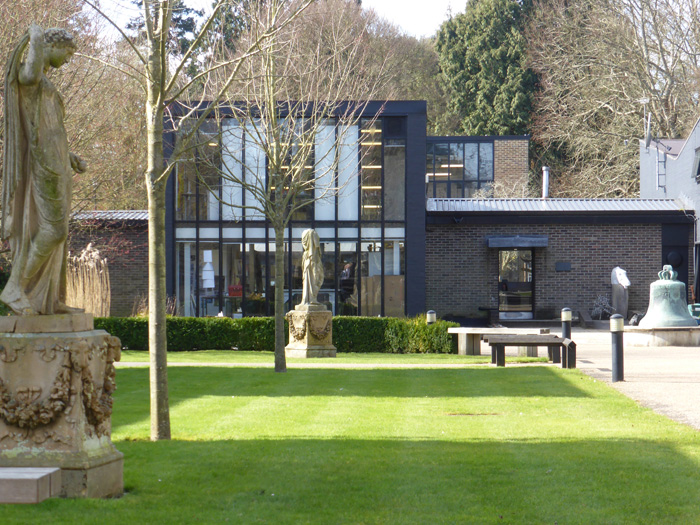 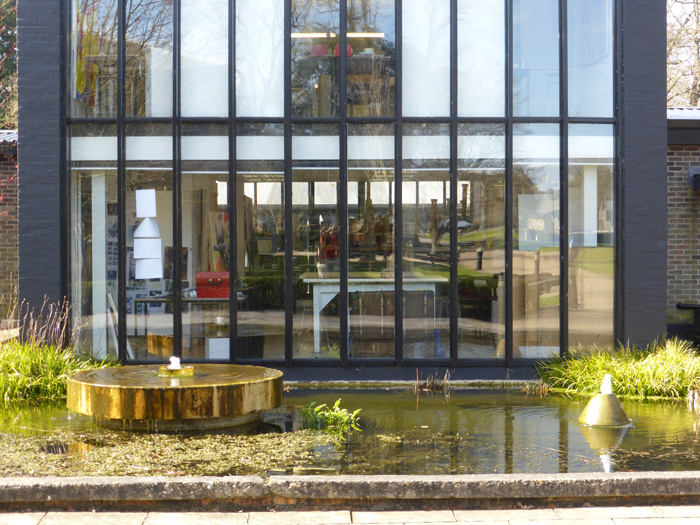 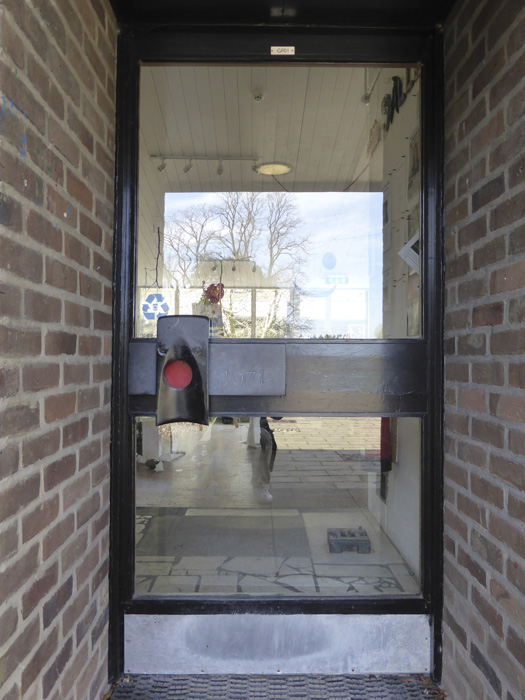 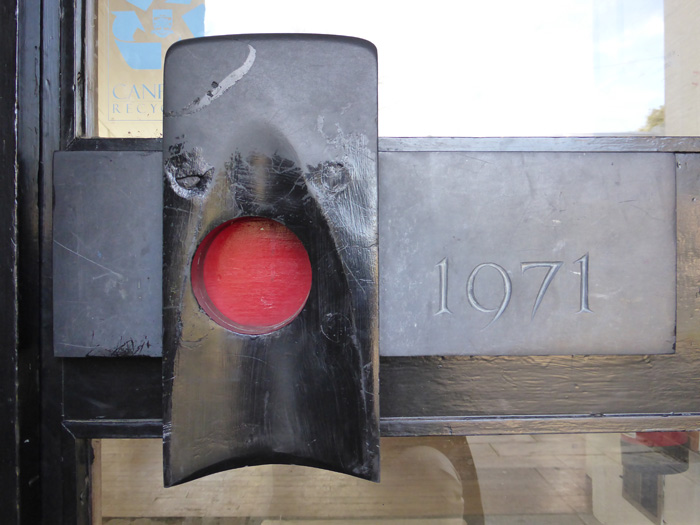 Everything was the in the details, for him. 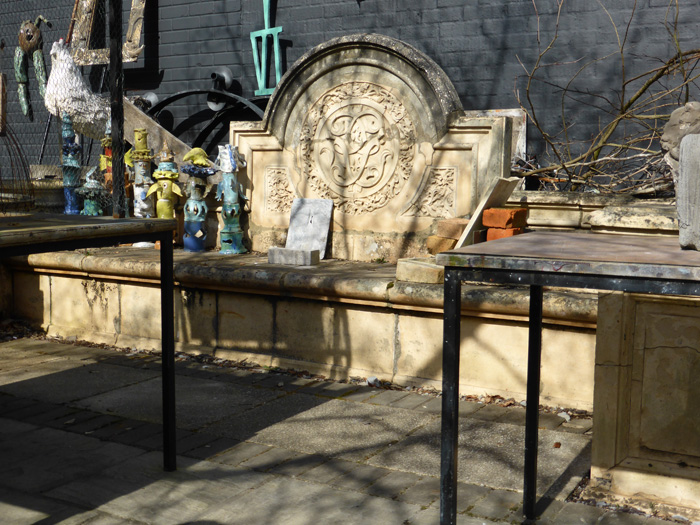 In the courtyard he reclaimed vast bits of architectural fragments from around and about the school, which had been the fabulous Victorian pile of the fabulously wealthy Guest Family.

Inside, the walls were breeze block. But Robin was building the art shack at the same time as, just down the road, 18th century Poole was coming under the demolition sledgehammer, whole streets being cleared to make way for grim modern development. He’d get down there and rescue old doorcases and other fragments.  These were incorporated into the new art building with brilliant effect. 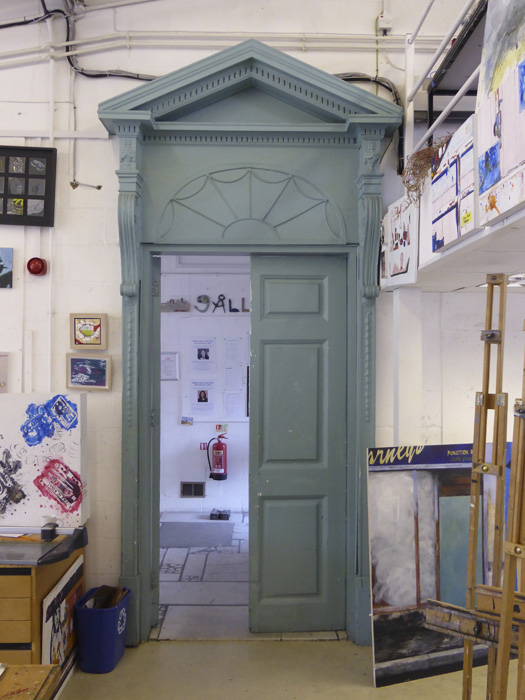 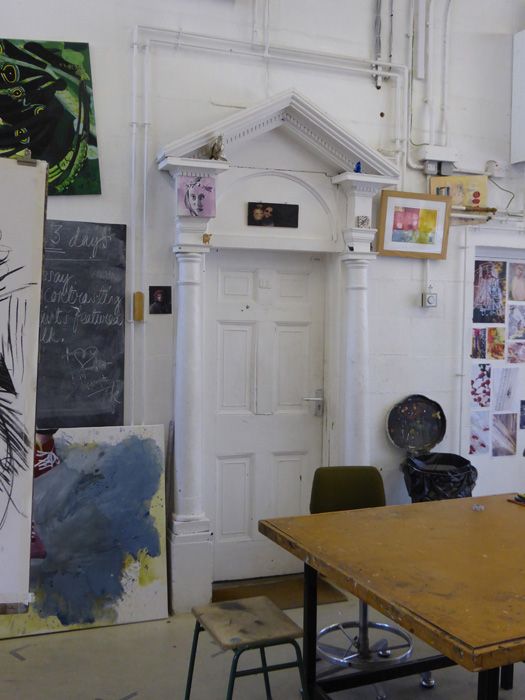 The floor of the entrance hall was a mosaic of white marble pieces. 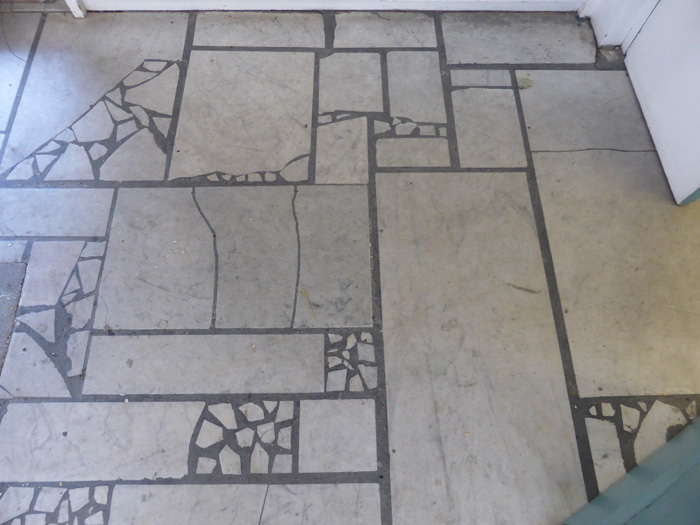 Perfect. As I say, Robin’s world was all about the tiny details. Here, just a bit further down, is the entrance to the Outdoor theatre that he also designed and built, and which was constructed in part by the 6th formers in the late 60s: 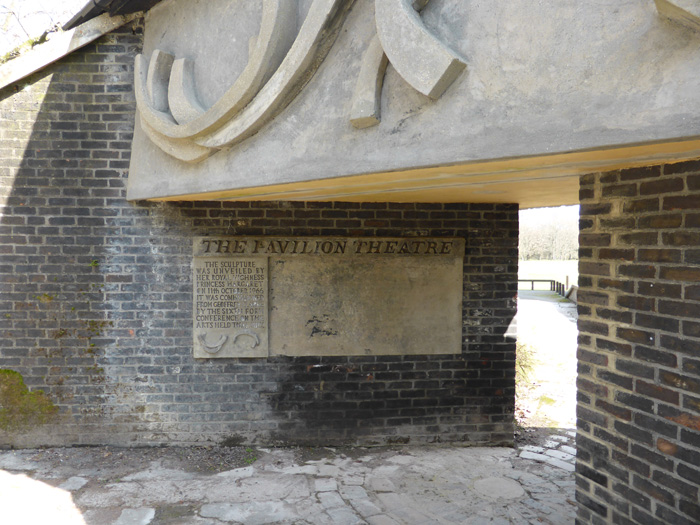 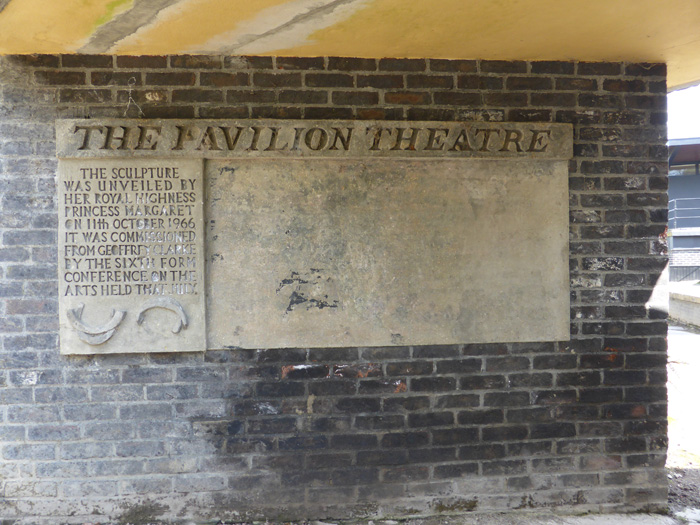 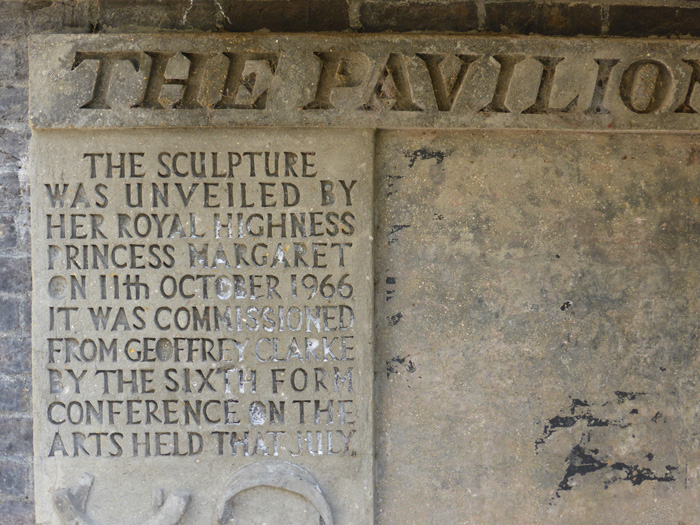 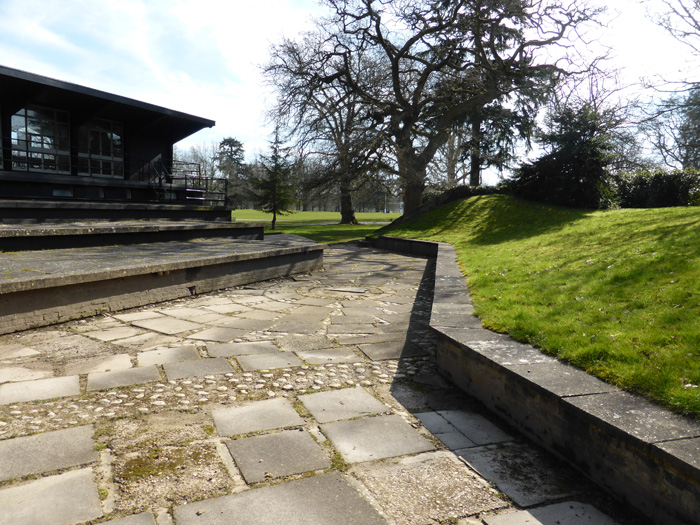 Many a summer’s evening was spent out here working on the annual open-air Shakespeare that we used to put on. I love this building. A few years ago I heard it was slated for demolition and replacement with something a bit more ‘appropriate’ by the then, how can I say, rather “keen” headmaster. The plans died when the old boys from that era went on revolt. Good.

So, a couple of weeks ago I found myself coming back to school to investigate it all, armed with a camera and a flood of memories of a place I’d last been to when I was 18 years old.

Many places felt very familiar. All a bit smaller, all a bit less strange and terrifying.  A bit weird above all. My great sadness, if I’m honest, was the Art School Library. Before I show you a photograph, can I describe it?

This was a little room, which you entered through the smaller Georgian doorcase that I photographed above (in those days, I am pretty certain, it was painted a slubby grey colour not white). You entered what felt like the den of a great painter or renowned thinker. A wide, low, crumbling leather Victorian sofa faced a wall of bookshelves lined with beautiful art books. There were other old armchairs and a low coffee table that at all times was piled with latest magazines, Craft, Architectural Review, and all. There were table lamps and a creaky old TV and video player where we used to watch films of Picasso at work. There were plants and bits of sculpture and basically it was the most civilised environment in the whole school.

In a cunning plan to prevent my ever doing any sport in my sixth form, Rob invented a new role for me. I was the ‘Art School Librarian’ which required me to re-catalogue the shelves. I’m not quite sure how we persuaded anyone that it needed hours and hours of work, but somehow it was part of the mix that meant I completely avoided sport in the last two years of school. (That, and my toxically juvenile sense of humour which really annoyed some of the sport staff – who, let us face it, were never renowned for their sharp wit or nimble intelligence).

Here it the Art school library today. I was secretly a bit devastated. It’s become an office for the art & design staff. 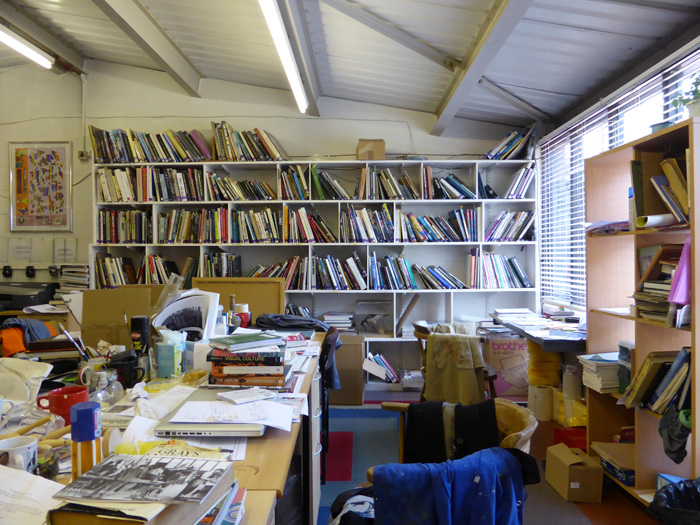 I couldn’t help being depressed. I hope I didn’t show it too much to the current members of staff who were showing me around. At least the beautiful old Victorian cane wheelchair that lived in one corner had survived. But that was all. 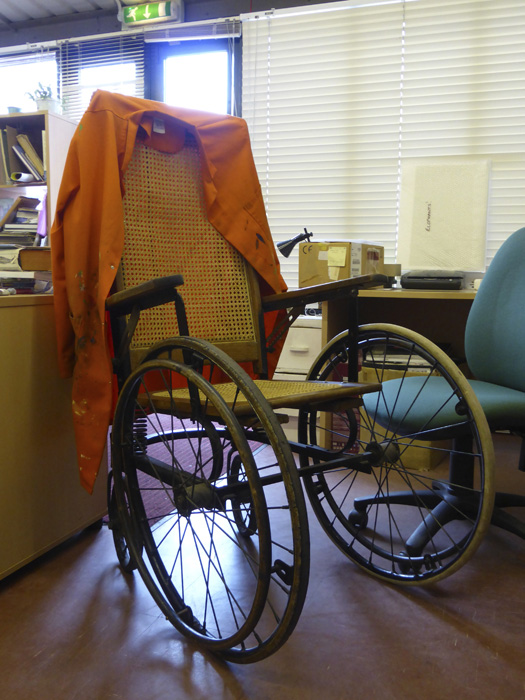 As Will says: never go back. Memory will always be more powerful than reality.

It was a funny thing but this weekend, after all the strangeness of this trip just a week before, I was clearing up stuff in my attic down in Dorset. I found a box of old school reports. 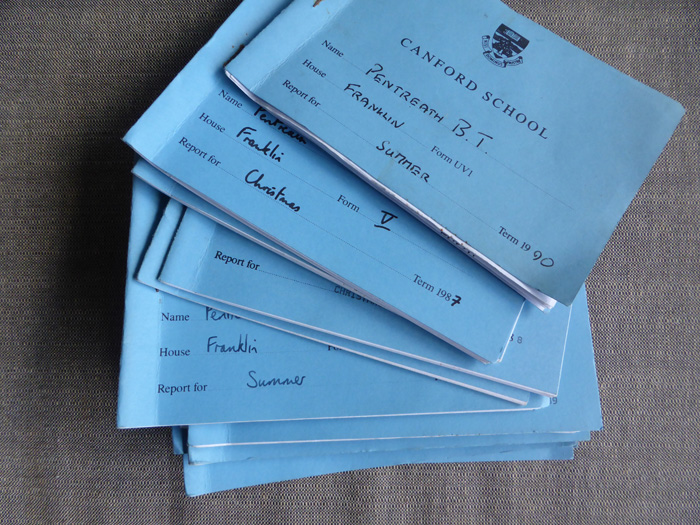 I won’t bore you with them all. I think old school reports are probably, a bit like stories of dreams over the breakfast table, rather more interesting for the teller than for the audience. But it was interesting reading back. All the nerves and neuroses and activities of that strangest period of your life – 13 to 18 – were there. And as my great friend George is known to say from time to time, ‘you are as an adult who you were as a child’.

Here’s my final History of Art report from Rob: 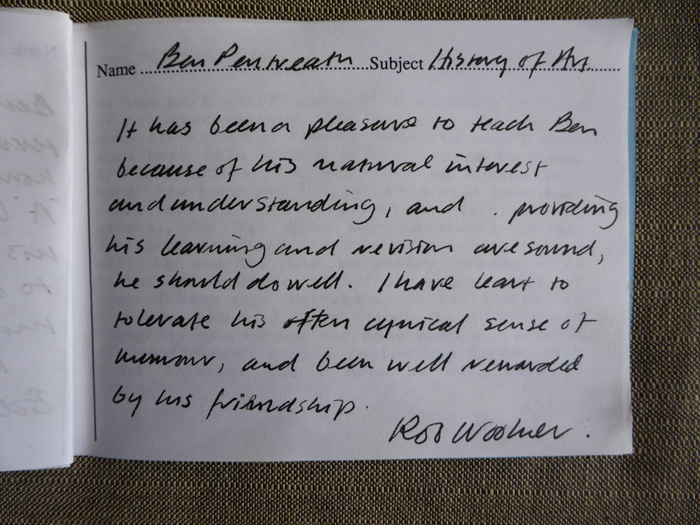 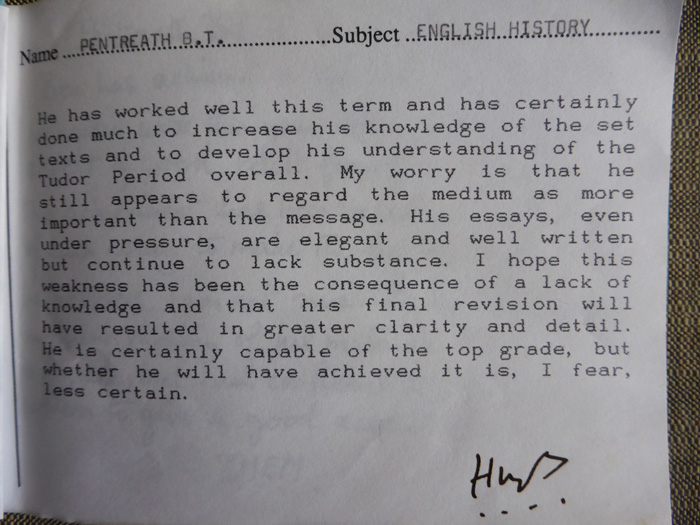 My great history teacher, Mr Baynham, was also my director of studies: 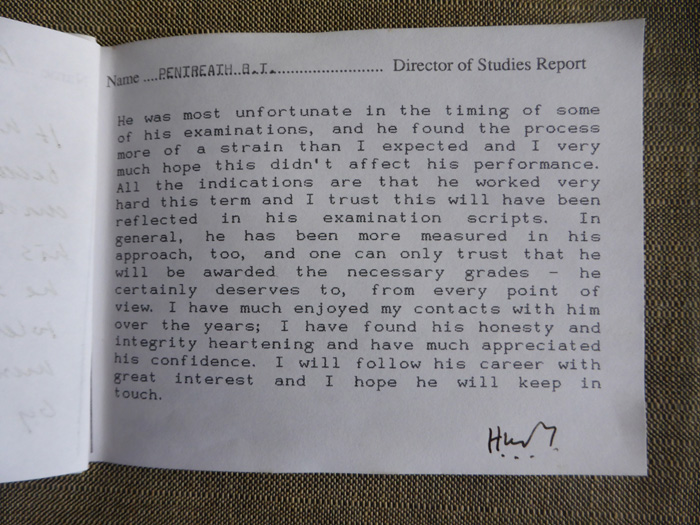 Oh dear. I never really kept in touch as I wanted to. It’s hard. I think I really wanted to escape school if I’m honest.

The last report is from my 6th form boarding house. I escaped the main boarding house – which was not the place for me after my incredible housemaster was replaced by someone new in the sixth form – and for my last 2 terms at school I moved to a beautiful little row of Victorian gardeners’ cottages, which were called the ‘Lorifer’, home to a very distinguished bunch of 12 rebels and misfits (I was a misfit rather than a rebel): 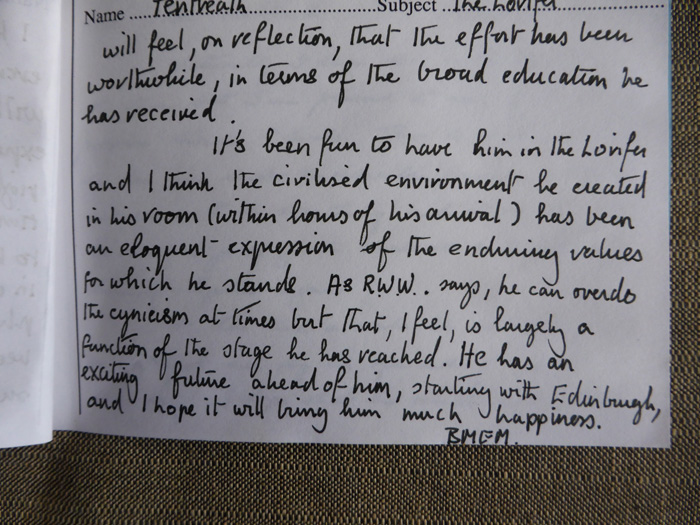 Can I be honest? I think I still need to control the cynicism from time to time.

That’s all from me today, but starting this week, Bridie is going to be featuring from time to time on the blog with a mid-week posting; some of the fascinating and enriching stories of the suppliers and many talented people we are blessed to work with in the shop. I hope these posts are of great interest to everyone and will help showcase some very un-sung heroes to a much wider audience. Starting… with Bridie’s very own studio above the shop at 17 Rugby!

So please look out for Wednesday postings, and please continue to give Bridie and me feedback on anything we can do to improve the website, blog, or stories you’d like to hear about.

It was a very enjoyable journey through your past and, as as someone else said, brave of you to put your youthful self on display. Having read my kindergarten reports cards several years ago, I will heartily agree with your friend George that you are as an adult who you were as a child. It is a bit terrifying to see those traits still in play 50 years later! I loved seeing Robin Noscoe’s house, too, and look forward to seeing more photos when you dig them up.

Well done Ben to put so much of yourself out there. That takes courage . I thoroughly enjoyed this blog for the delightful memory . I still make up my own world . Big hug

Very much looking forward to posts from Bridie.

Old school reports are so fascinating, aren’t they? I recently found one of mine from preschool, in which the teacher wrote that I adored animals. I very much do to this day (despite being allergic to every single one, cruelly). It was fascinating to read that my personality or personhood was probably already formed by age 4. Makes a strong case for nature over nurture…

A Google search reveals that Robin Noscoe’s home appears to be featured in the August 2003 WoI. Do post pictures some time!

Have been trying to sit down and read this post for a few days. Cup of tea, chocolate brownie by my side, I really enjoyed that trip down memory lane with you, fabulous. Nothing stays the same…progress…ahem, well I think we all have examples of that! Great post, thank you.

………….and a jolly good entertaining evening it was at John Soane Museum, thank you Ben
Stanley

how sweet! had to laugh, i’m taking a writing class at the moment and am getting similar style over substance commentaries!

for some of us, the visual world is quite enough!

lucky you! john soane’s museum – teachers would be proud!

dear ben…
this was such a delight to read this morning with my coffee.
thank god your memories are so rich and intact and safe from the idiots of demolition and ‘improvement.’
what a loss. garden house. as beautifully individual as the man himself. a treasure.
thank you for this trip back.
it was lovely. in every way.

Looking forward to hearing from Bridie and 2 posts a week- you are spoiling us!