I’ll admit, I woke up this morning feeling rather healthier than last Sunday.

That’s the difference between having the decoration office, and Mum & Dad, to stay at the Parsonage for a weekend. We had the quietest time imaginable but that’s not altogether a bad thing. In fact, it was a very good thing. I think this was a weekend all about ‘rest’. It’s all very well working; it’s all very well playing. But I guess what I probably needed right now is… something in between. 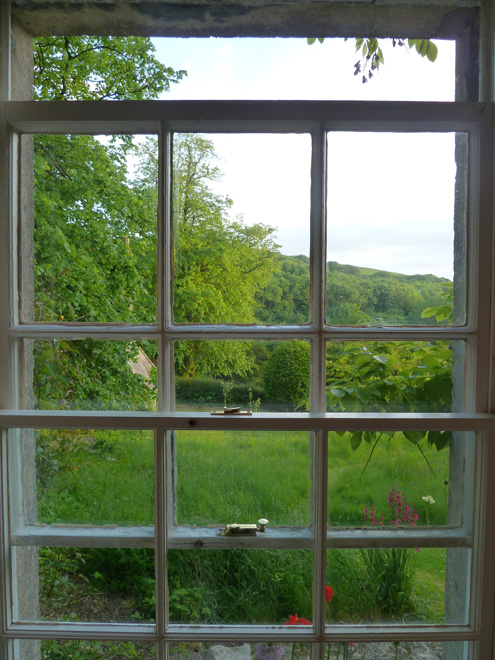 It really was a mad week – I can’t believe how time is flying right now. On Monday and Tuesday Rob, from the office, and I went up to our project at Cholmondeley. We’re designing a new Estate Village for the ancient castle there. It’s a wonderful, albeit rather eccentric, job to be working on. We were meeting locals for a two-day consultation on the scheme as designed so far. A talkative two days, and it was a tired pair of people who got back on the train at Crewe on Tuesday afternoon. We couldn’t speak another word.

So it was good to collect my parents from Dorchester station on Friday afternoon and get home in time for a cup of tea and a beautiful soft sunny Dorset evening, and to switch off. The valley is amazingly green. I think I say this every year. But it really is.

We had a weekend of doing nothing at all. Apart from a bit of gardening. Despite the fact that Mum and Dad both should spend a lot more time resting, they are both extremely unhappy unless given a task. And if they’re coming to stay for two days, you really need to save up tasks.

It’s been like this for years. Here they are working on the lawn, back in 2009: 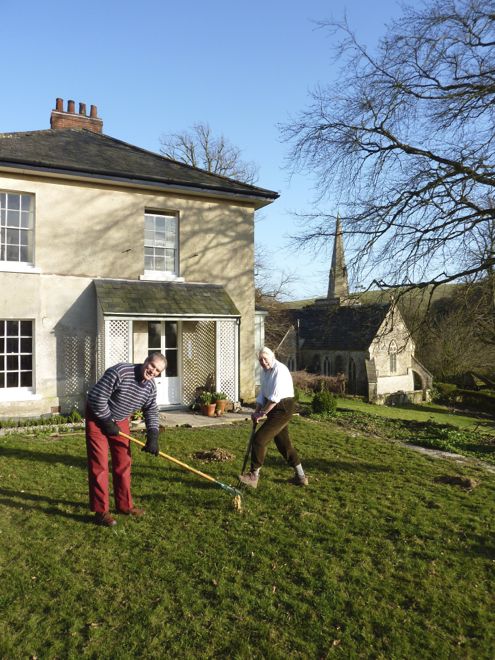 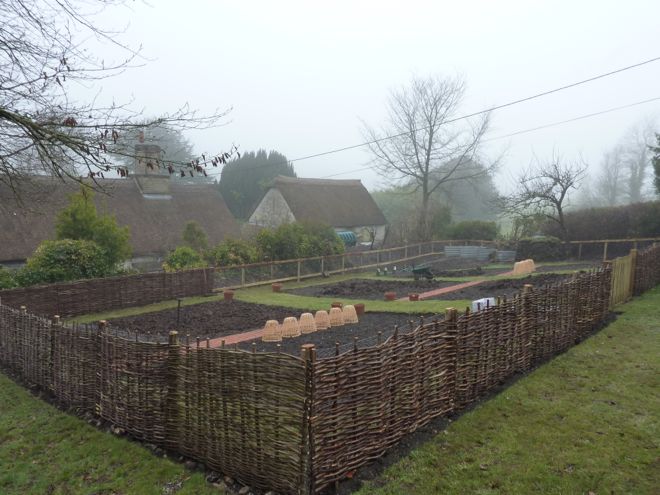 Isn’t that crazy? So new, so much promise. Who knew what the veg patch would turn into five years later?

And yesterday, if you’d wandered down to the garden, you’d have found mum and me hard at work weeding. 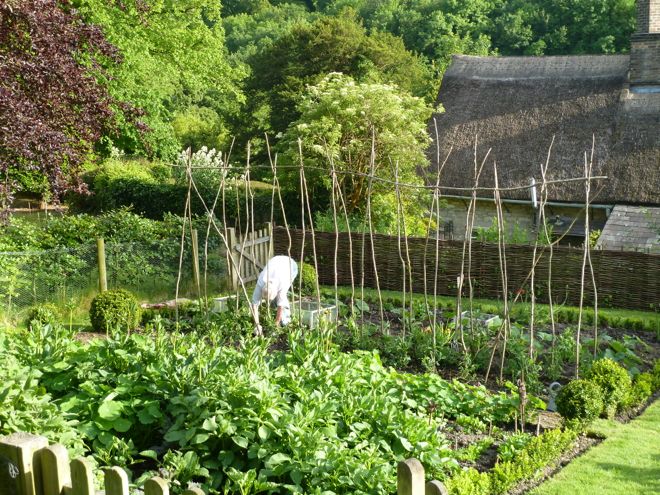 Dad was taking a slightly more relaxed view of things: 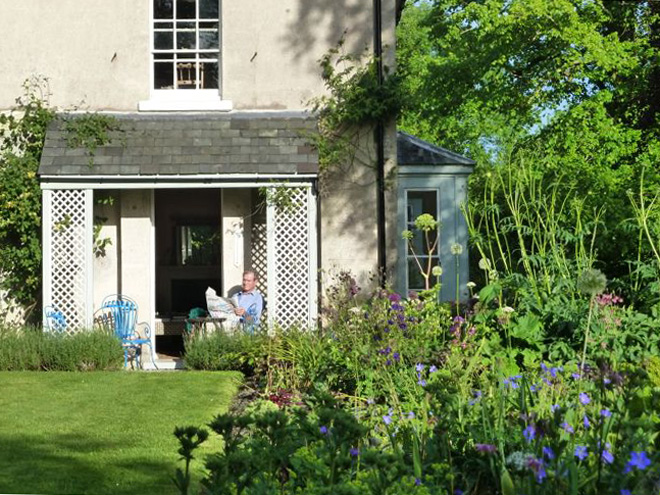 And when I was looking back at a few old photographs of the garden, I found these from a couple of summers ago: 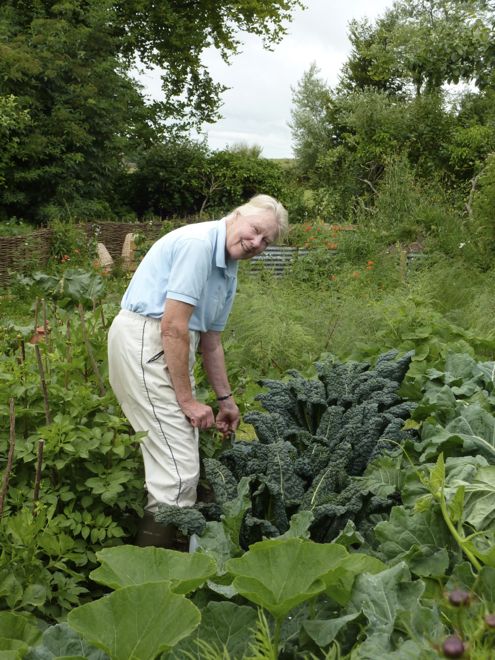 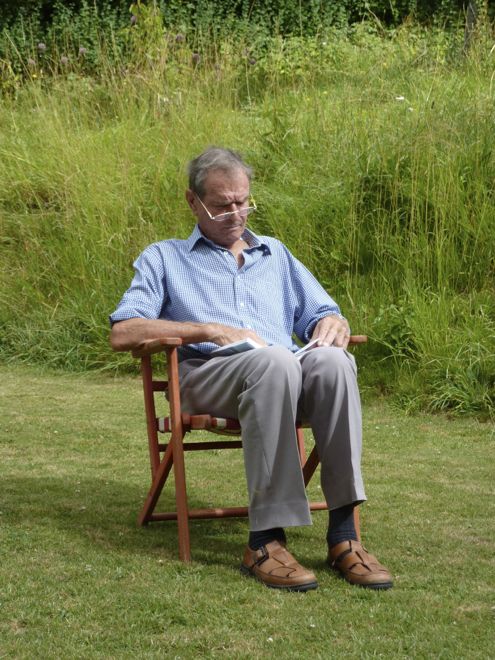 Do you detect a pattern? Well, in fact, that’s a little unfair. Dad moved all my heavy cast iron cloches from one corner of the garden to the other, despite my protestation that it was not a good idea (it wasn’t a good idea, but he wouldn’t take no for an answer. Something else I have to factor in when Dad comes to stay).

Well, we had a very quiet time and a great catch up. And the garden was under control as well, which at this time of year is a slightly restful feeling all of its own. 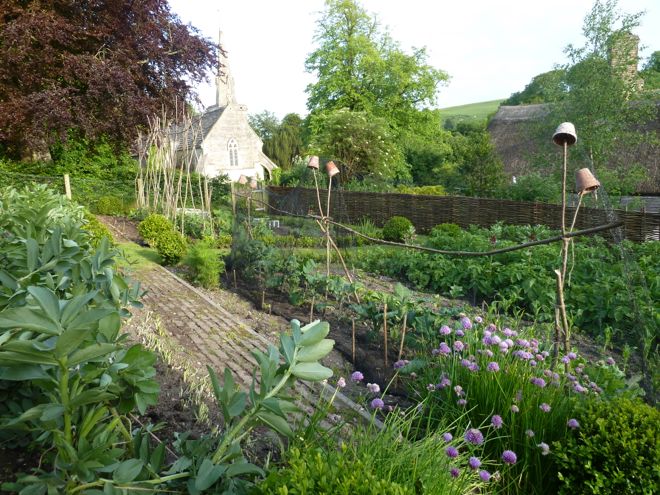 My cabbages, for instance, are even netted (after last year’s caterpillar fiasco). 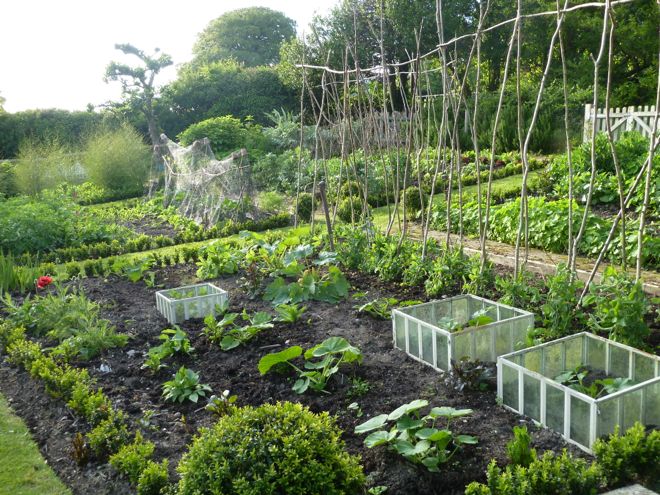 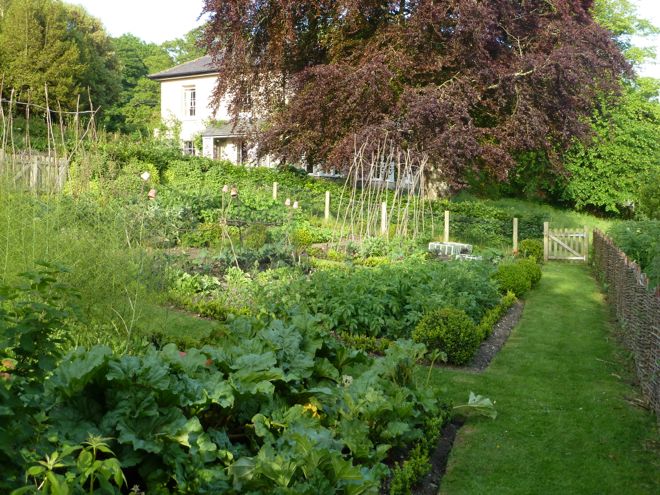 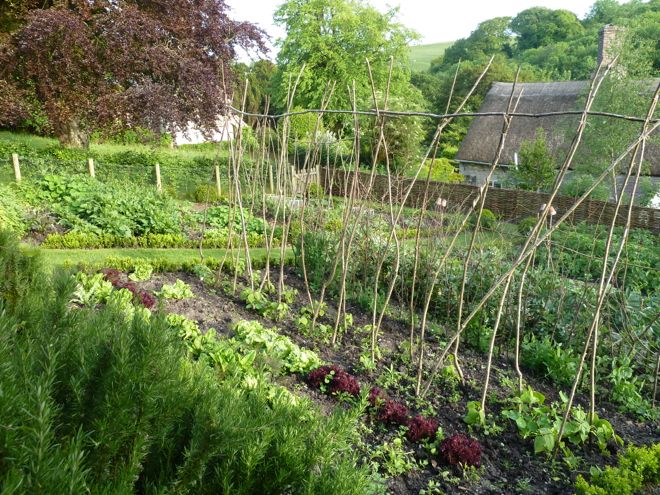 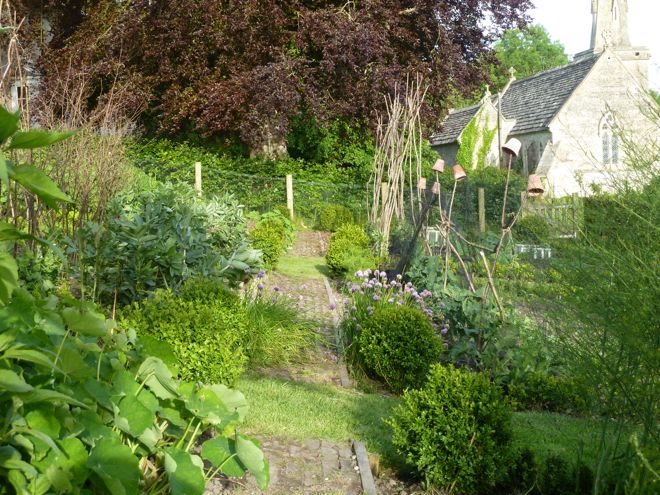 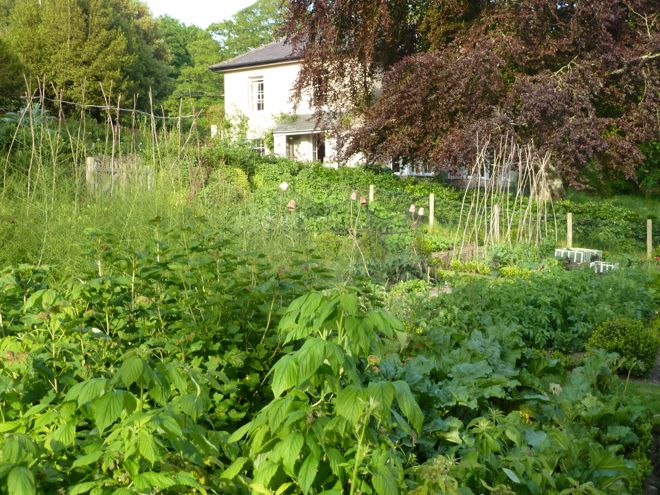 Everything is looking insanely green. 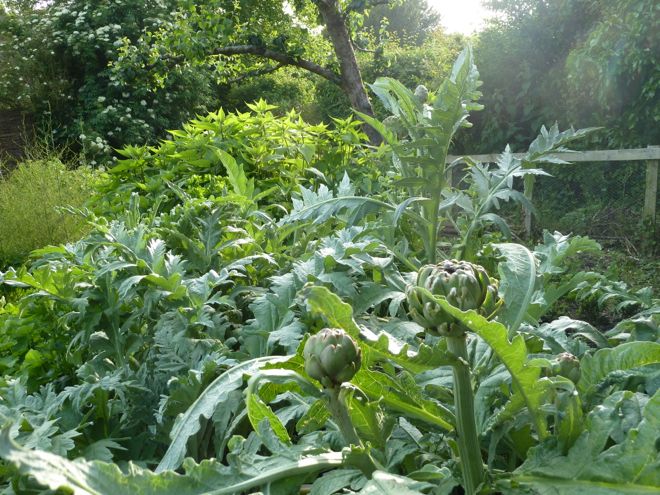 Globe artichokes were for dinner. 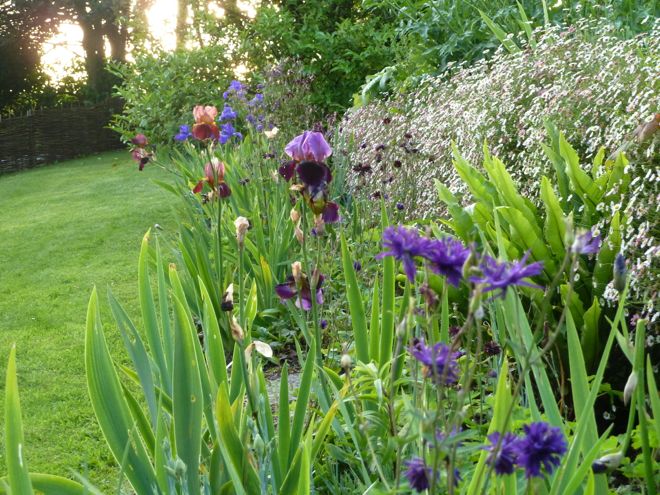 The irises are having a strange year – some on, some off. And by and large, it appears that the only plants in my garden which got the ‘let’s flower this year’ memo are purple ones. It’s rather strange, although just about holds itself together.  I think the borders need some slightly more aggressive work this autumn to knock them into shape.

So, this morning, we set off on a little visit to the Isle of Purbeck. It was a long time ago that I was asked to help design the new wings on the zaniest building I’ve ever seen in my life – the Manor House, in Studland, a rambling 19th century house, once the holiday home of the Bankes Family of Kingston Lacy, which for years had been a rather tired, rather run down hotel – then taken over by my client Robin Hutson, from over at the Pig in the Forest. The before and after shots will be crazy. Today was their opening – and the first guests arrive on Wednesday. 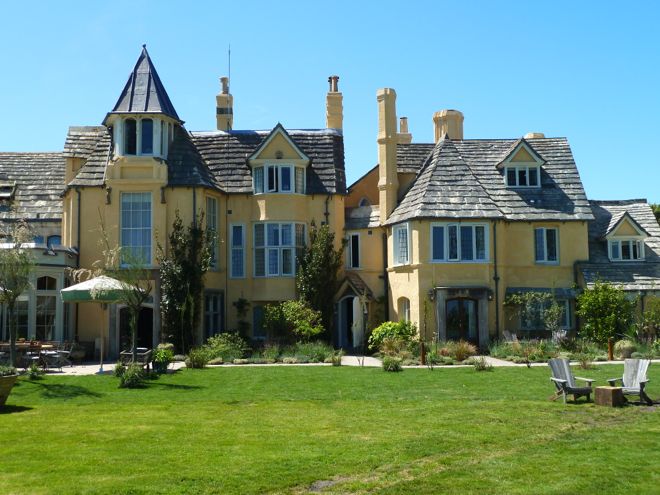 Do you see what I mean by bonkers?!? It’s mad. But definitely quirky. I love the ancient Purbeck slate roof. 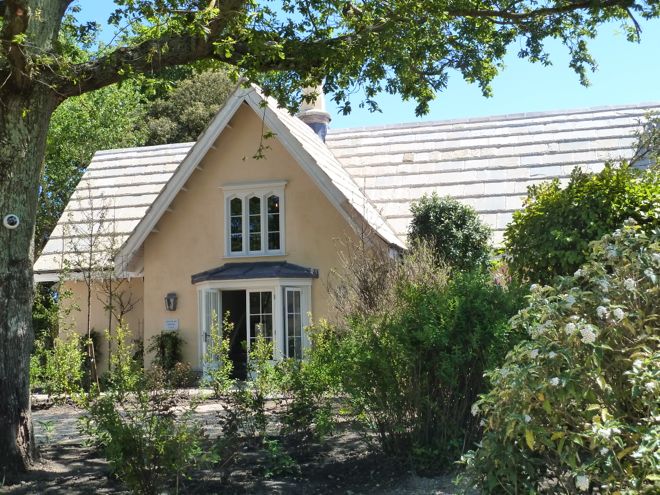 Here is part of our new wing. Um, still being painted. 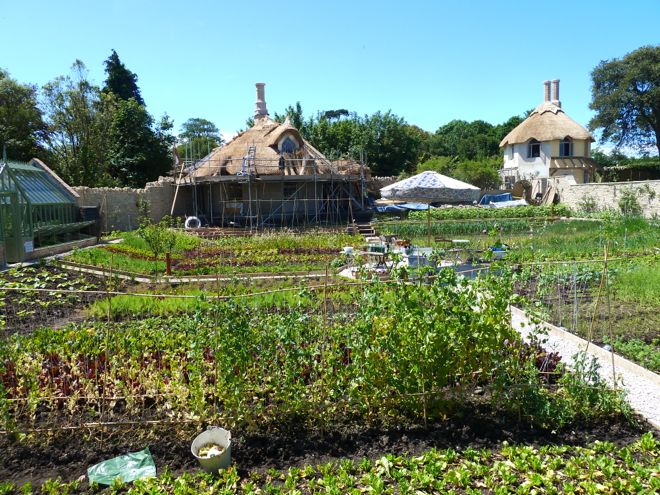 My favourite of all are the two little pepper pots in the walled garden. Still being thatched, as you can see. The garden is stunning. The vegetables go straight to the kitchen.

Meanwhile, the new gothick orangery is beautiful, with its purple and yellow restoration glass in the windows… Robin and Judy Hutson have cast their magic across the interiors. The place was virtually booked out within 36 hours – Robin had a wry happy smile on his face this morning when he told me that. Deserved. 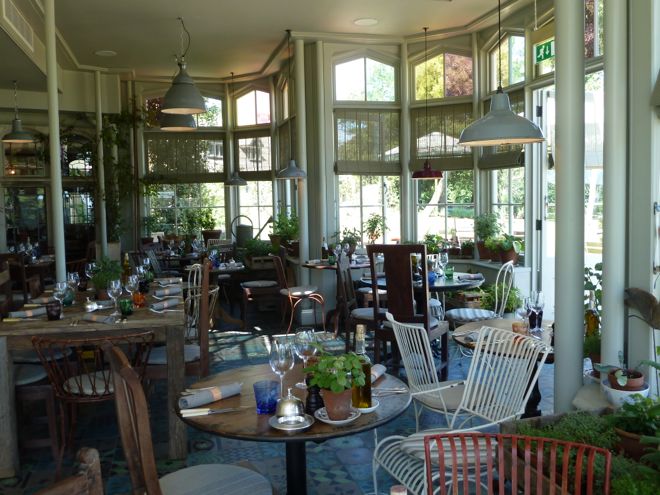 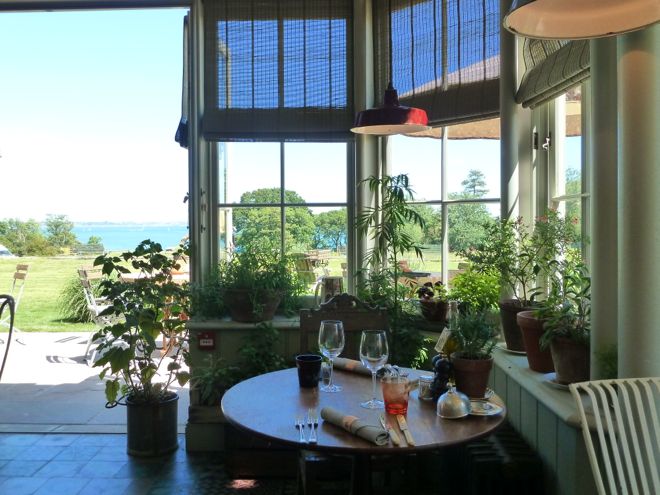 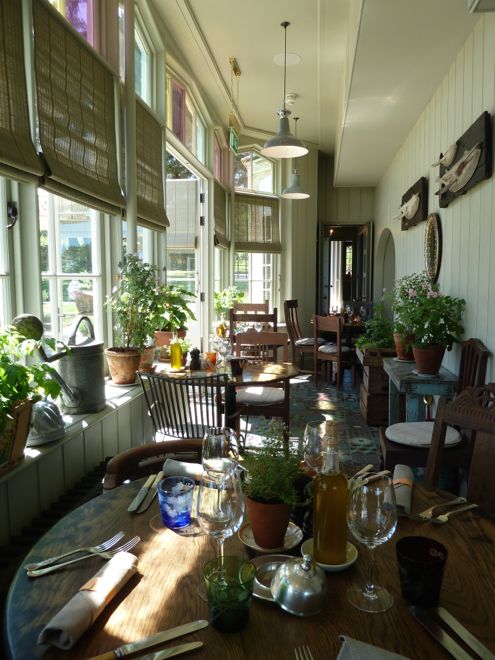 The first glimpse of the pepperpot pavilion from the lane leading down to the hotel.  Cute, quite literally.  And then we were on our way. Preparations were a little manic, and it was time to leave. 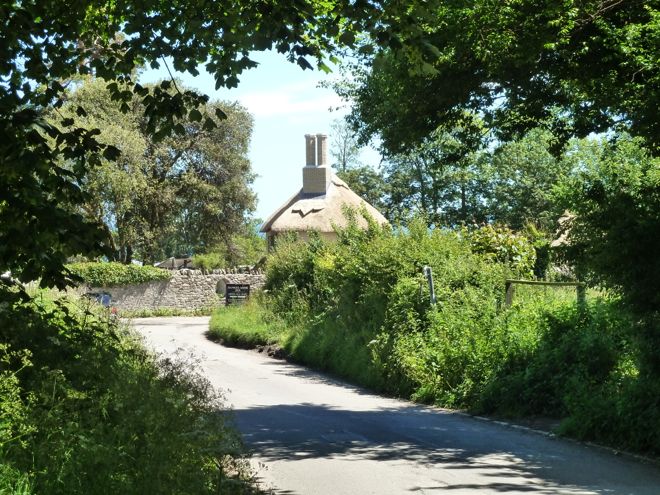 I dropped Mum and Dad back at the Isle of Wight Ferry to go home, and got back to London, and napped. What a beautiful afternoon it has been here.

So, really, it’s all been about three vegetable gardens this weekend. Here’s my tiny garden on the roof in London. I think just now it might be my favourite of all. 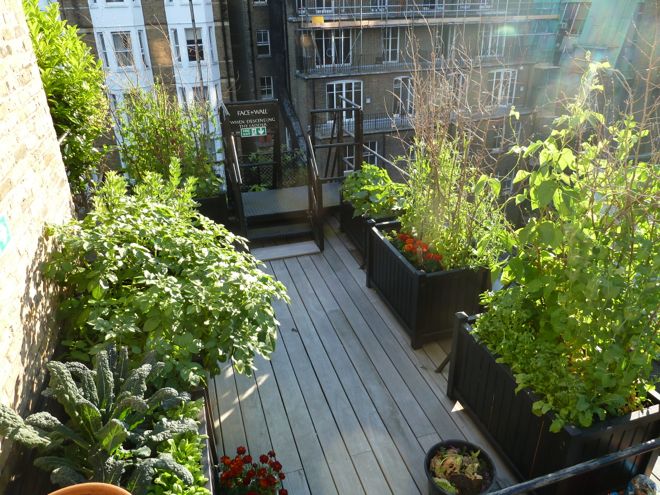 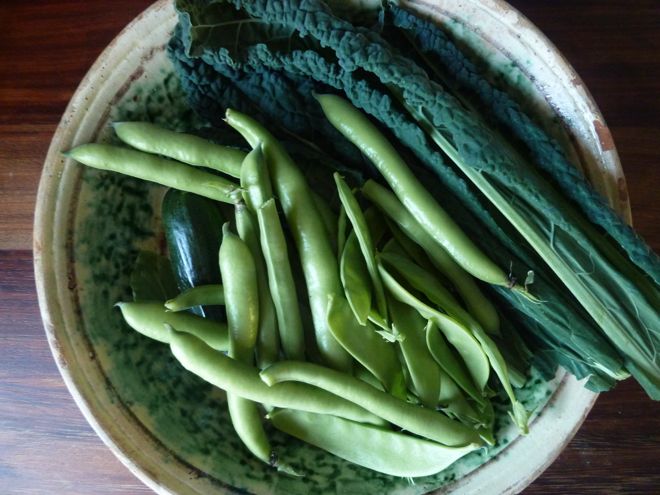 It’s a bit crazy, and these are definitely the most expensive broad beans in history. But I’m very happy they are there. Almost as happy, in fact, as I am that we hadn’t had a crazy dinner party last night, and a huge crazy fun weekend, but went to bed at 10pm. What a difference a week makes.  I hope you’re feeling rested too.

If your irises are not flowering well it is probable that they have grown overcrowded and need lifting and dividing. I knew last year that my own irises were in desperate need of dividing or they would not flower, but did not get around to it. Lo and behold, very few flowers this year…

I saw Ann’s comment referencing Beverley Nichols, which reminded me that I had seen an old copy of his Down the Garden Path a mere two days ago when I was trawling for gardening literature in the local used booksellers. I did not pursue it, having fallen truly, madly and deeply for an old paperback of William Cobbett’s The English Gardener and a useful-looking Gertrude Jekyll On Gardening.

Taking Ann’s comment as a sign, I trotted back to the bookseller today and am now the delighted owner of Down the Garden Path which – joy of joys – turned out to be a first edition (alas, priced accordingly, but you can’t have everything)!

Blue, I am fifty years abroad in two countries, triple citizenship, and yes, I am also home each time I read this.

You can pull a load of veg out of an urban garden, I am finding, enough spinach and rocket for lunches and dinners every day, and PLENTY left over for friends. I expect my basil and parsley to provide just as eye-popping a bounty when the weather turns in their favor.

I must be just the latest in very long line of readers who delight in your posts. Thank you – they transport me. Never stop.

Oops, my prior comment was published before I even finished my sentence.

Here’s the rest of it:

The garden looks splendid and your rooftop bounty proves that one need not have a large space to grow something edible. Well done!

Your parents remind me so much of my own. They always find something to do to help around the house or garden when they are supposed to be visiting me for a break.

The garden looks splendid and your rooftop bounty

Trying hard (and not quite succeeding) to imagine you “unable to say another word”! x

Reading this on a beautiful, breezy, green morning in Vancouver, this is the best time of year isn’t it.? Your parents remind me of mine. My stepdad is always beavering around in the garden or his workshop and no day is complete without a read of the paper, you know one of those big unwieldy ones, and a gin and tonic.

And small world that it is, just last week I was reading about the latest Pig and saying to myself “that would be a great place to visit with M + P next time I’m in England”.

BTW Blue loved your comment. So true about missing the dottyness. I try and practice it everyday.

Love your work on Purbeck- what’s the name of the hotel?

Could you tell us the name and make of the amazing blue paint on your metal chairs, it’s a ravishing colour!

Oh, Ben, if you posted nothing but the pictures of your vegetable garden at the parsonage, I would be happy as a clam. I love seeing the change in the plants all season long. Thank you so much for posting. If I were in England, I would be happy to pull weeds in your garden anytime!

I felt refreshed just by looking at these lovely photographs and hearing your stories…….

Hey Ben, thanks as always for sharing – love it all. Lovely parents! Quick question if you get the time; I like your timber planters on your roof terrace and I’m wondering if I can buy them from your shop? Enjoy the week ahead. sbw

Perfect porch for reading the papers in, blue (!!!) garden chairs and a vegetable patch that I would love to lift up and transport to Hampshire.
Heaven.

Such a beautiful vegetable garden :). I guess it isn’t about just rest but also peace, happiness and the feeling of content. There is this breath of freshness and calmness in this post; something that will help me with Monday blues! Thanks sharing; loved it!

Your parents live on the IoW? I’m a corkhead born and bred. Which, I’m sure, accounts for a lot of things.

I think your first photo should be the cover of a novel. Almost Room with a View but not quite. The one EMF didn’t quite write. I wish I felt as Blue does, back at home when reading your blog posts. I feel suspended above it, in a state of sublime longing, which is equal parts pain and pleasure. Prolly all corkheads are masochists at heart.

I raise my G&T to your London planters – inspirational. Who cares if your beans are the most expensive in the universe? At least you know they’ve had a happy life and a good death and can eat easy!

I finally figured it out – you’re Beverly Nichols. 🙂

I look forward to your posts – they are the essence of the slightly dotty and unselfconscious Englishness (and I mean that with all the affection in the world) I miss so much. Thirty-four years abroad in two countries, dual citizenship, and still I’m home each time you write. Oh, dear, I think my Perfect Manhattan is going to my head.