“…….Oh B, I’d really like to see some snowdrops this year” said Charlie, a couple of weekends ago.

I had a quick think, and called my erstwhile builder Raymond Williams, who seven years ago helped me do up the Old Parsonage.  As well as owning a small and very good building firm, Raymond happens to be the latest in the line of an old, old Dorset family who have lived in a beautiful house called Herringston, just south of Dorchester, for many generations.

“Raymond”, I said, “could I introduce you to Charlie and could we come snowdrop peeping?”.  Raymond said they were not yet quite out, but to come in two weeks time. “Come for lunch” he said.  So yesterday, we did. 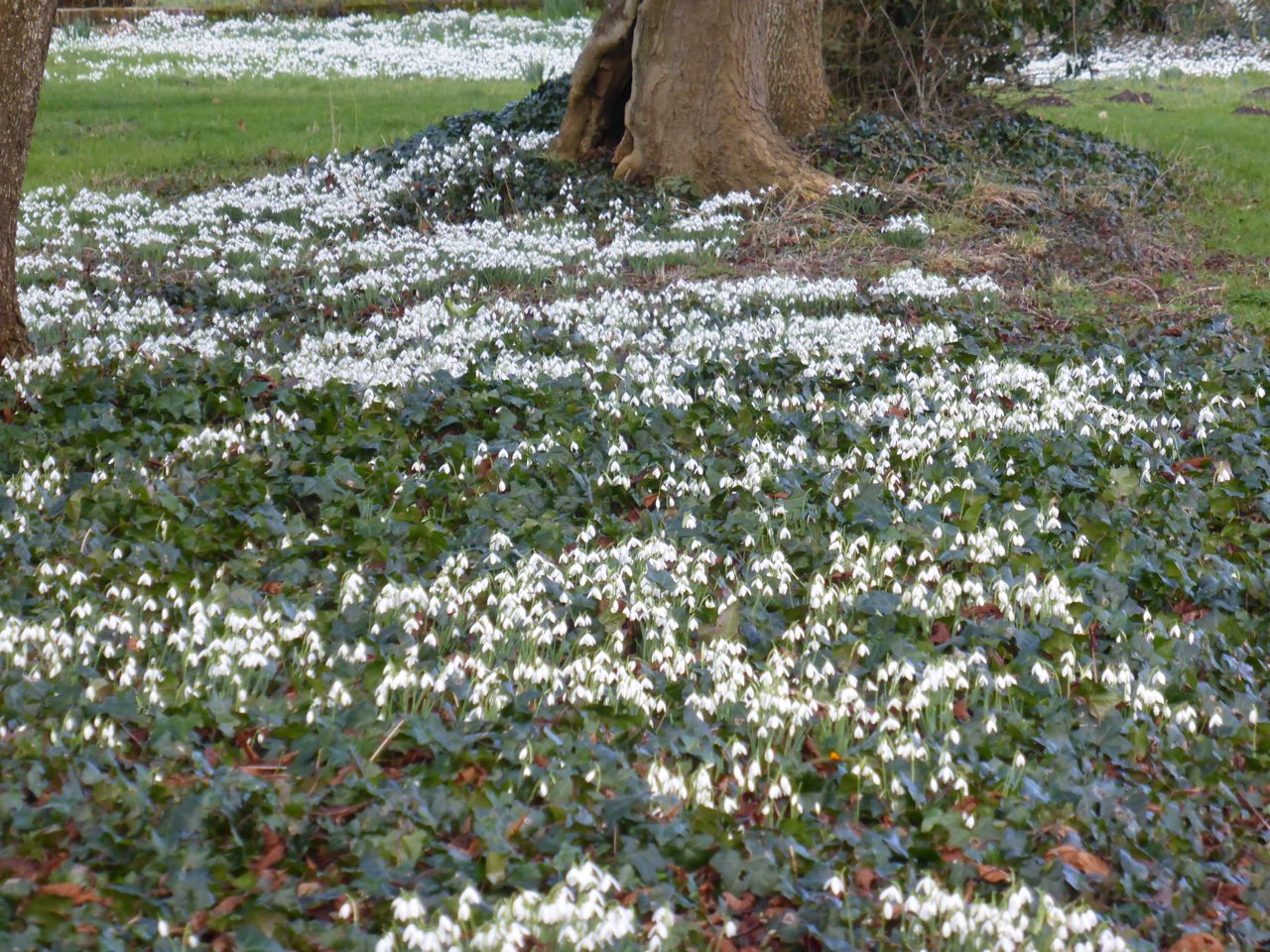 Admittedly, the snowdrops at Herringston are famous. Raymond told us that he has a letter in the house dating from the 18th century, where a new bride of the Williams family is writing back to her parents and describing how, in the first weeks of February, the people of Dorchester would walk out on a fine early spring day to admire the snowdrops down the drive of this ancient Dorset manor house. 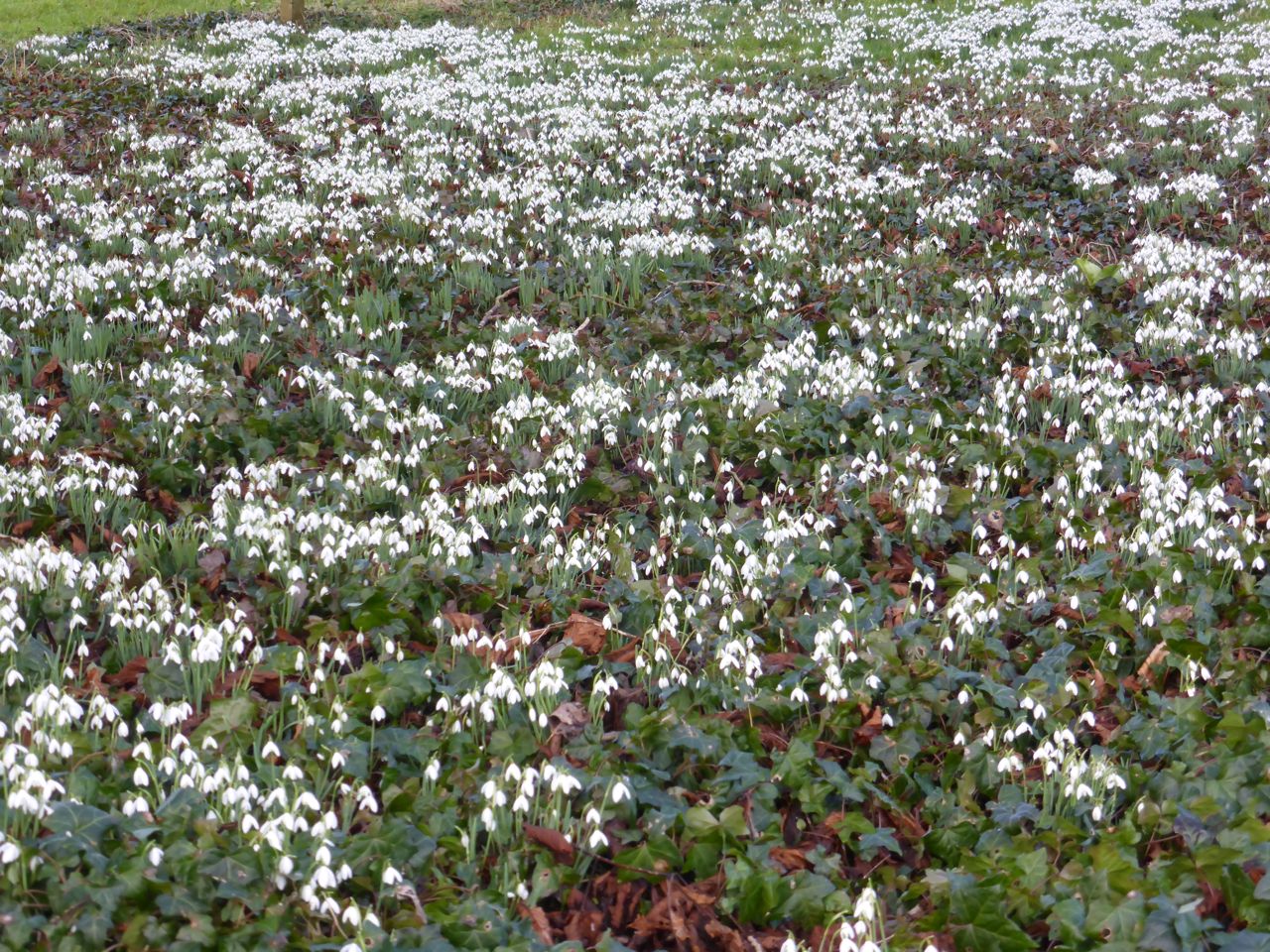 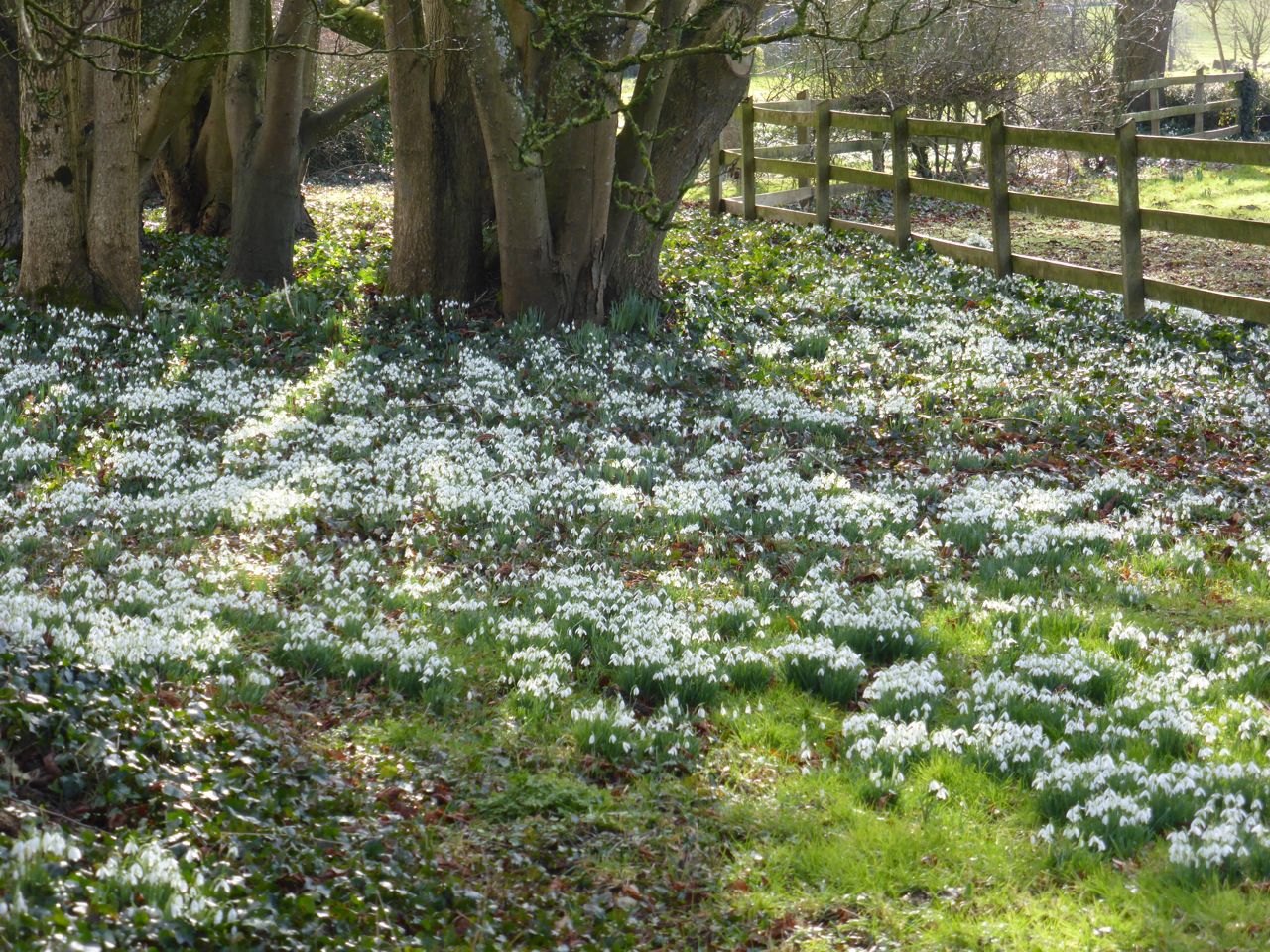 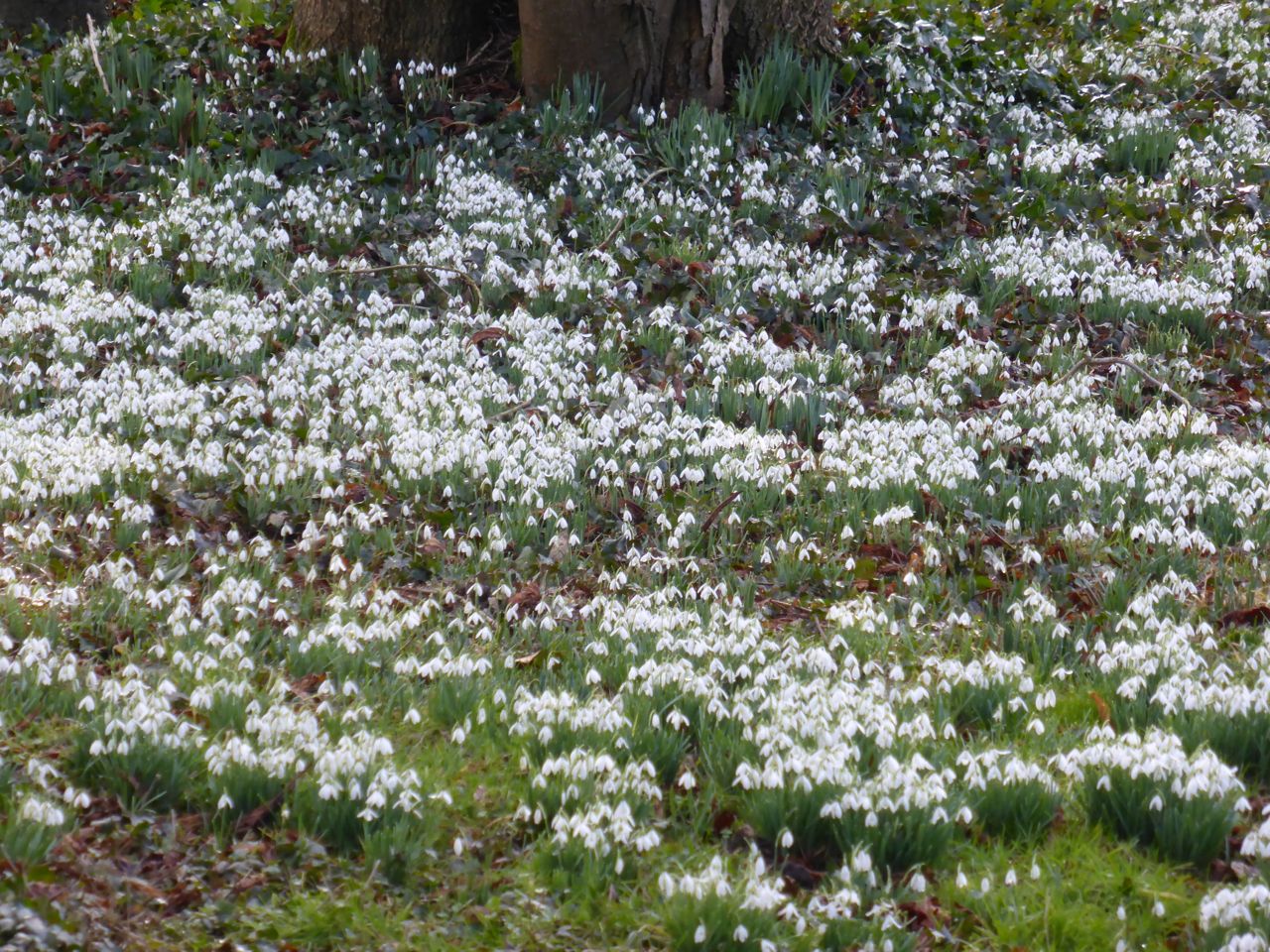 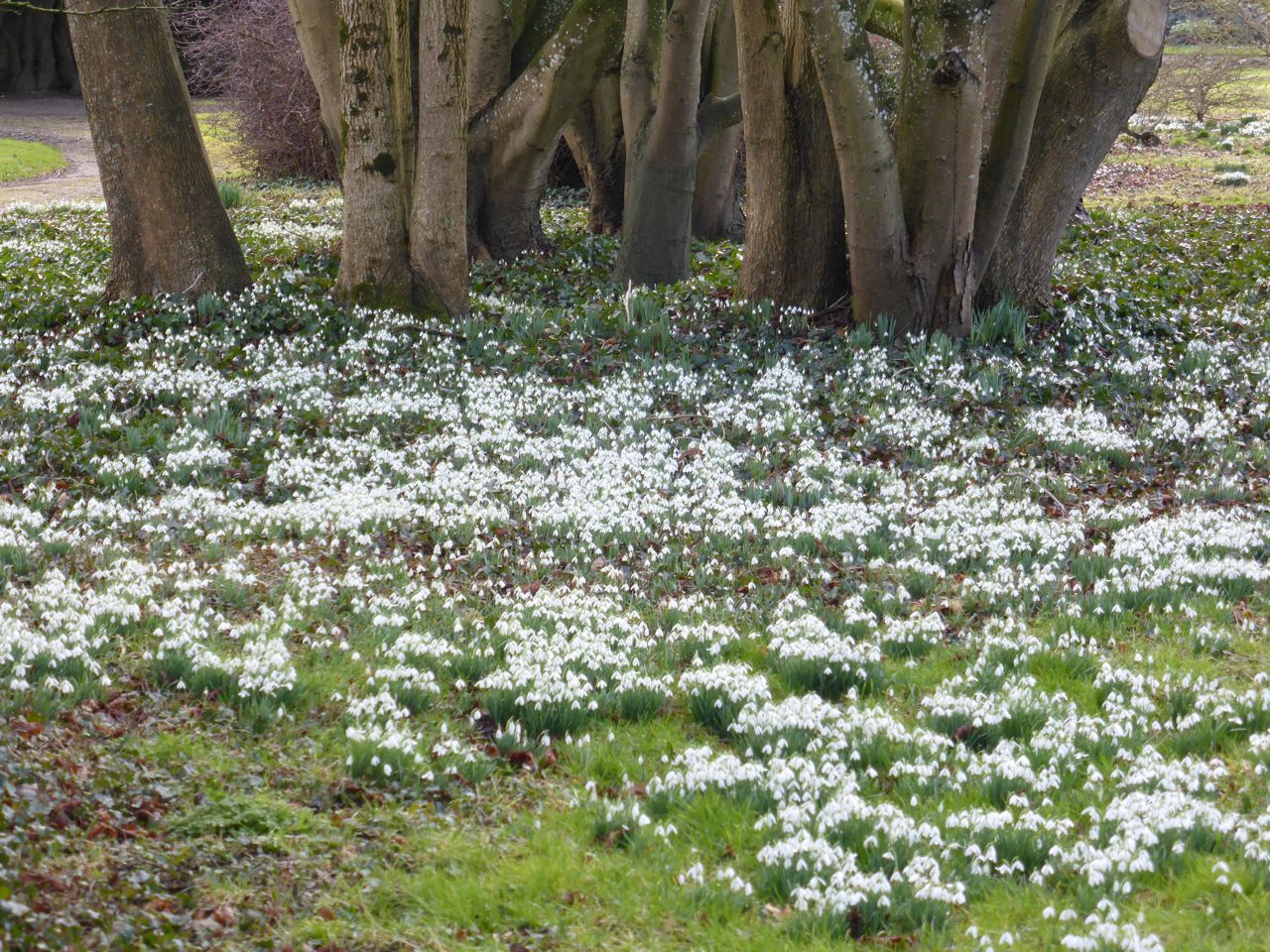 D you see what I mean? 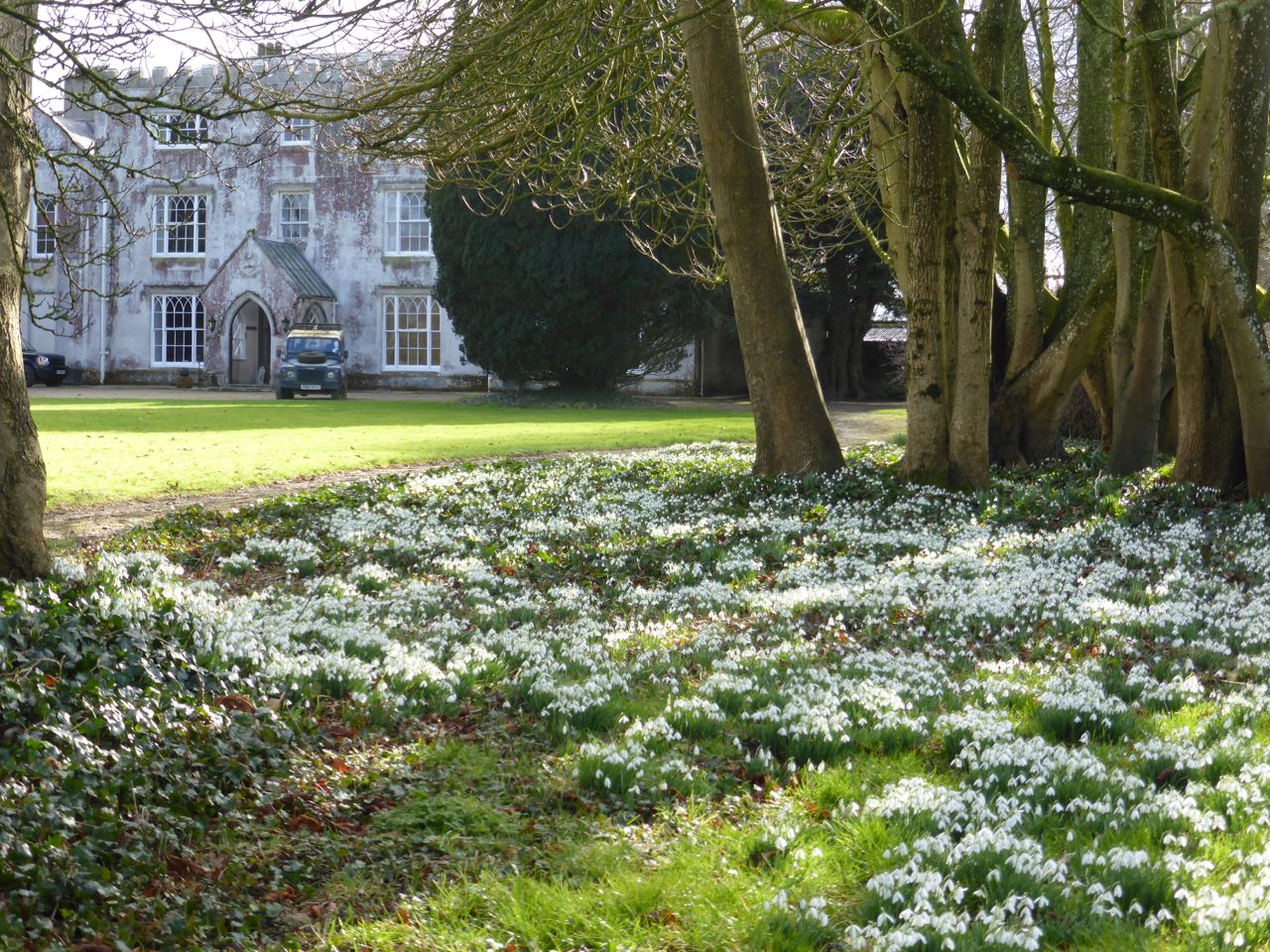 (Can we also talk about how cool the ageing Land-Rover is, outside the aged grey stucco facade of the house?)

But back to the snowdrops, coming alive in the warm February sunshine… 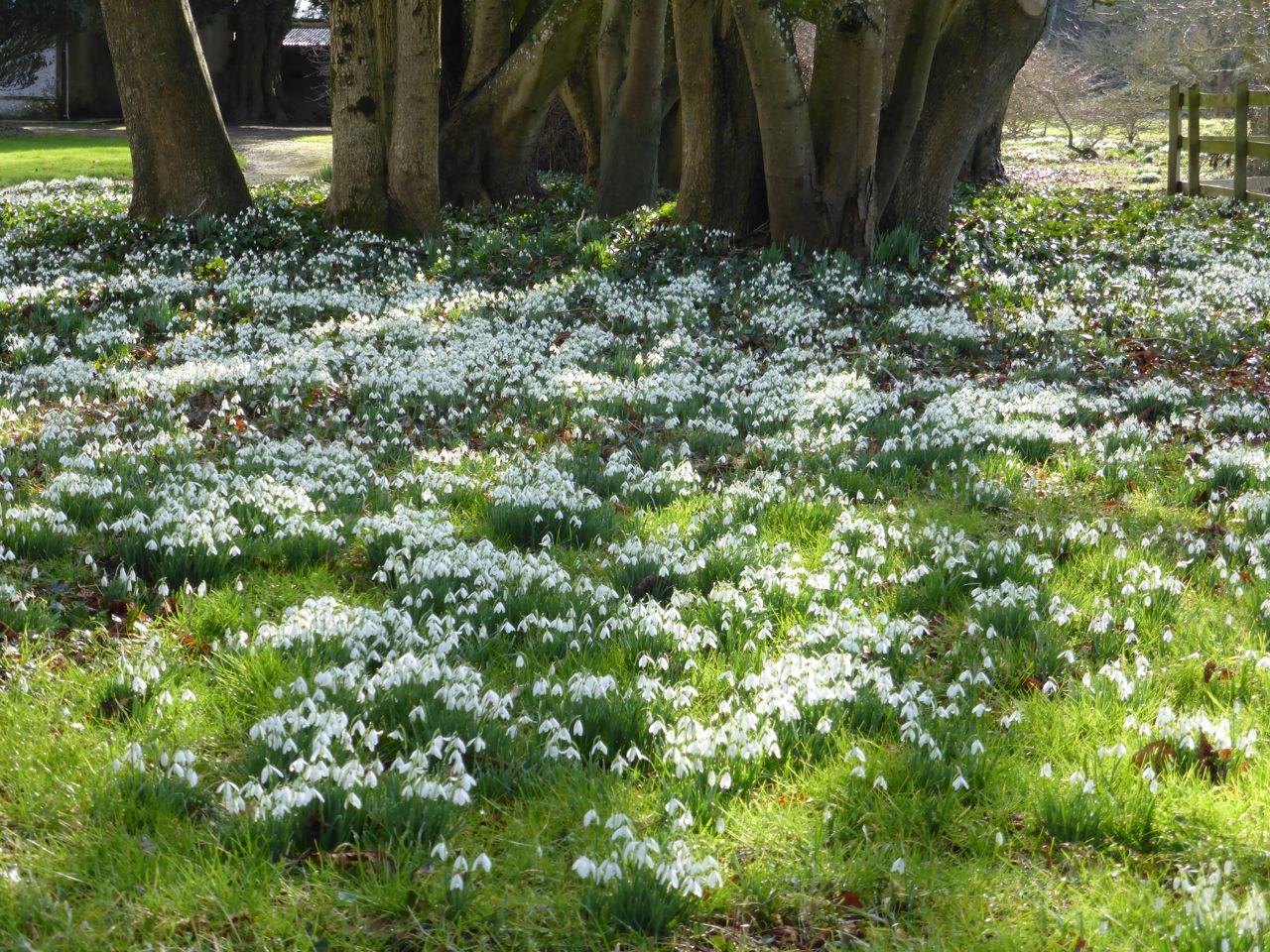 The view is spectacular.

Two years ago, the entire area of the drive itself was flooded for weeks and Raymond and his wife feared the snowdrops had gone for ever.  But thankfully, this year, they have started coming up again. 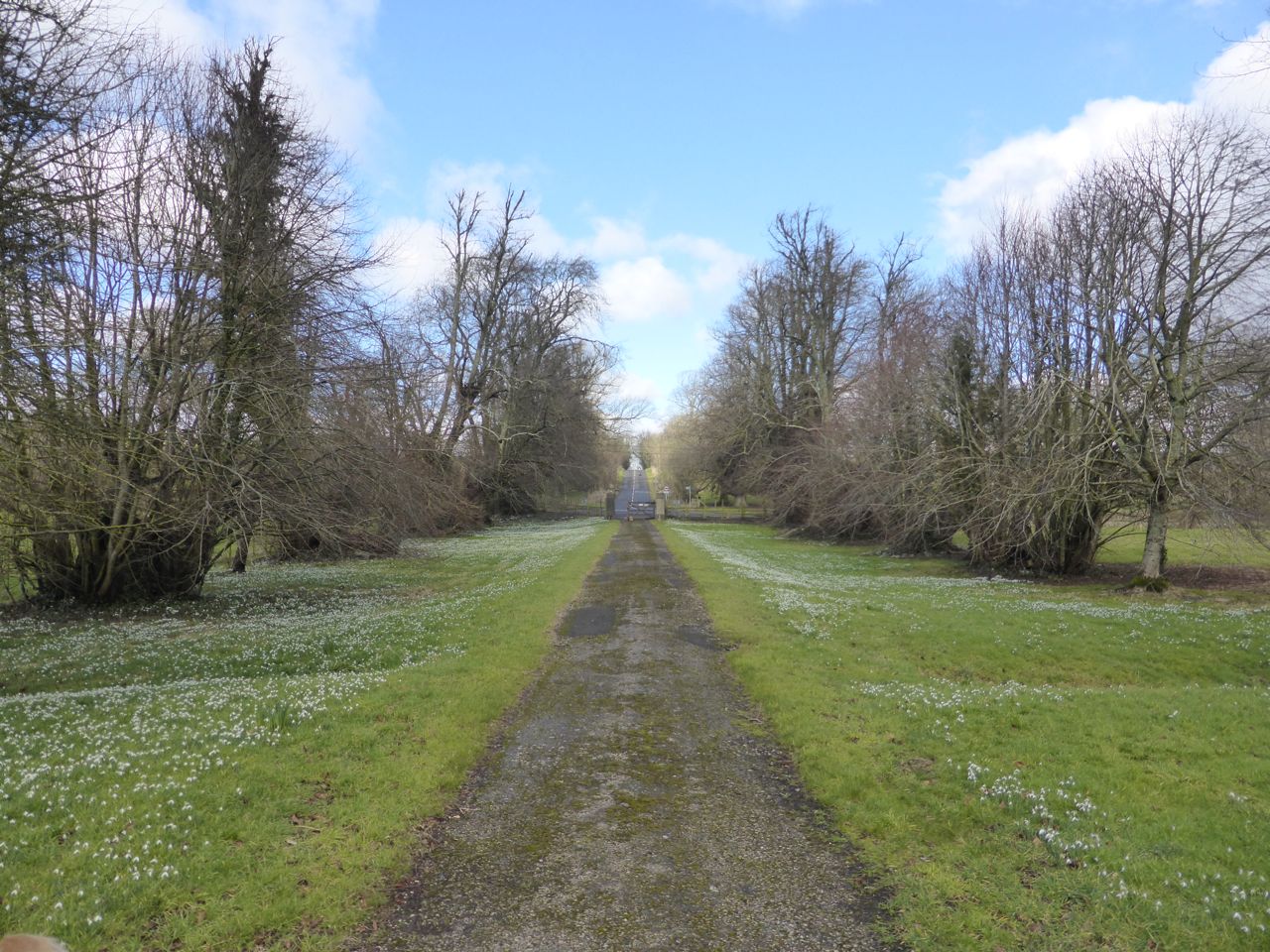 Some other glimpses of their beautiful garden. The remarkable Victorian conservatory: 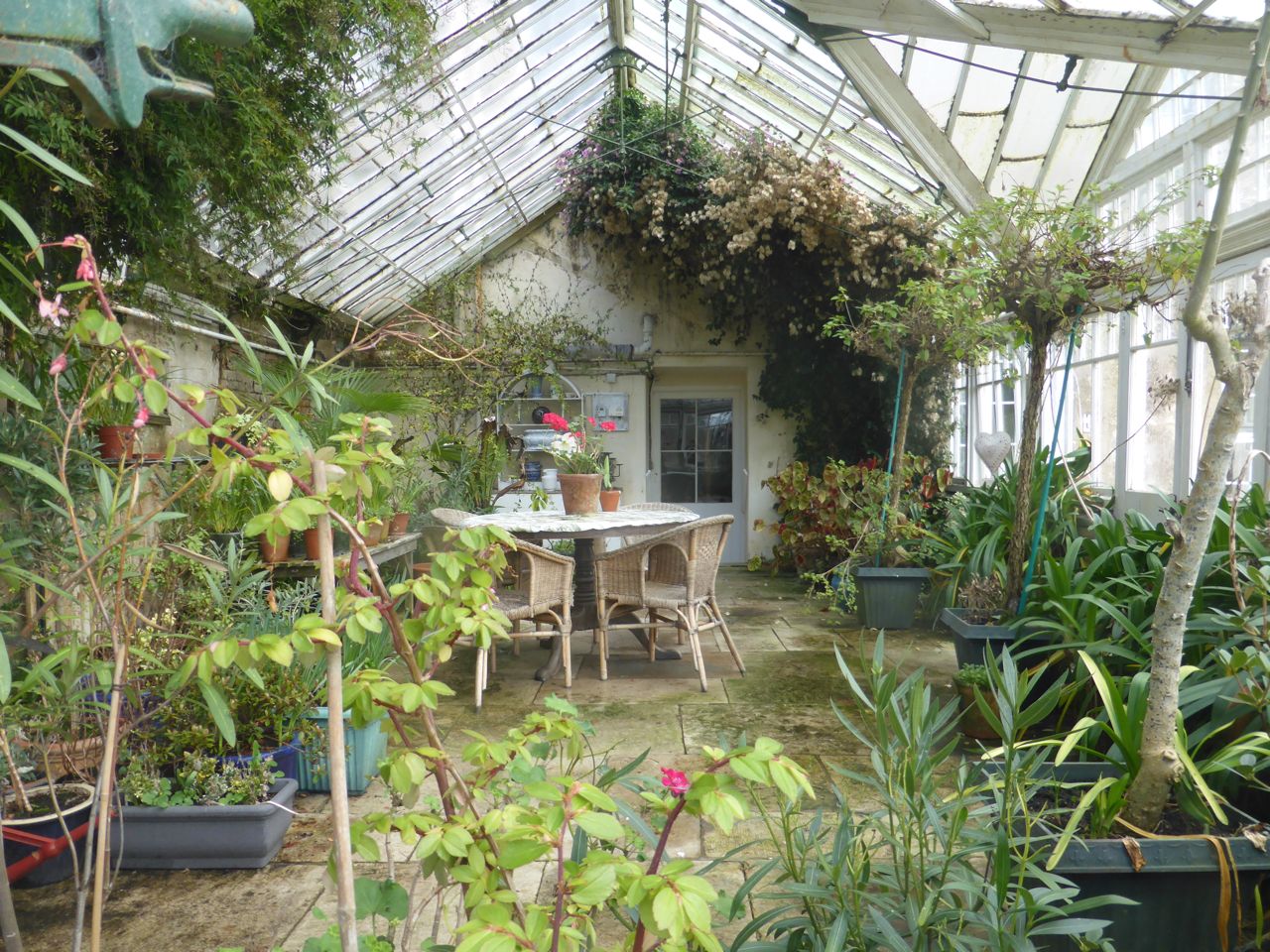 The back of the house has curious glazing bars shaped in a ‘X’, which makes the whole of the garden front look at little as if it is in World War 2, preparing for the Blitz. 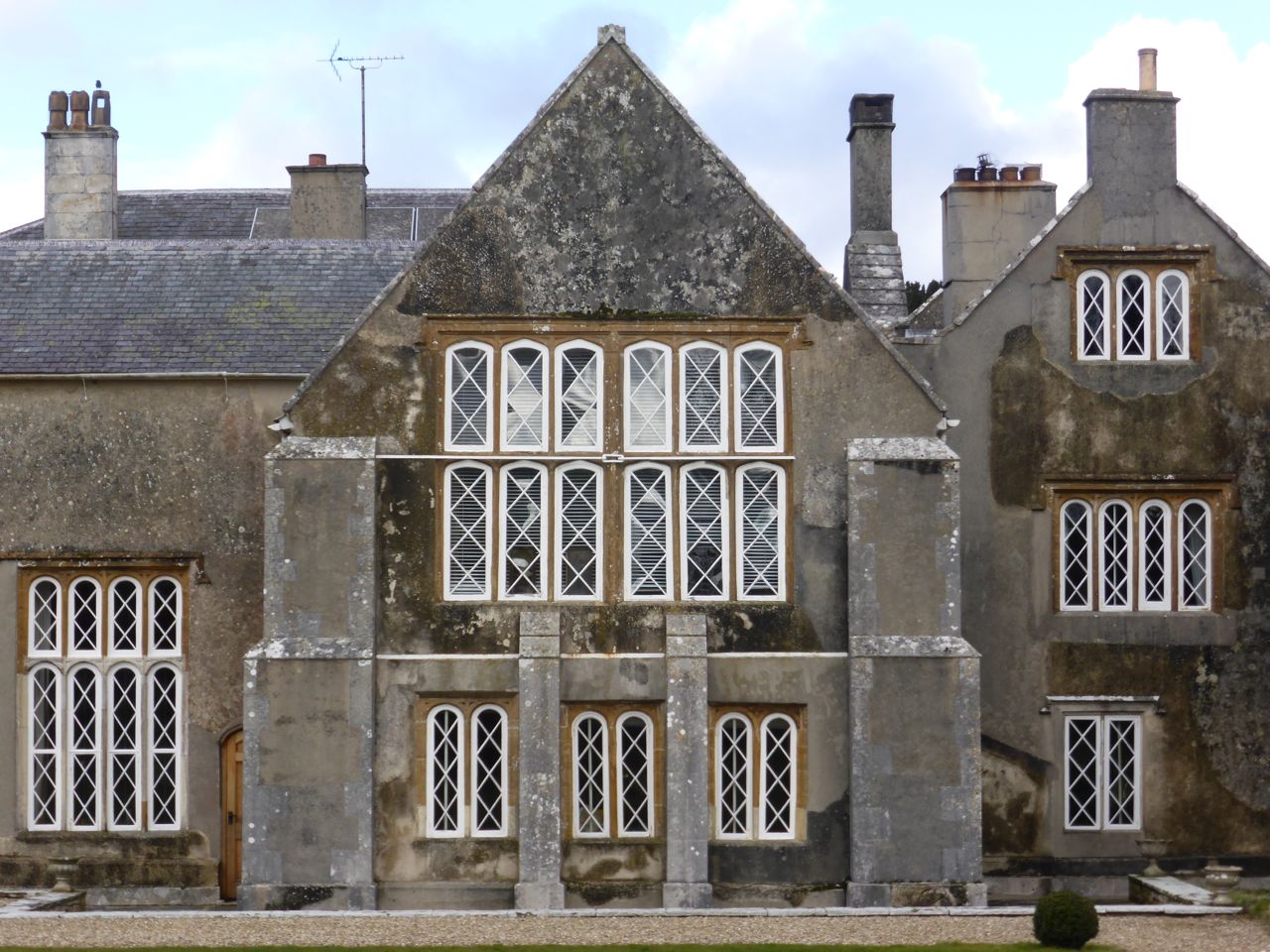 Just to the left are a pair of sash windows that remind me hugely of the Old Parsonage: 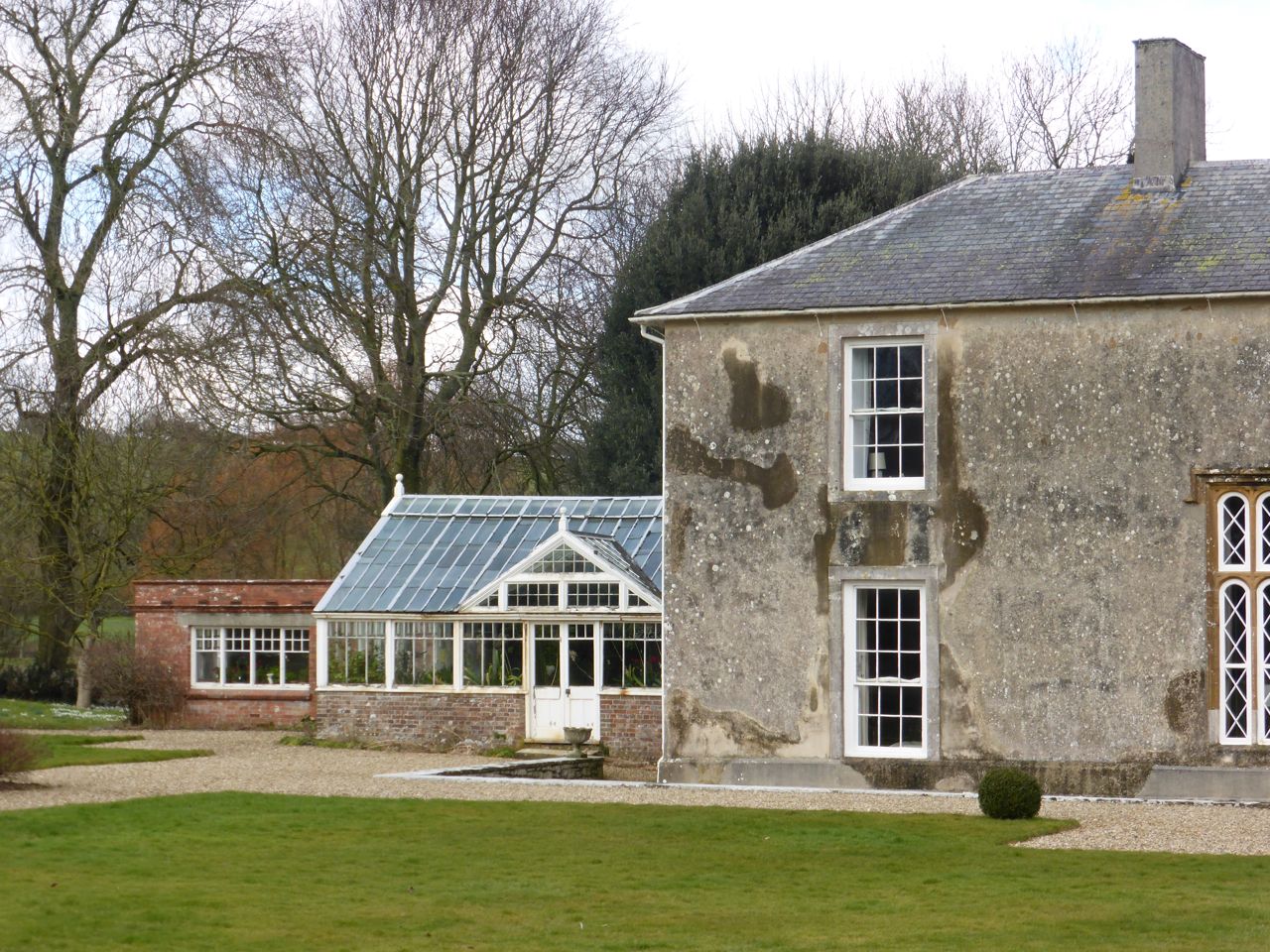 On the other side of the house, a glimpse across the beautiful walled garden: 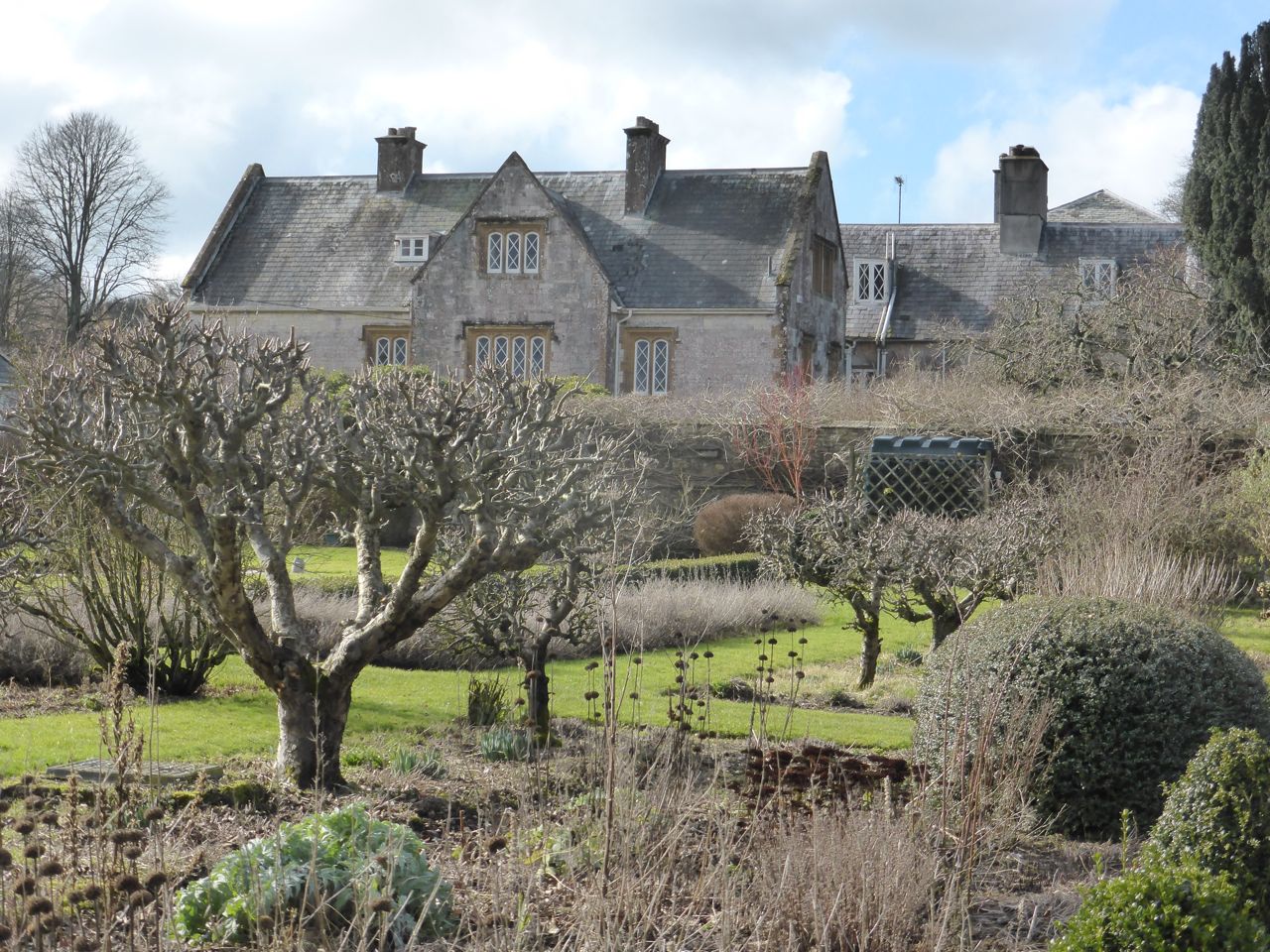 and of the greenhouse, which I love: 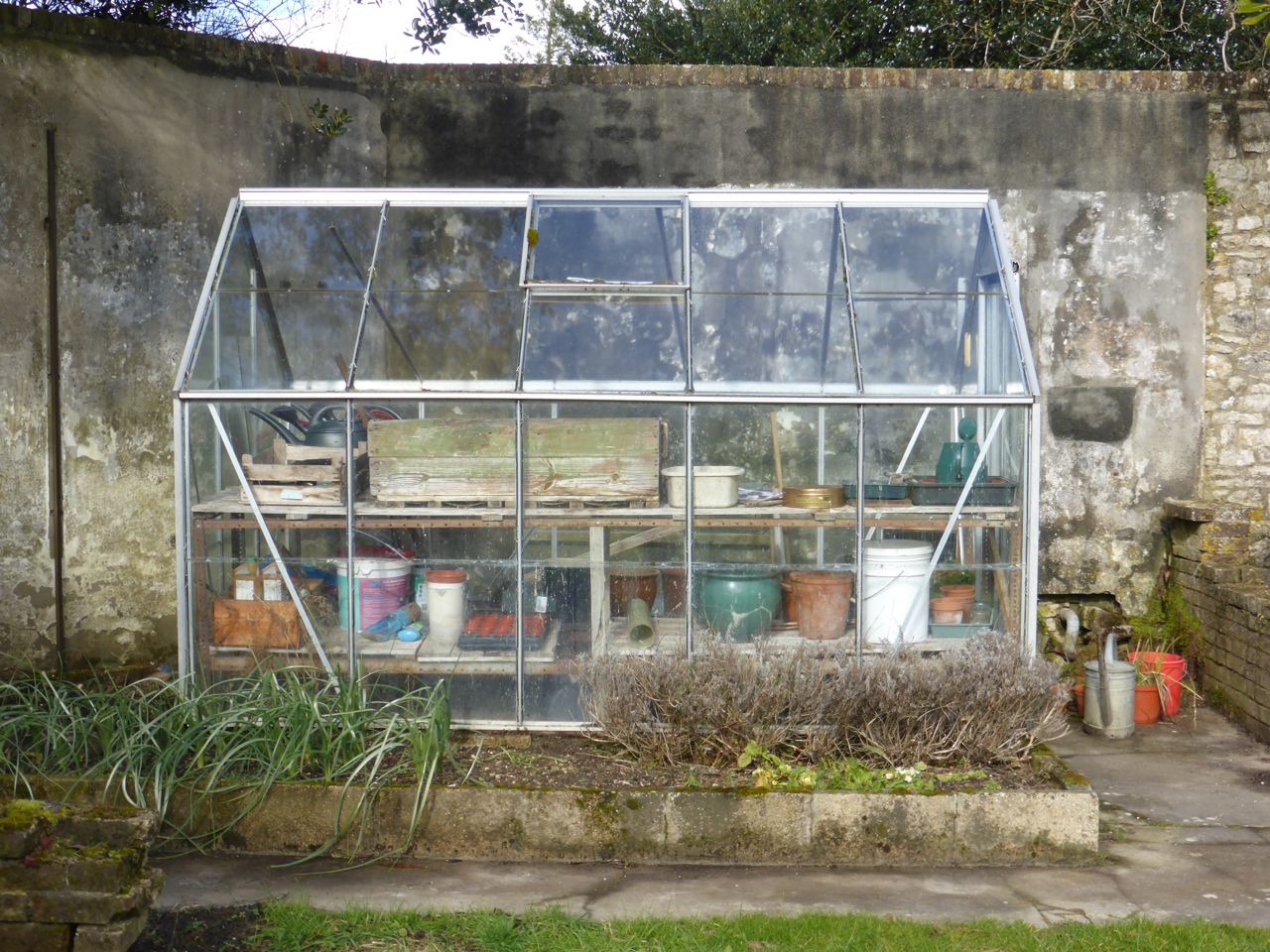 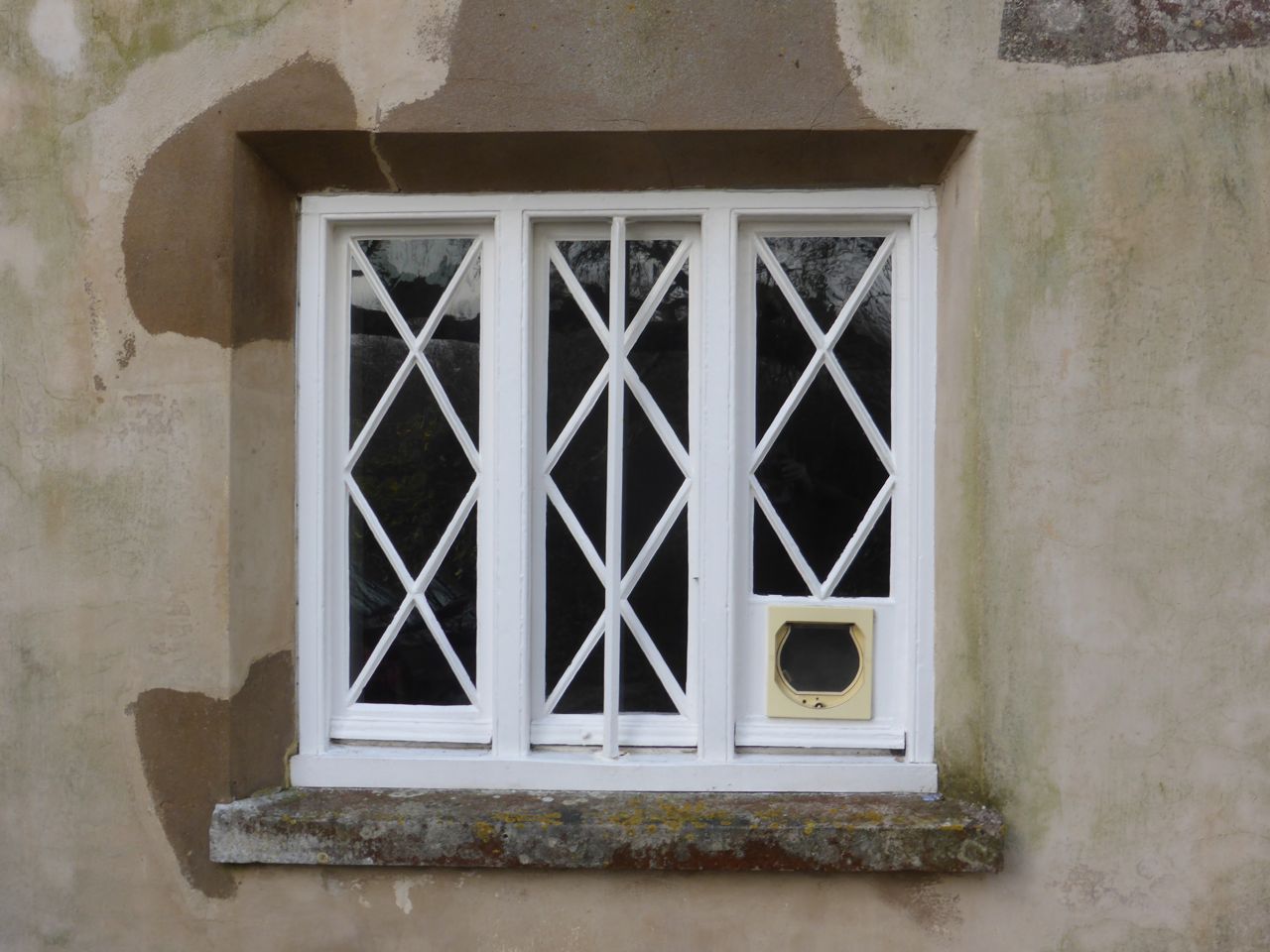 A view through the glazed entrance porch: 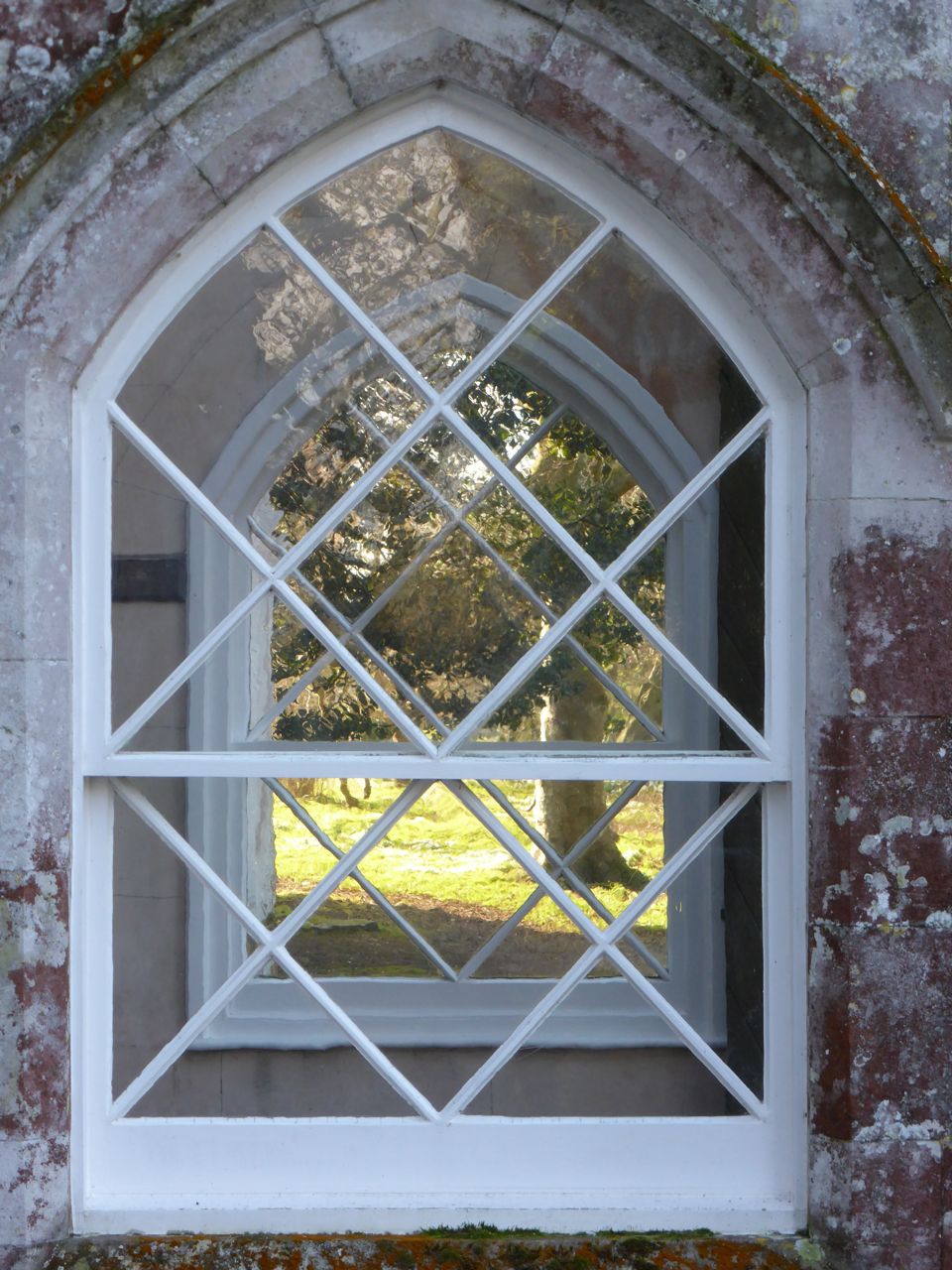 And of the fine late 18th century gothick sash windows: 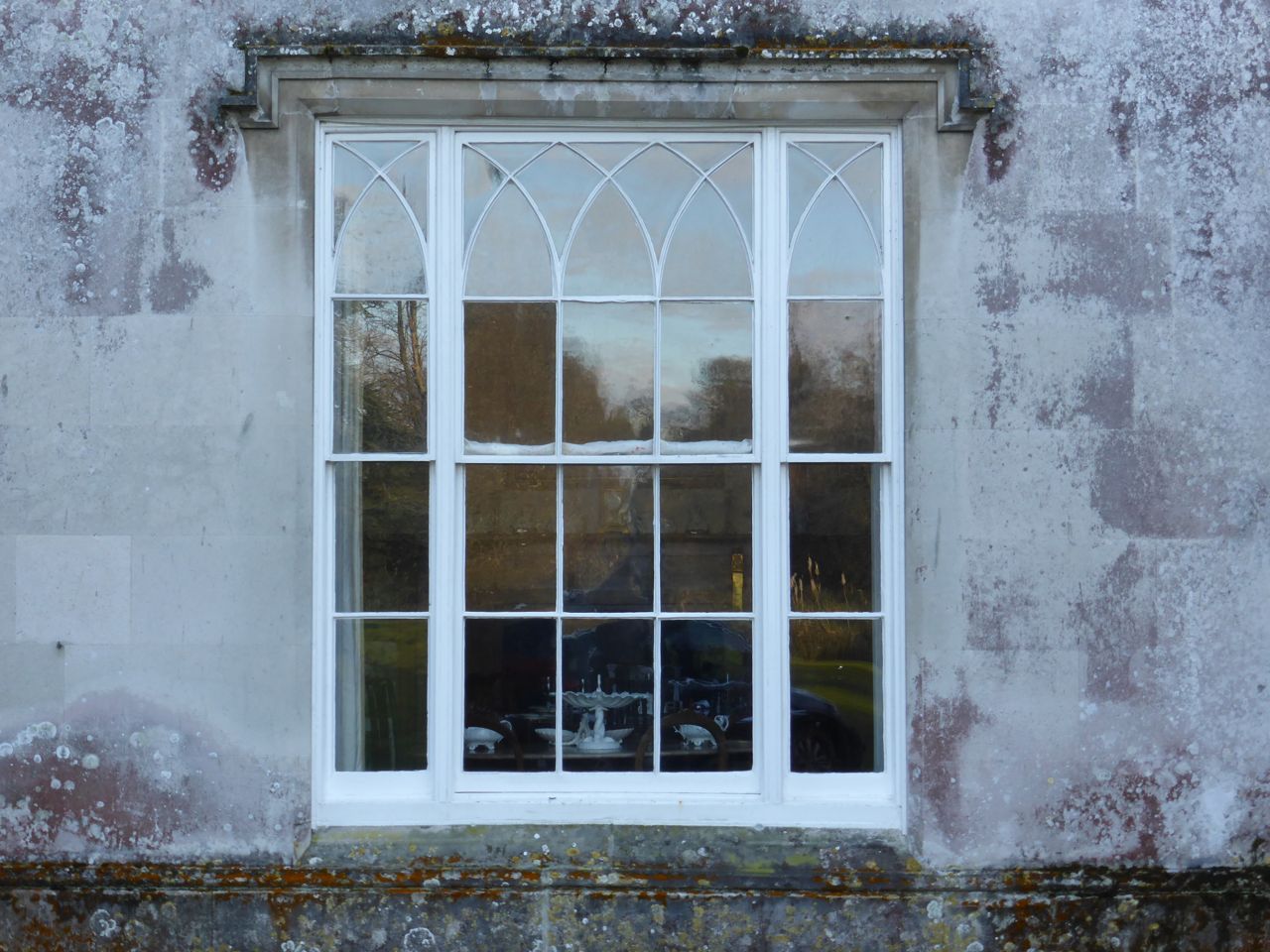 After lunch, we were taken on a tour of one of the great treats of Herringston – one of the most beautiful rooms I know… the first floor drawing room.  It has a remarkable 17th century Jacobean plaster ceiling – a complete dream: 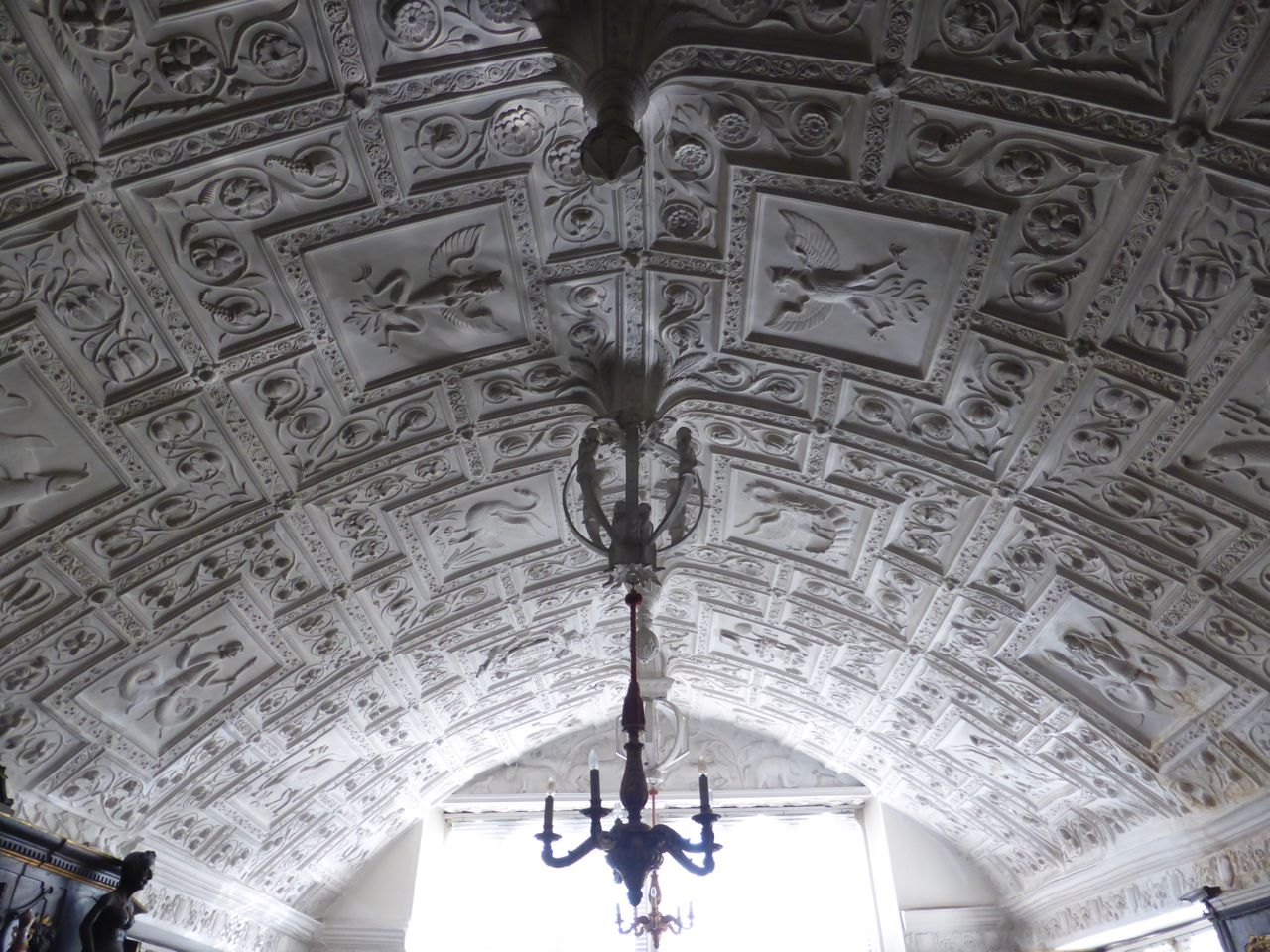 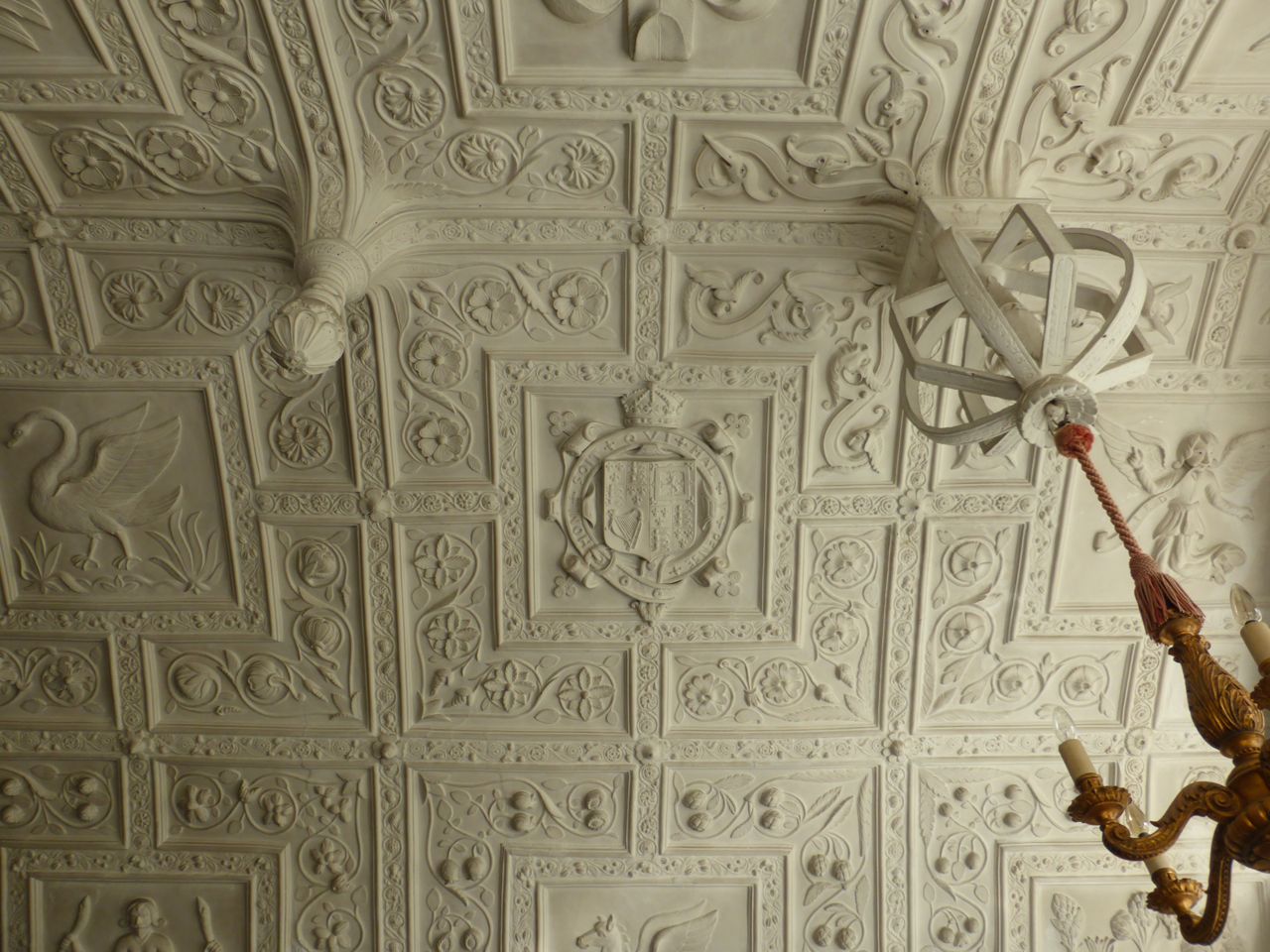 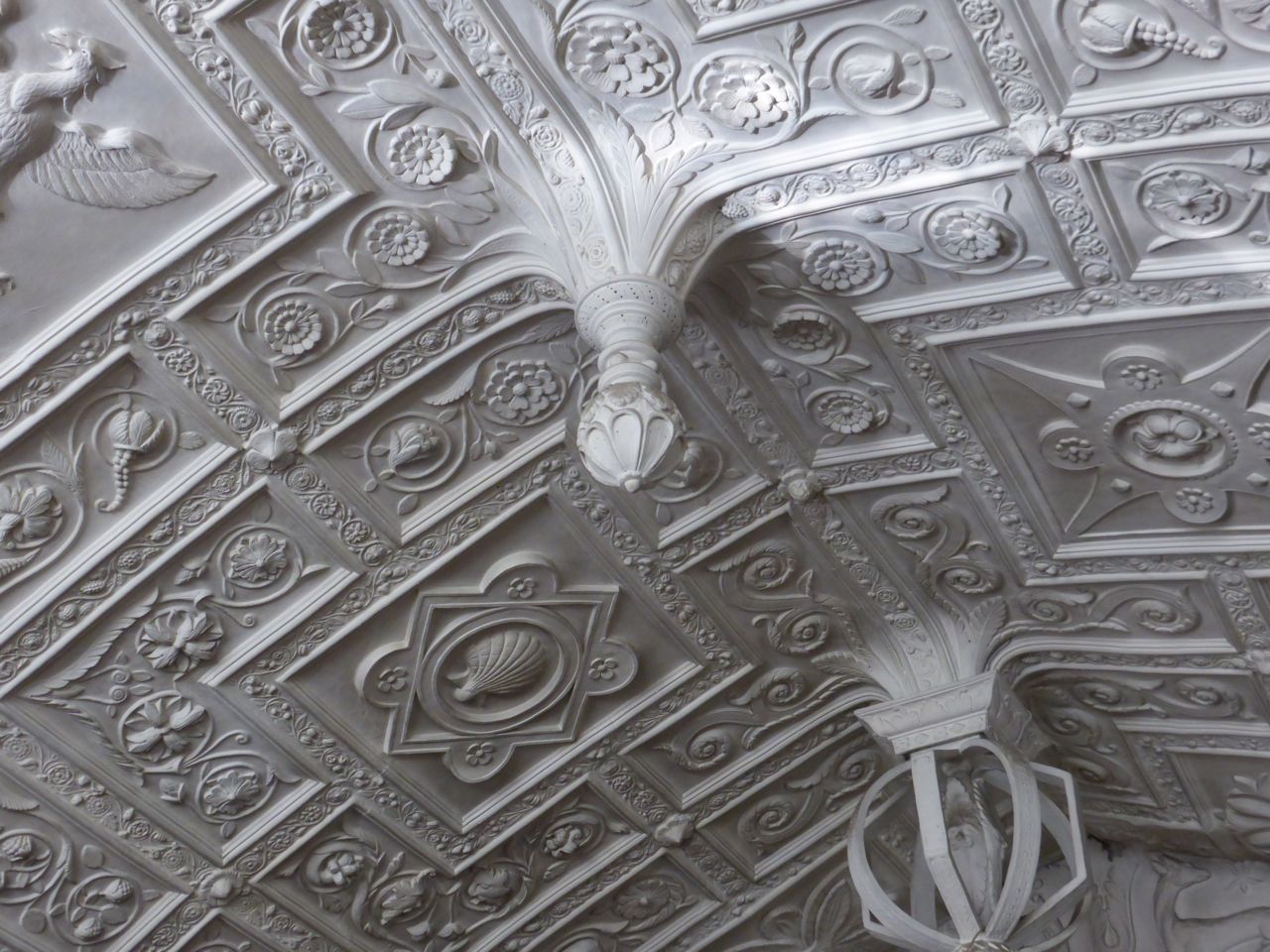 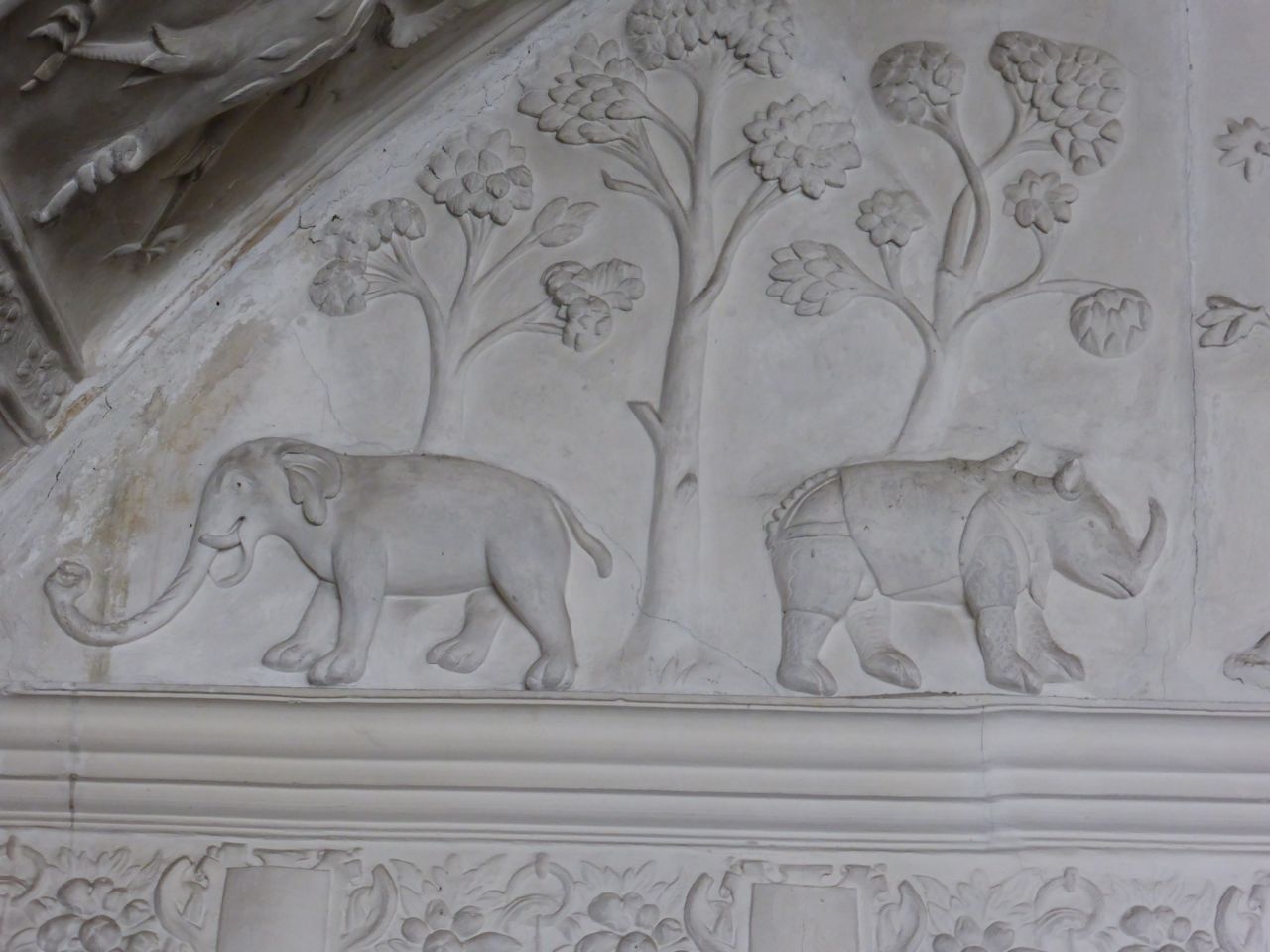 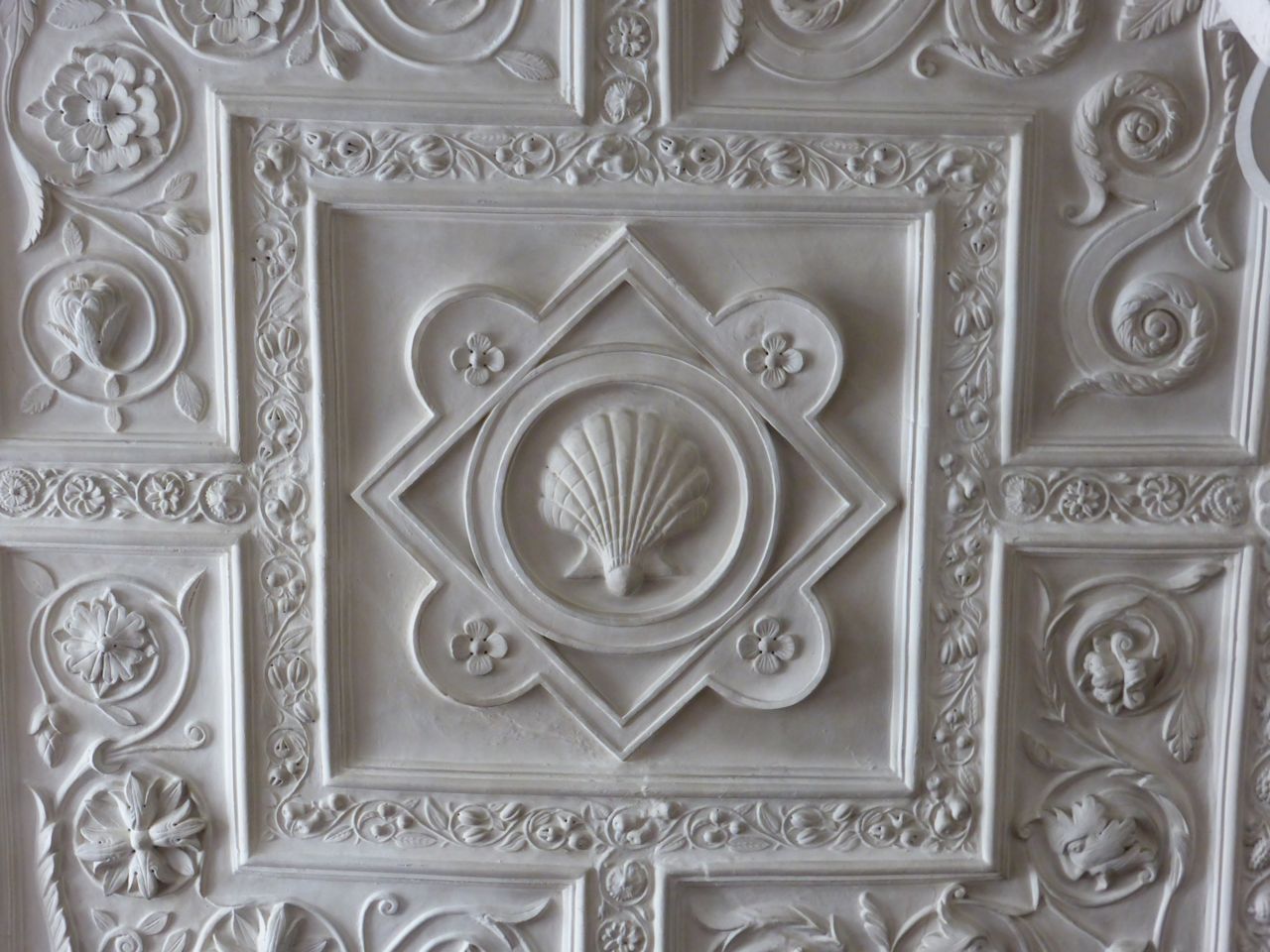 You don’t know where to look.  It’s such a quiet, soft, serene, timeless room – you can only imagine the history that such a place has seen.

A glimpse into the conservatory – February sun streaming in. 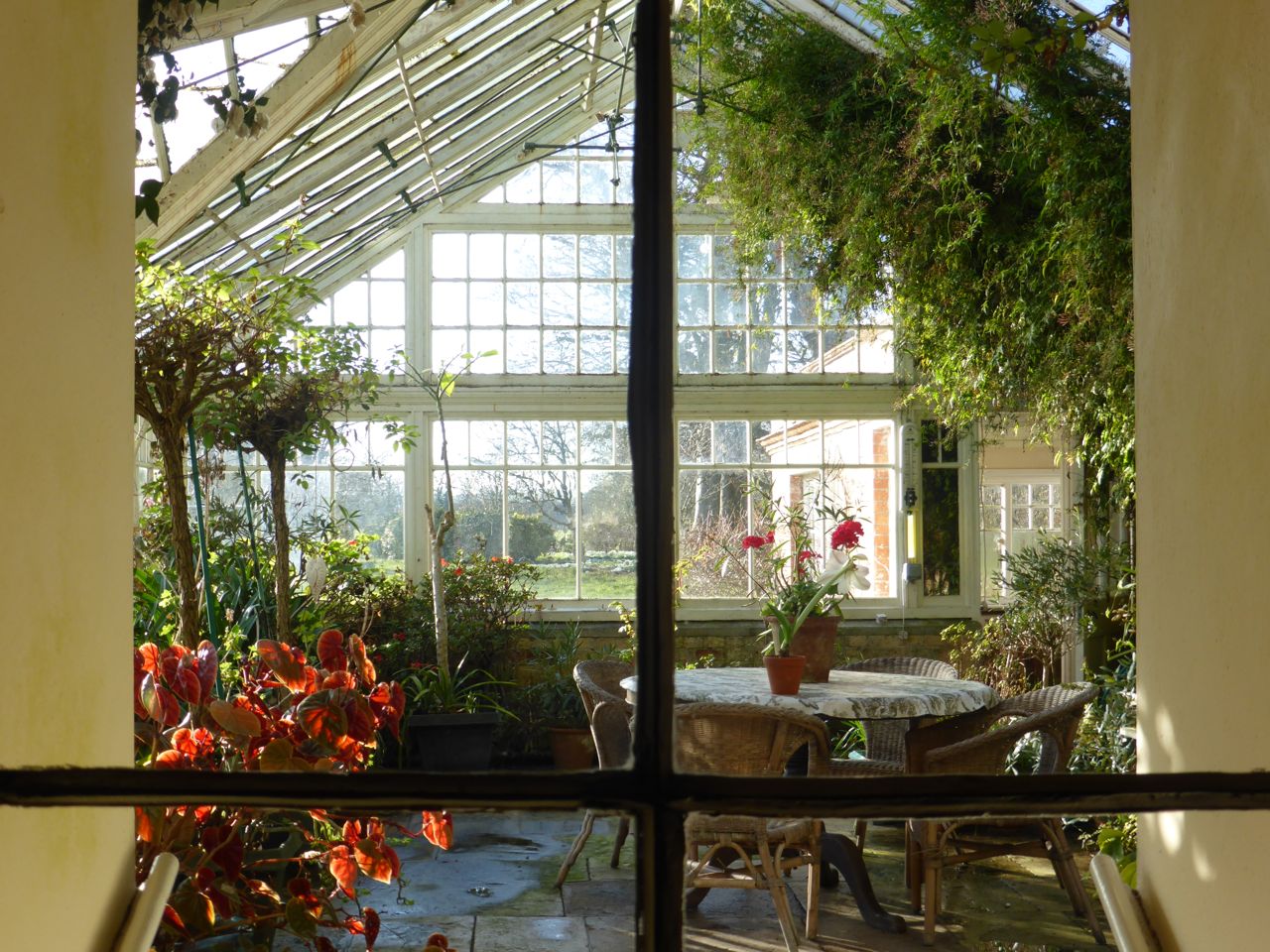 We went for a wonderful walk to the Williams’ beautiful, newly planted wood, and then it was time to make our farewells.  One last round of the snowdrops: 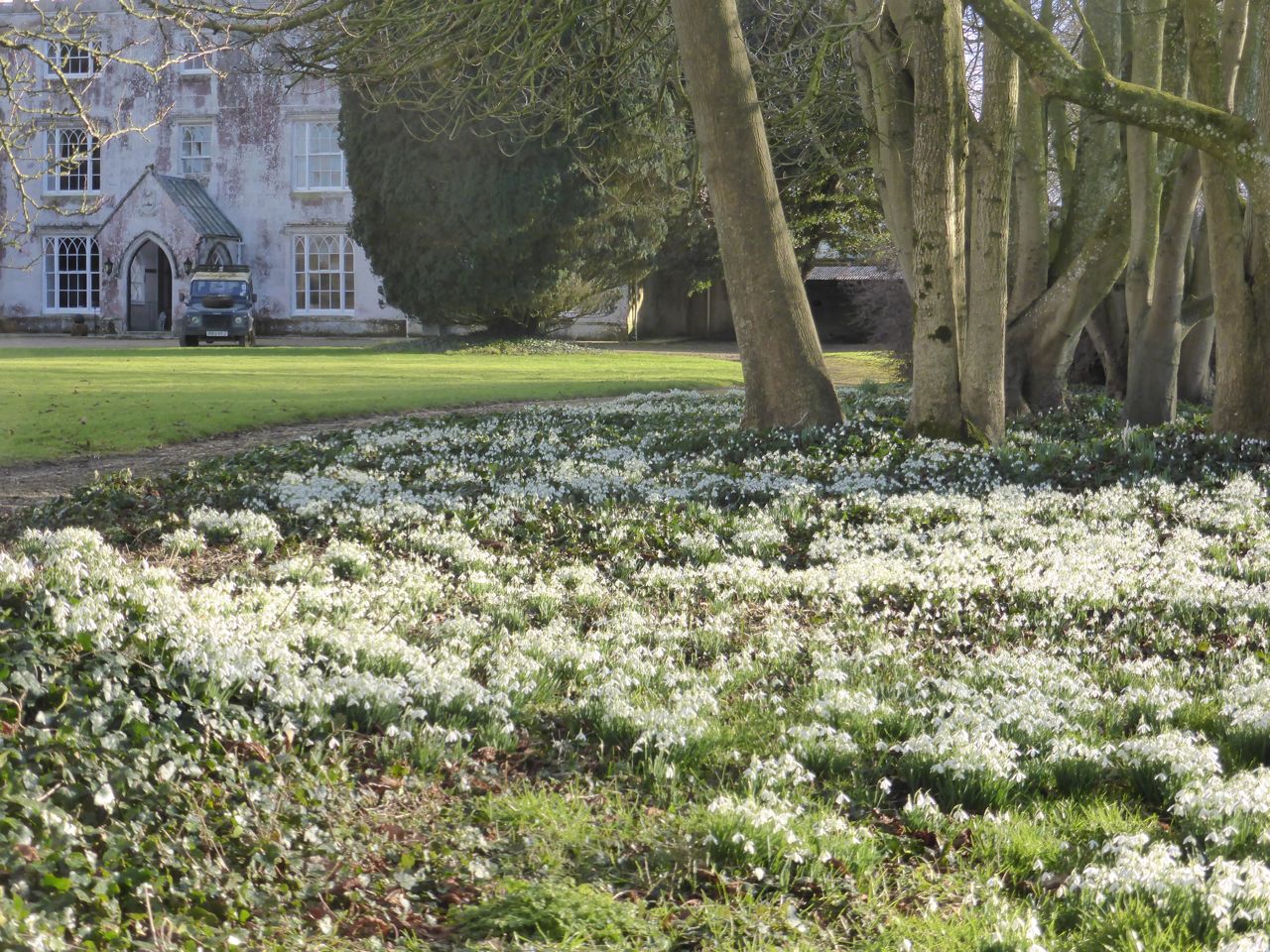 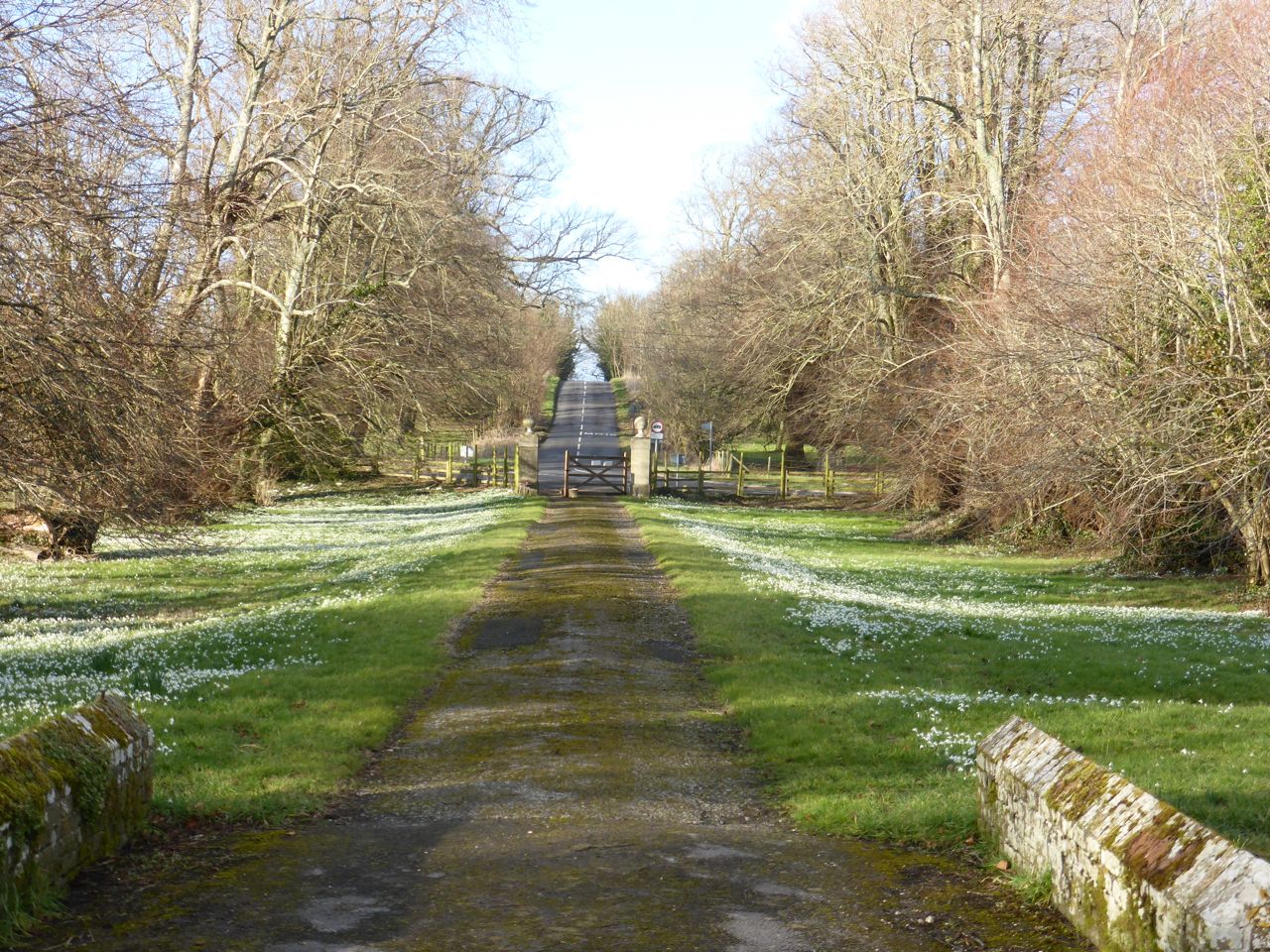 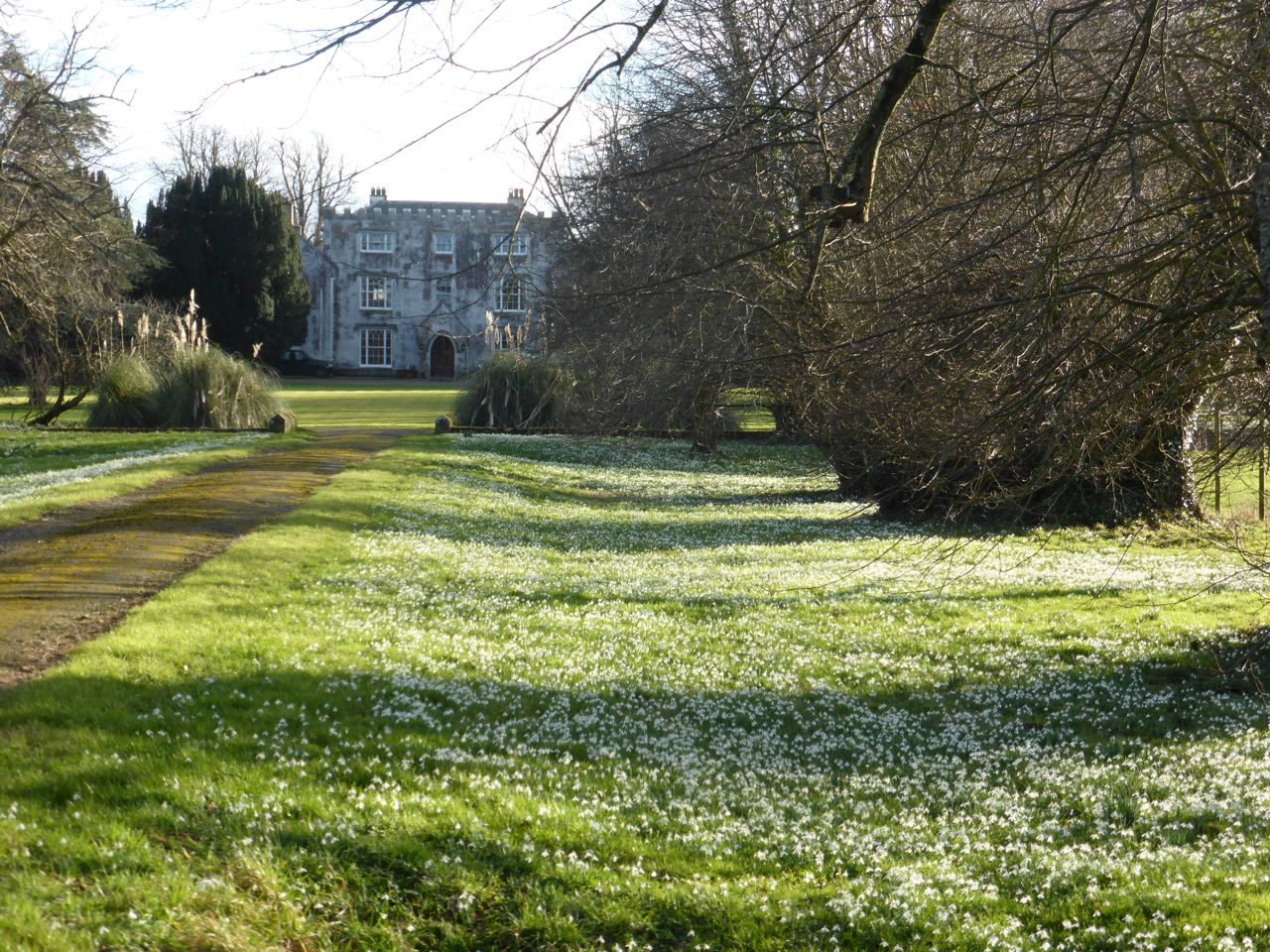 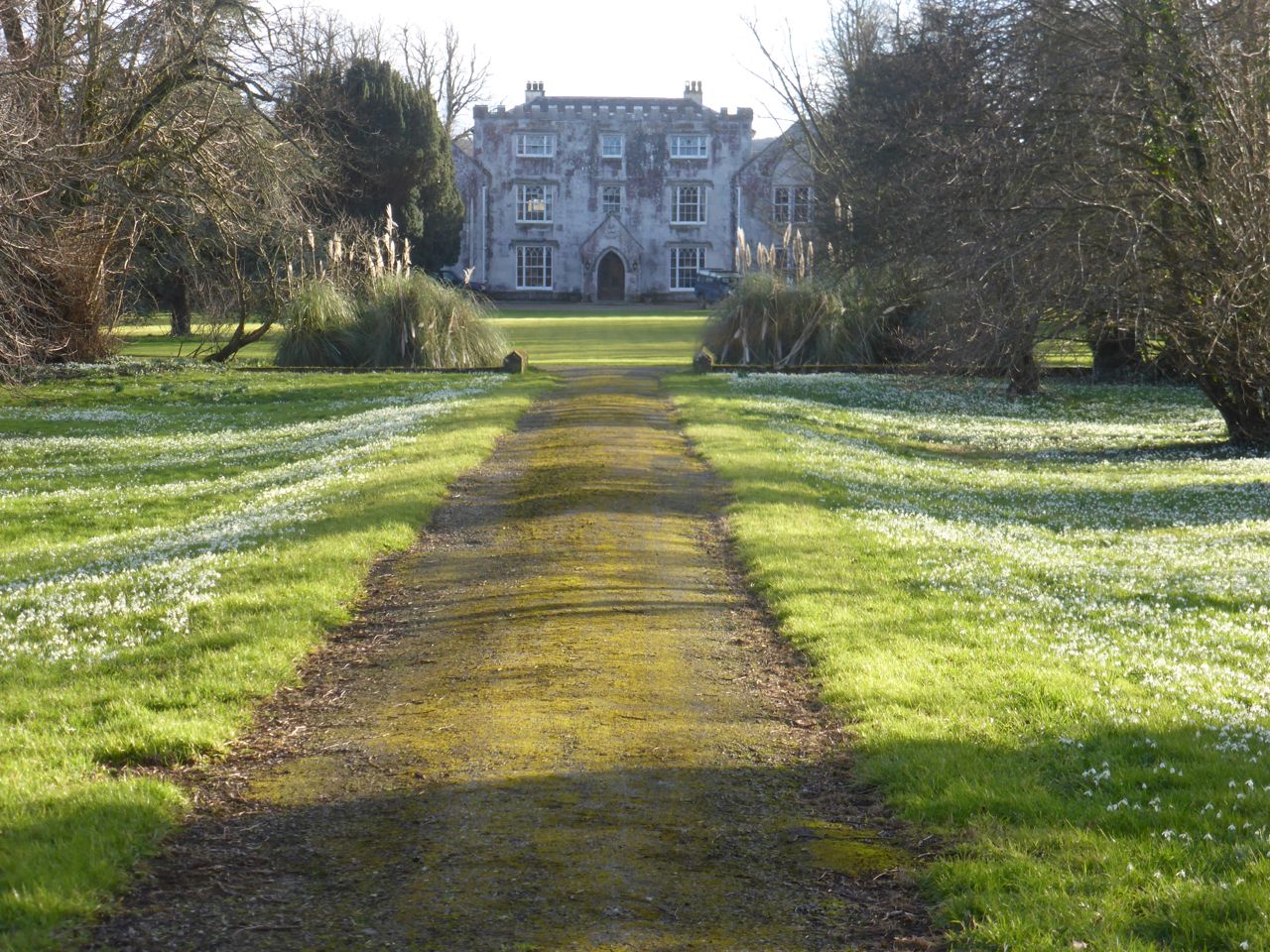 The garden is open at the weekends for snowdrop peeping – all are welcome.  Just turn up – there is an honesty box in aid of the local Hospice at the gate. And so, a long tradition continues.

And that is inspiration. Can you think of a happier place for Valentines day?

What an amazing house and gardens, your photos are balm for the soul

For anyone planning to plant snowdrops they really only ‘take’ if you plant them in the green. Borrow or buy some and plant them out just as the blooms are fading in a lawn or in the soil, ensure they do not dry out but do not let them get waterlogged. If in a lawn just let the grass grow round them until they are brown about 6 weeks after the flowers die, then they will romp away and expand well. The poor dry bulbs rarely perform and really are a waste of time and money and sadly of snowdrops.

How beautiful! I planted more snowdrops this past fall as the others I had seemed to have failed. Maybe Maine is just too cold–we’re certainly frigid this winter. But your photos remind me I have something to look forward to. Your photos are always a treat!

Beautiful. I do love snowdrops. When my mum was a child in the 1930s, a relative would send her from Tolpuddle a bunch of the first spring snowdrops, wrapped in moss. When she told me the story I was enchanted. My lovely mum took note and did the same for me every year I was at boarding school and then when I was at university and beyond.

Now that I am sent them no longer, the sight of them is bittersweet.

Sigh … many thanks for sharing. Snowdrops out fully in village of Rockcliffe, in Galloway, South-West Scotland, where I am for half-term, and where I just sat outside with my coffee in full sun! Warm. Unlike Edinburgh, when I left it was still bitterly cold and foggy. Snowdrop time is cool. Thanks B, have a great week. sx

I have resisted adding to the storm of happy emails that followed your marriage to Charlie, but now I can’t resist saying how thrilled I am that two people can be so happy, as depicted in the Weekend FT, in the newly decorated bedroom and now your Valentine’s Snowdrop peep, it is a joy.
Thank you for sharing your happiness with us, and sharing all that you see around you … another book, please! We are all going to have to keep on our toes to keep up with “The Charlie Influence” on the new fresh Pentreath look…..
Come to the Yorkshire Dales to see where Wuthering Heights was filmed by Andrea Arnold, we have a different natural wild beauty up here too, these gardens are a living history.

This blog calls for a mug of tea in my snowdrop mug! The snowdrops are breathtaking, the ageing Range Rover is very cool. the ceiling is amazing, and the windows are awesome! What a beautiful home and a beautiful spot. Just going to put the kettle on….

If those massed snowdrops aren’t a parable from Mother Nature, I don’t know what is. Flower-power indeed! White snowdrops outside, white ceiling inside (blooming with seashells and exotic beasts, as well as flowers.) A lovely post for a cold Monday. Cold, as in -20 C. No snowdrops here, alas. Thank you for sharing yours!

How happy these photos make me here in Boston, where we’ve got six feet of snow piled up under our windows and a windchill that would make a polar bear shiver.

We all come alive when we see the snowdrops, gives us hope spring is just around the corner and before we know it summer well on it’s way. If anyone is in Northamptonshire and wants to see a carpet of snowdrops visit the Church in the village of Chelveston, just amazing sight and so peaceful.
Thanks again Ben for such beautiful pictures and inspiration.
PS the shop last week was total bliss.

I should have directed the snowdrop comment to Southern Gal. They should grow in the Hudson Valley; at least you do not have to contend with the wind howling off the Atlantic there.

Ben, I can’t believe we both did snowdrop blog posts at the same time. Must be February. Yours is much more cheerful, I must admit. I’d give me eye-teeth to be looking at that carpet of snowdrops now.

Charlotte K, I feel your pain. I’m in Cambridge, MA. But take heart—snowdrops grow here; my father has them next to his greenhouse on the South Shore. Of course, with our nanosecond spring, one has to look sharp, or one will miss them.

That house is the stuff of dreams.

My husband and I are going to Bath in June for a family wedding. Will stop by the shop if there is time enough to venture into the Smoke.

It is not the ceiling I love as much as the conservatory, the walled garden, the drive and the ageing Land Rover. How heavenly, Thank you for sharing this wonderful post.

Cool cool cool. Palette of white, grey, green. And that ceiling is good enough to EAT! But where is the gothicke cat? Many thanks to you and your friends for sharing this particular domain. Nicola

I’m happy to be in the UK and able to attest to the beauty of the snowdrops in general.

If Charlie should happen to need another snowdrop fix, there’s Snowdrop Valley just outside of Dunster. Wheddon Cross, I think. We almost went, but didn’t quite, because we were too busy flying up hill and down dale in pursuit of the perfect dilapidated house on which to pin our fantasies (and quite possibly our dosh). And there are a surprising number of them out there. Some the object of family disputes, some too close to roads, some too messed around…. but oh, all delicious in their own way.

When you said “Can we also talk about how cool the ageing Land-Rover is, outside the aged grey stucco facade of the house?” I thought damn the Land-Rover, can we just talk about getting inside that glorious house? Urgently? And then we did and I felt absolutely sick with lust over that ceiling. To live with that every day! Thank you to the Williamses and may your snowdrops return every year. And thank you to you , Ben and Charlie, for bringing it to us.

That ceiling took my breath away- the detail is incredible!! Thank you so much for these photos! Also for the snowdrop photos- there is nothing so cheering as the sight of the first snowdrops braving the harsh February winds! Makes me want to revisit Dorset. The news has been, as ever sadly, so filled with violence and hatred, that one really does need reminding of the opposite side of man’s nature- passionate, creative, protean..
I think I’ll be dreaming of that ceiling tonight!

also… omg that ceiling!
and the conservatory… and the cat flap!
what a house – wonder what the rest looks like!

construction business must be prosperous!

oh my. i am in the Hudson Valley where we are having the coldest weather in decades… it was -20 below Wind Chill last night and there is about 2 feet of snow in the garden – well, covering the garden. my poor camellia bushes are poking bravely above the snow.

i have never seen a live snowdrop… to see these photos – so exquisite!

thanks again for sharing.

and what a house! the kind i dream of owning.

Such a beautiful post. Thank you for bringing this private house and garden to all of us to enjoy. The sense of peace and undisturbed beauty comes through very evocatively. So nice to experience historic England that has not been commercialized to pay for the upkeep,etc. May they continue to keep this treasure as it is within their family.

The snowdrops are indeed amazing, incredible like a galaxy of stars. (My boyfriend works at Anglesey Abbey, near Cambridge, and they are the midst of snowdrop season, a week ago they had over three thousand visitors.) The front facade of Herrington is beautiful too, the plaster ceiling sumptuous. A treasure.

Wow. Snowdrops are my favorite flower. I live just outside Boston, Massachusetts, where we’ve just found out this is the 3rd snowiest winter since they began keeping records. It’s snowing and blowing now…again. So your snowdrops give me great pleasure. I’m not sure I will see my own this year. And if so, it will probably be in April.

I’m coming to London in March to escape all this, and I’m hoping to visit your shop!