We were in Dorset during the week…. always a pleasure. It was Dad’s birthday supper on Tuesday; I visited local job sites on Wednesday, including a meeting for the church re-roofing project, which is about to start (that is a very local job), and we had our Poundbury site day on Thursday. The golden evenings have been beautiful. 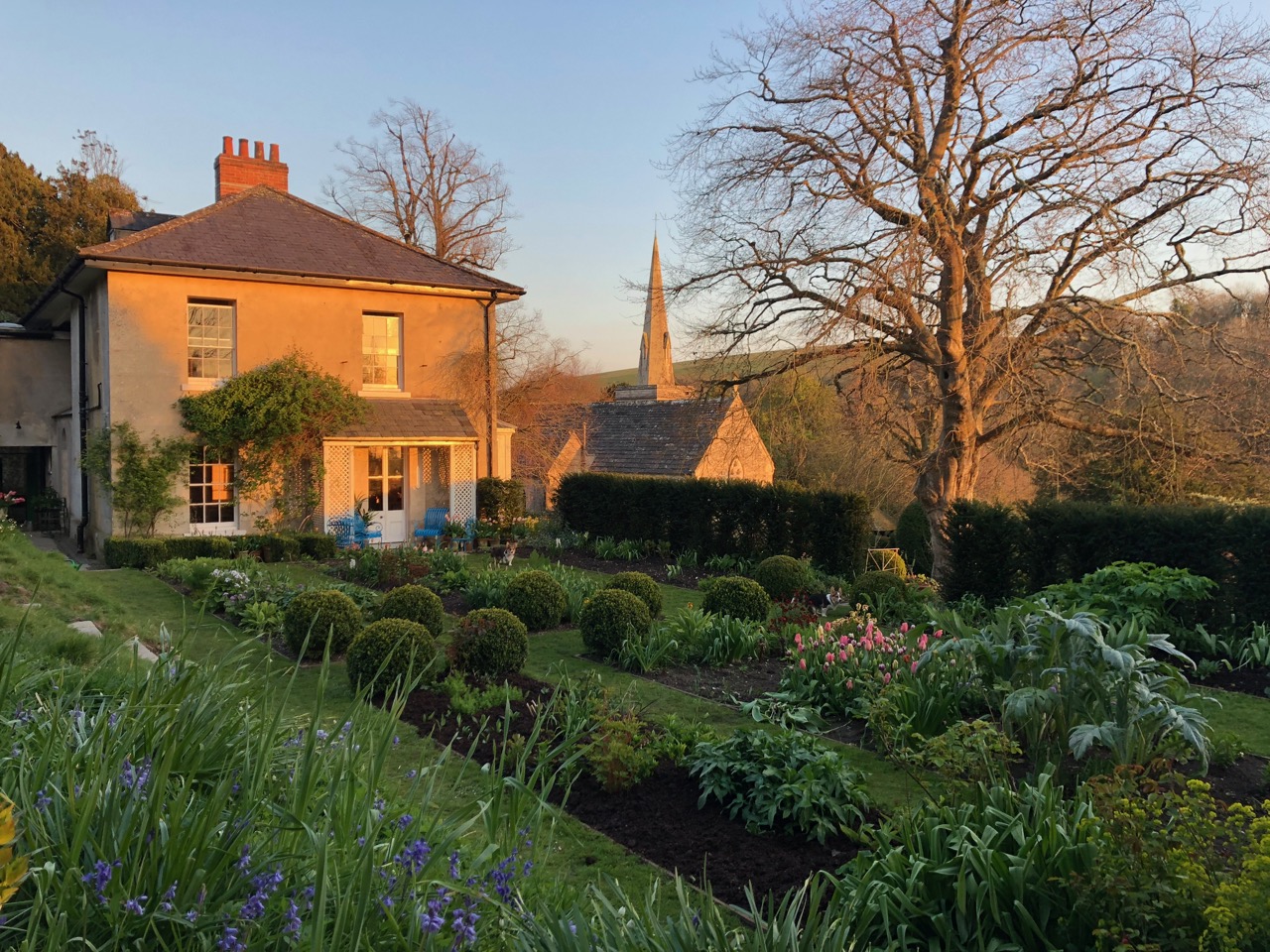 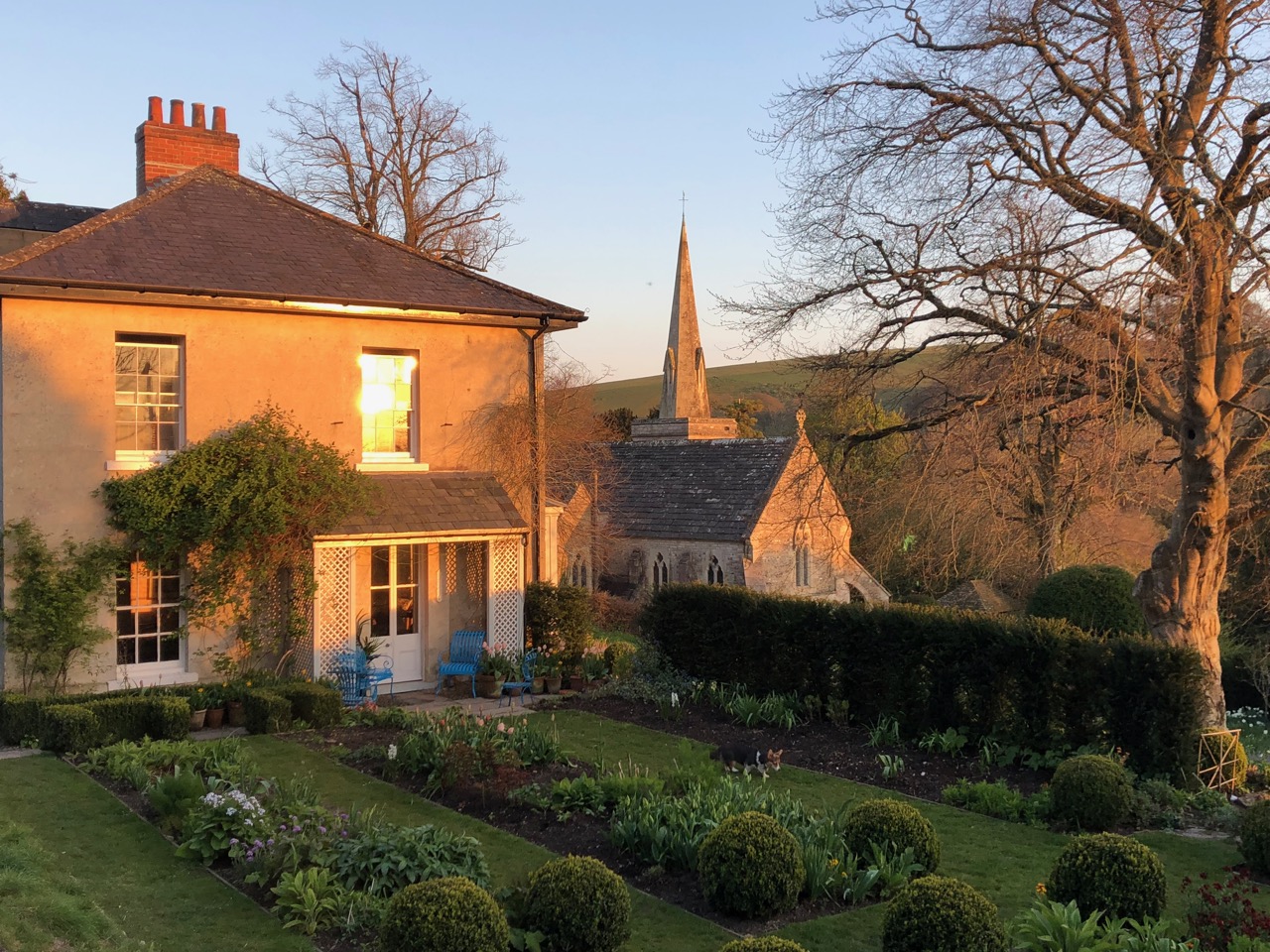 Charlie hasn’t planted quite so many thousands of tulips this year, but he’s done three smaller blocks as cutting patches in the lawn borders, and they are still pretty amazing. 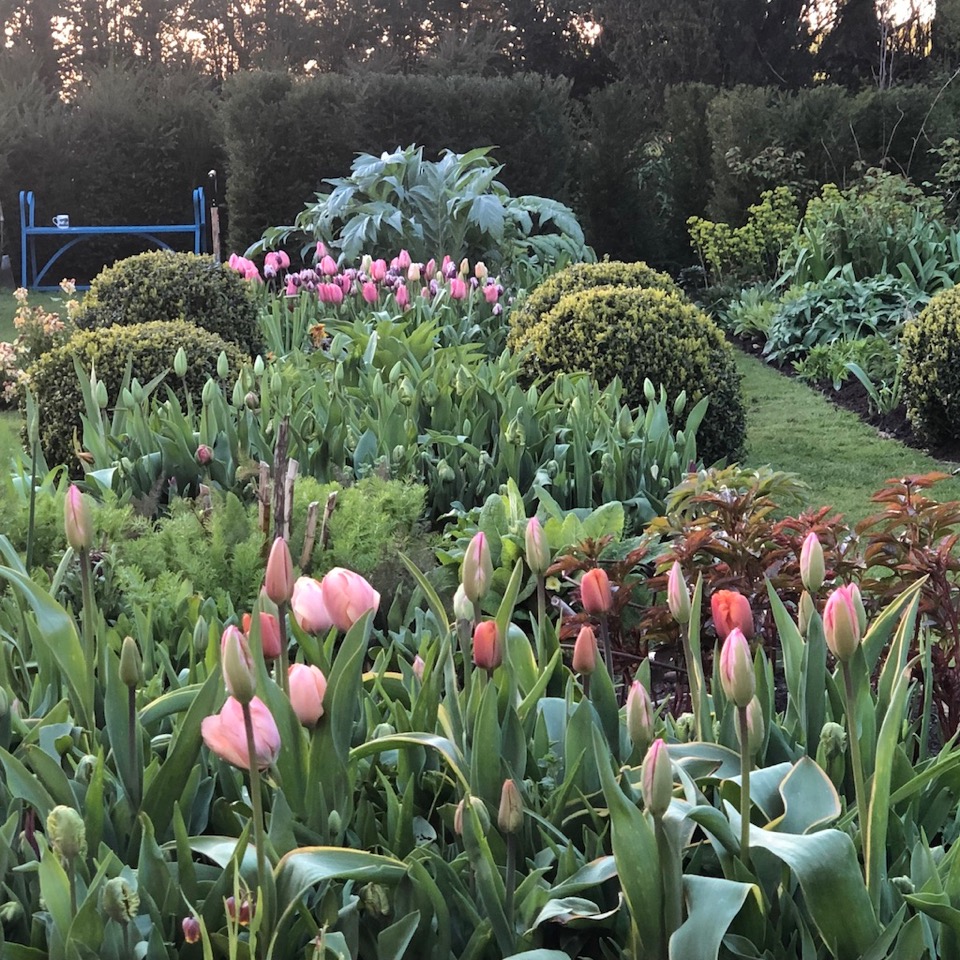 Down in the meadow the cowslips are crazy. We planted a few plugs about five years ago; now they are everywhere. I think they are one of my favourite flowers, although I’d always forget to mention that if they weren’t out at the time. 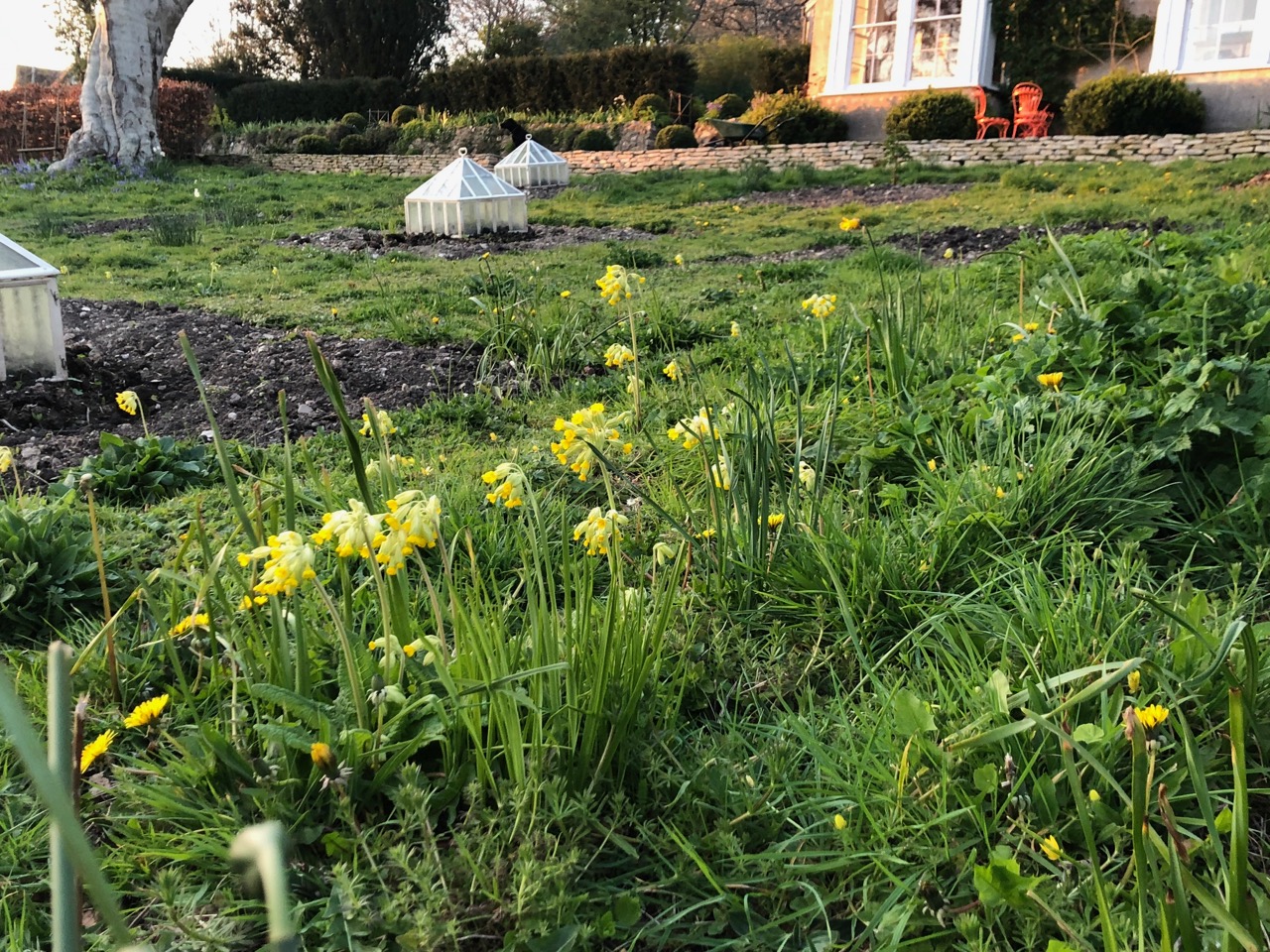 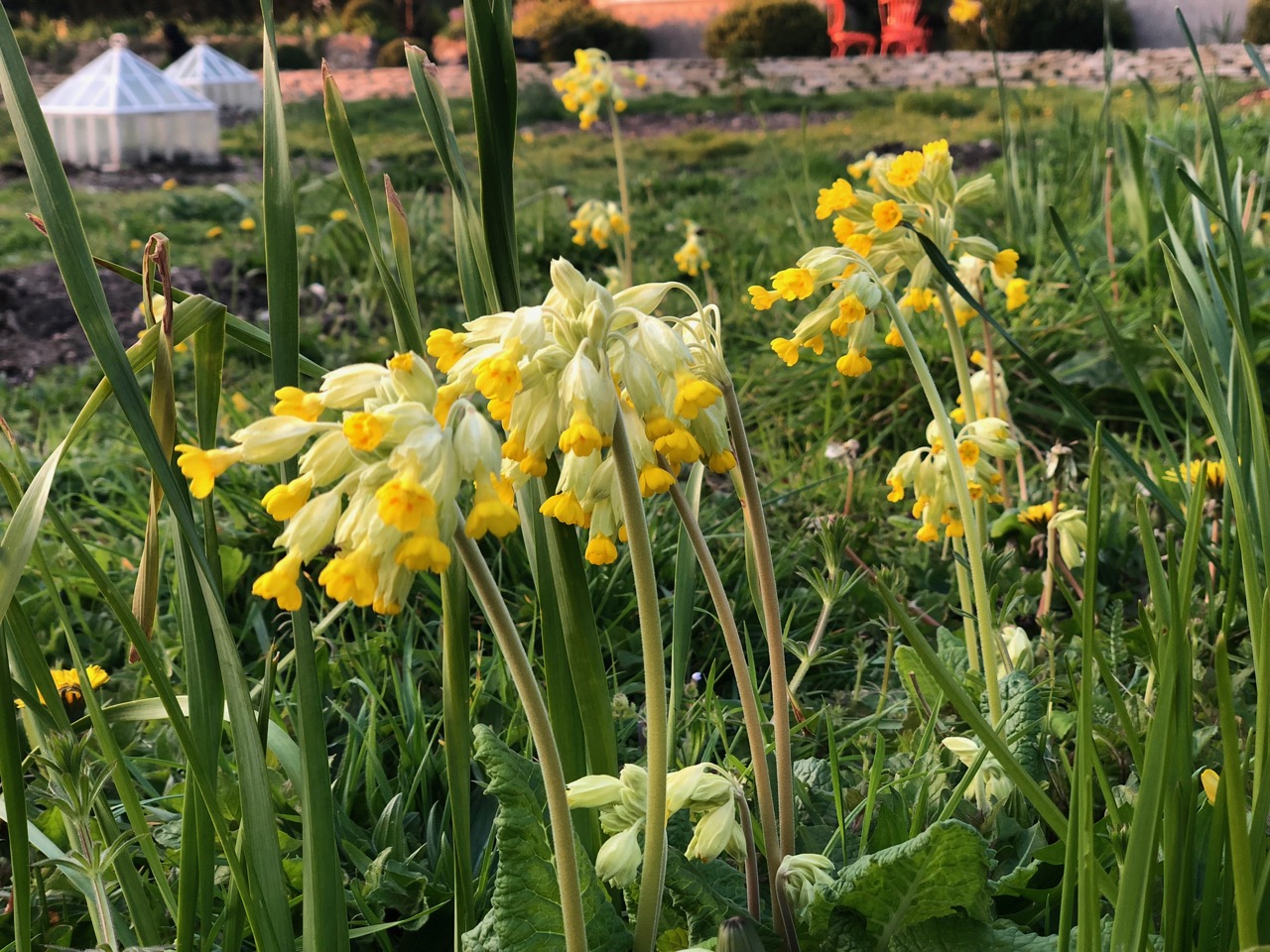 On Wednesday night we went for supper with our neighbours. The sunset over the valley was breathtaking. 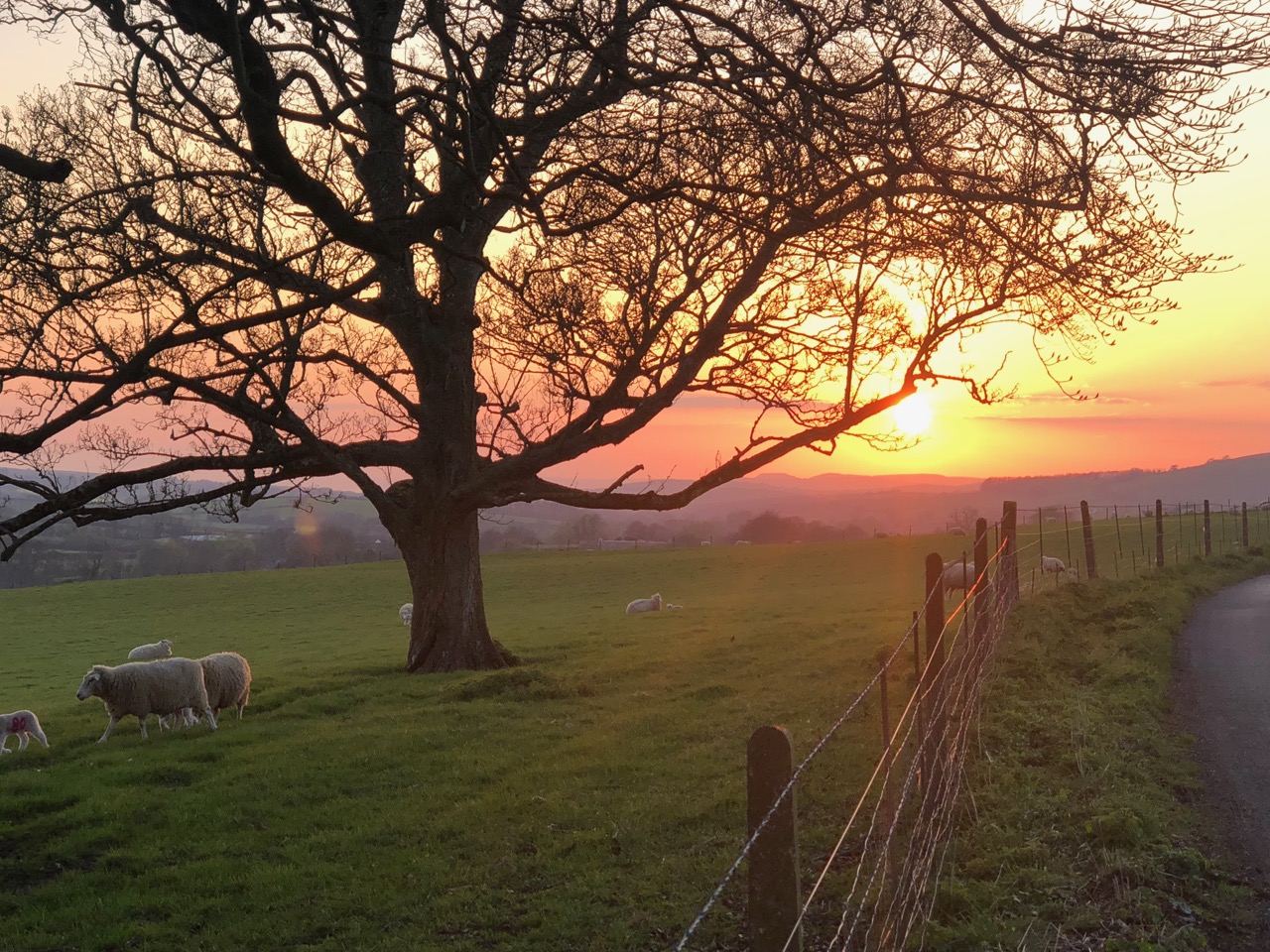 Those nine beds that Charlie’s dug in the meadow are for his giant pumpkins and marrows.  the soil is warming up under the cloches. The dining room has been taken over as the seed nursery…. 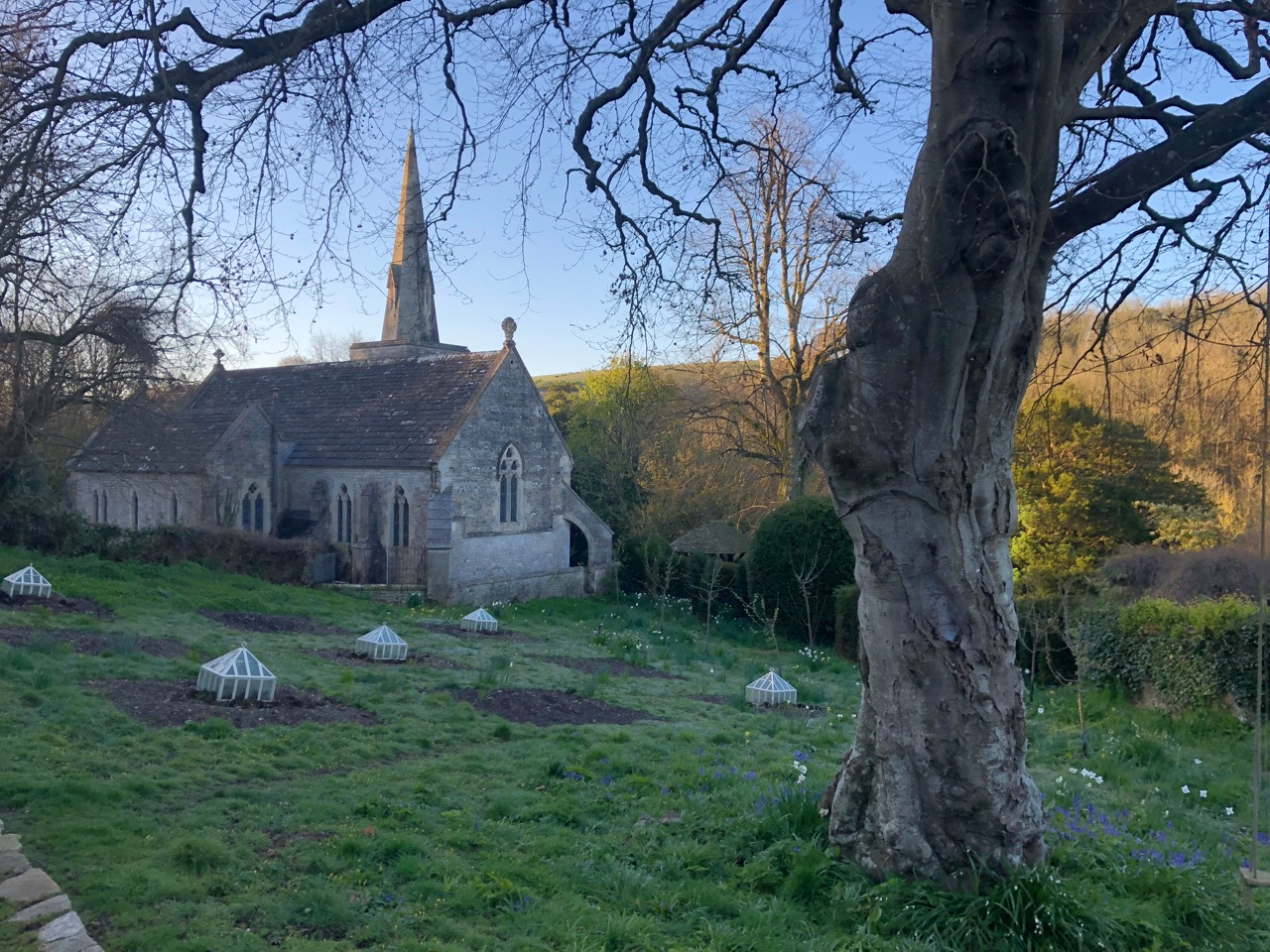 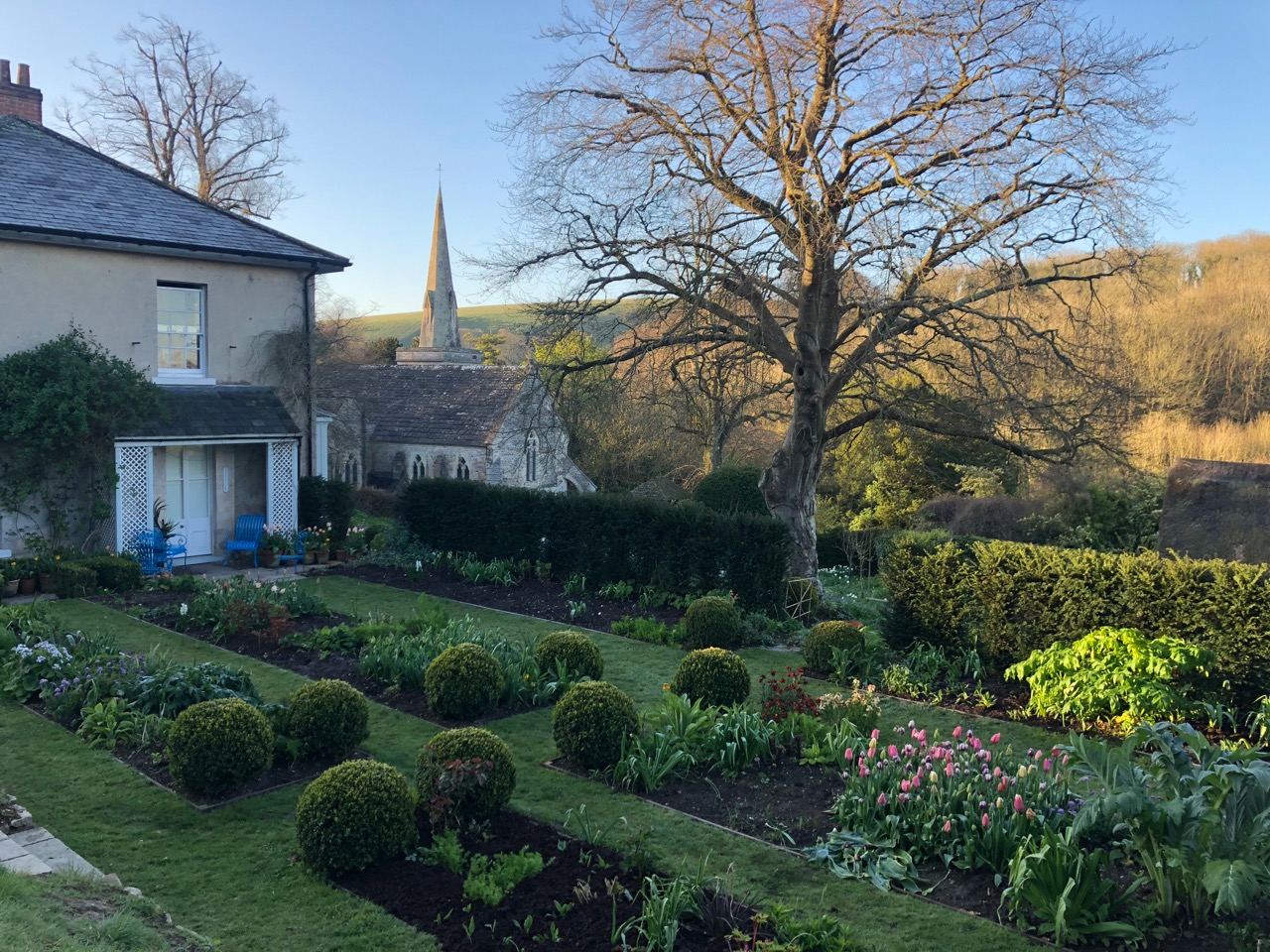 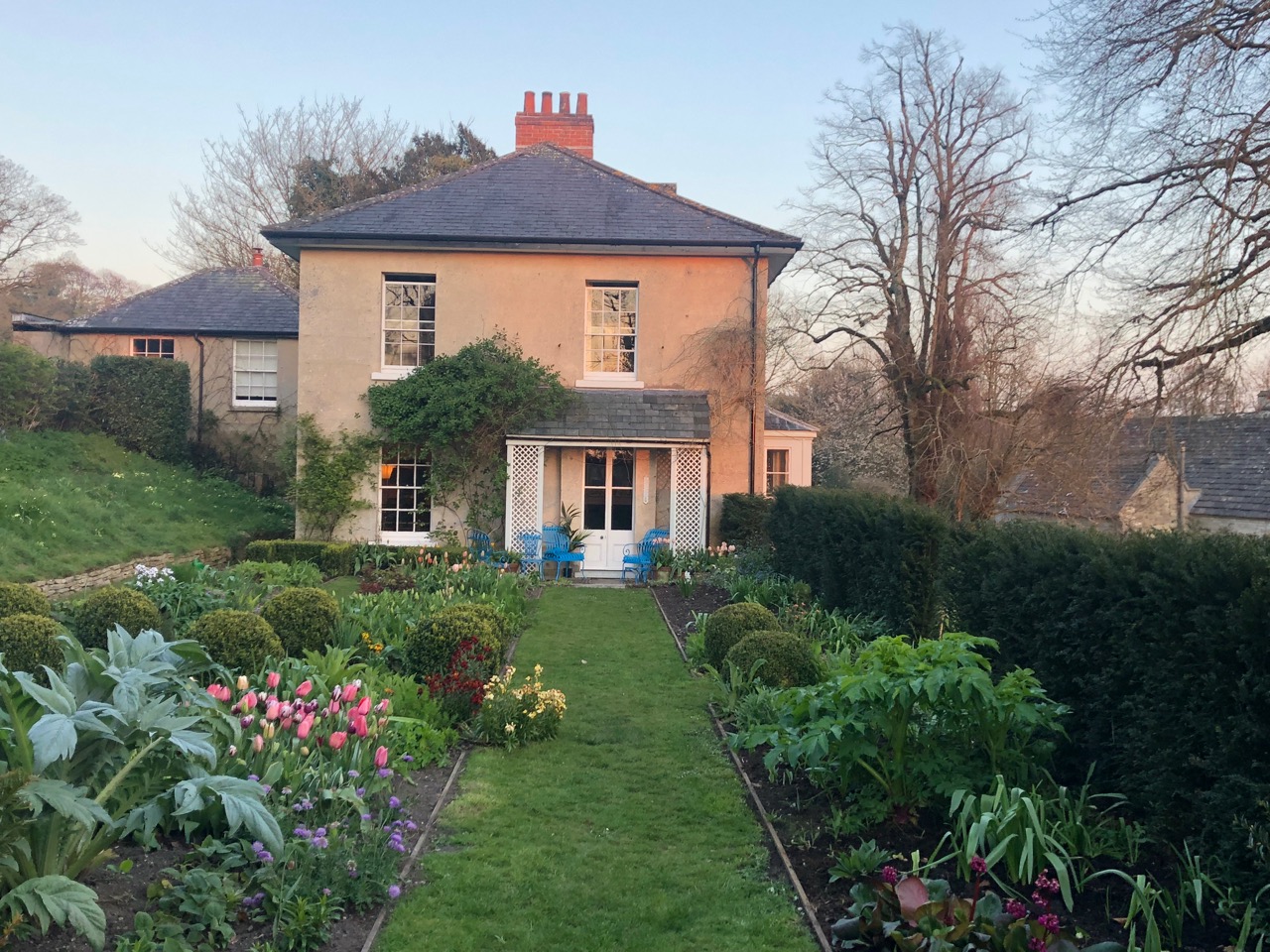 A last walk on Friday…. the sun has been shining but the air is crisp and clear, with an arctic wind blowing. 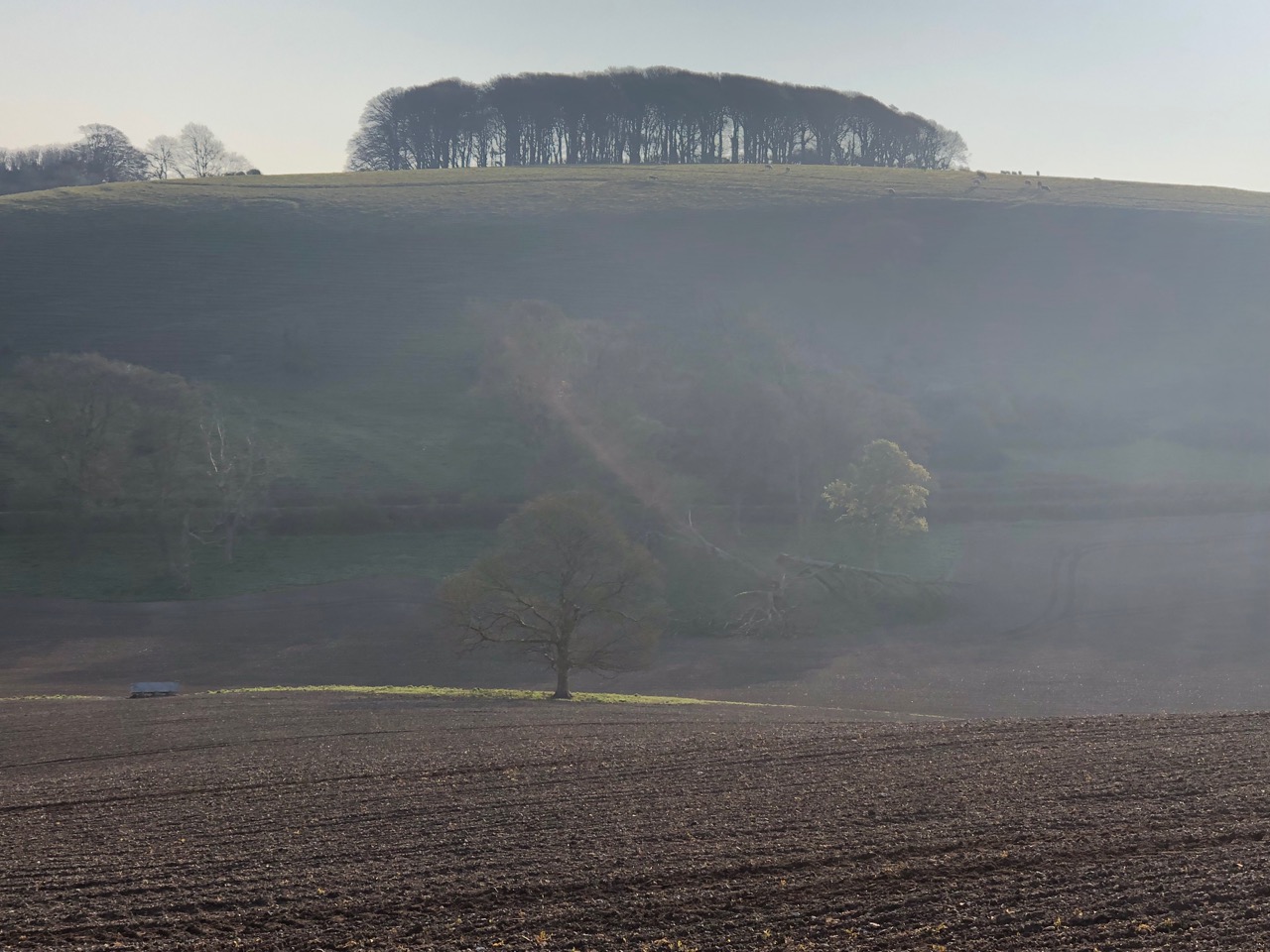 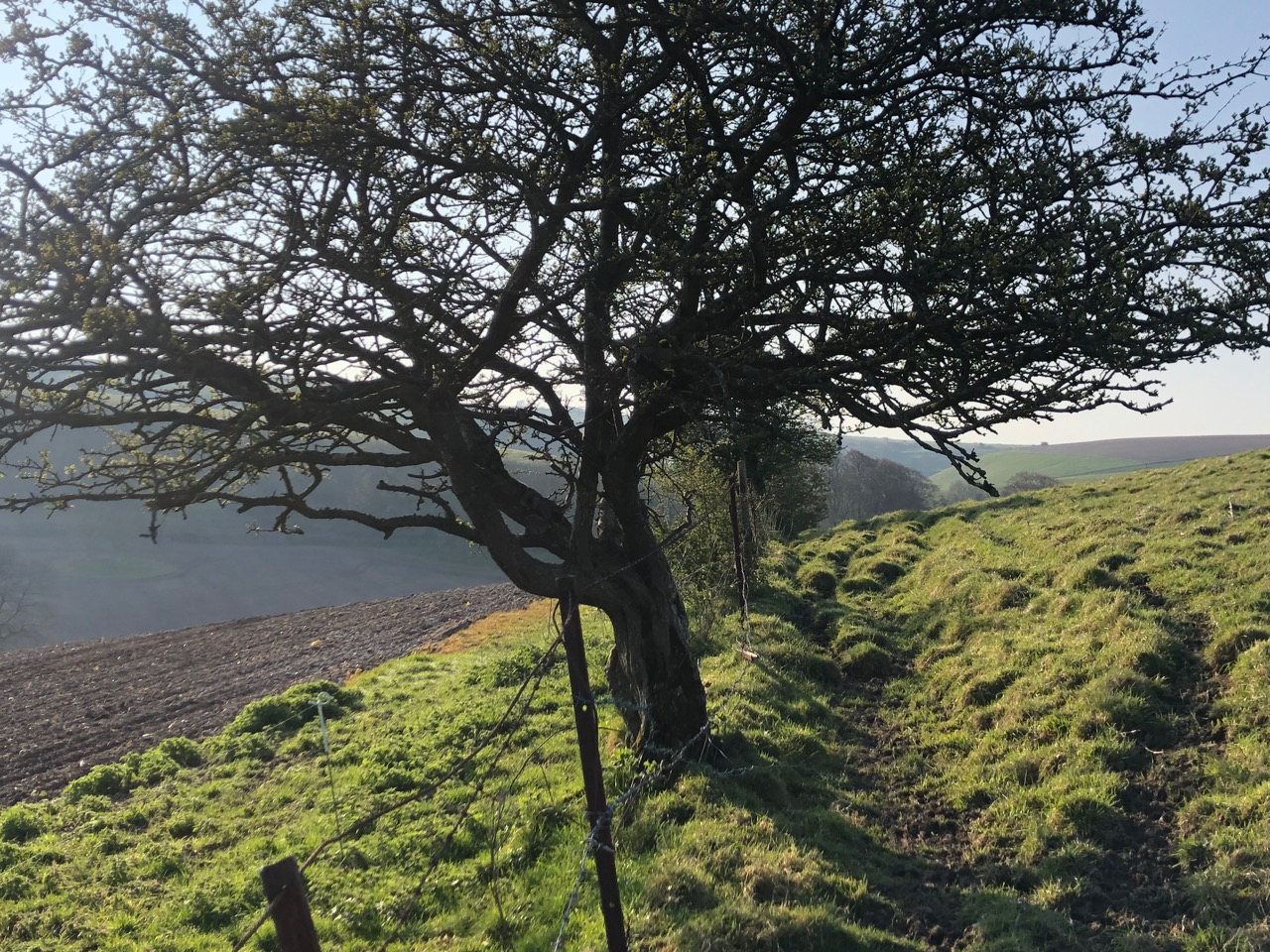 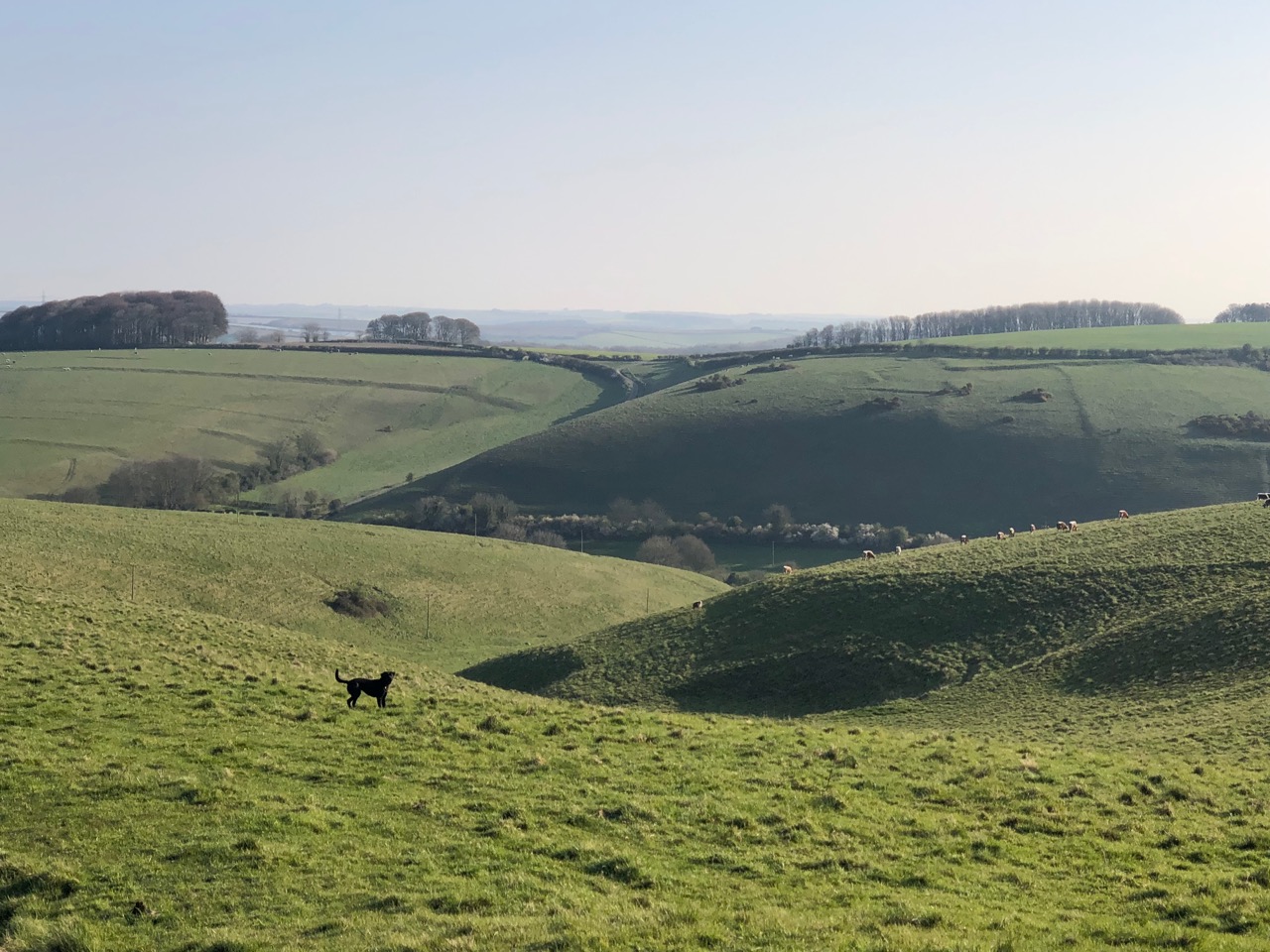 The blackthorn in is blossom.  I love those two ancient Sarsen stones that sit on the valley floor, looking always like cows lying down sleeping. 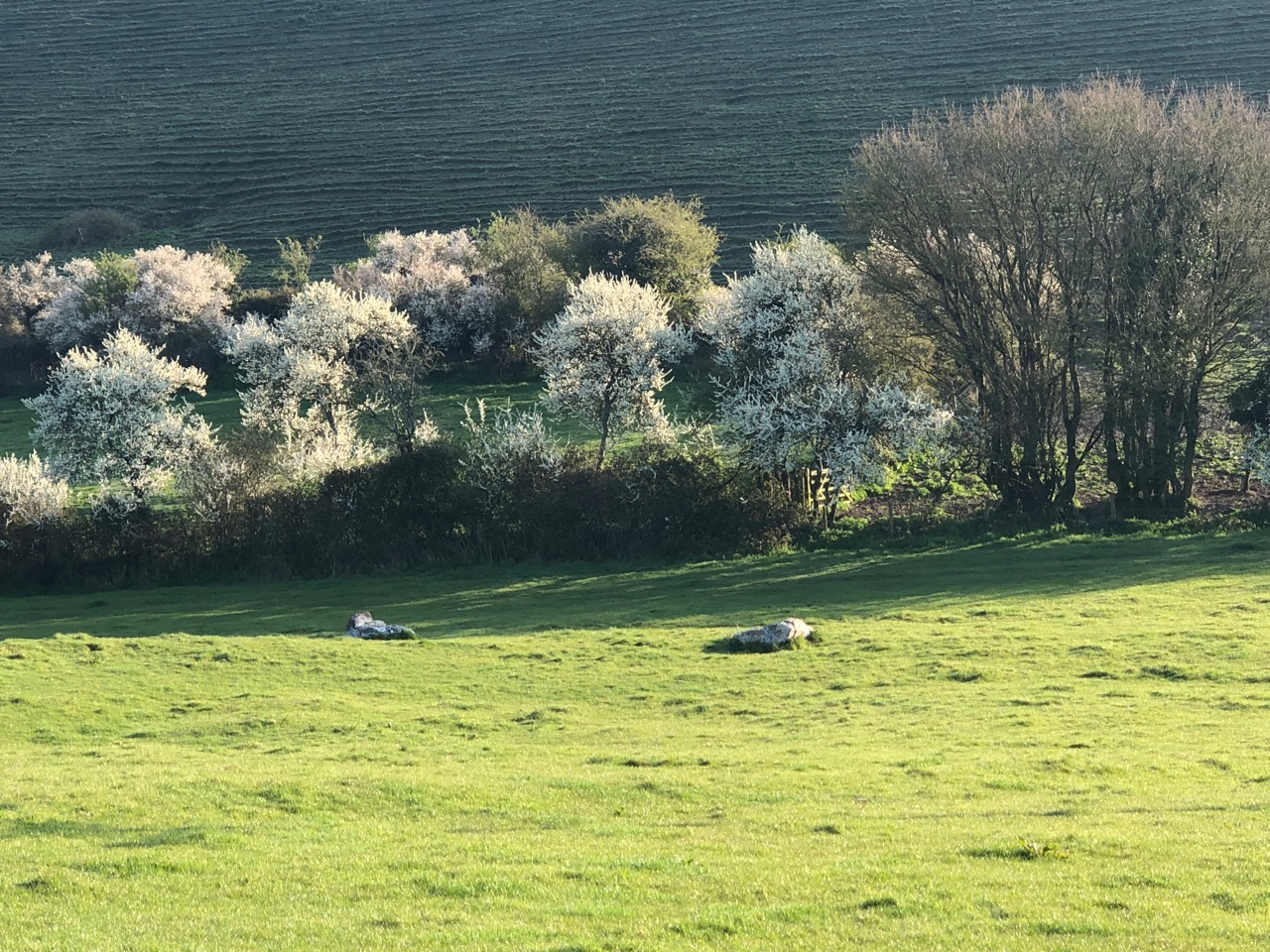 And then I was via Winchester and London and up to Suffolk for the weekend. I was staying with Charles Morris, my old boss, and his wife Rachel.  Here is their beautiful garden, which they planted only ten years ago, on a high bluff overlooking the Blythe Estuary in Suffolk. 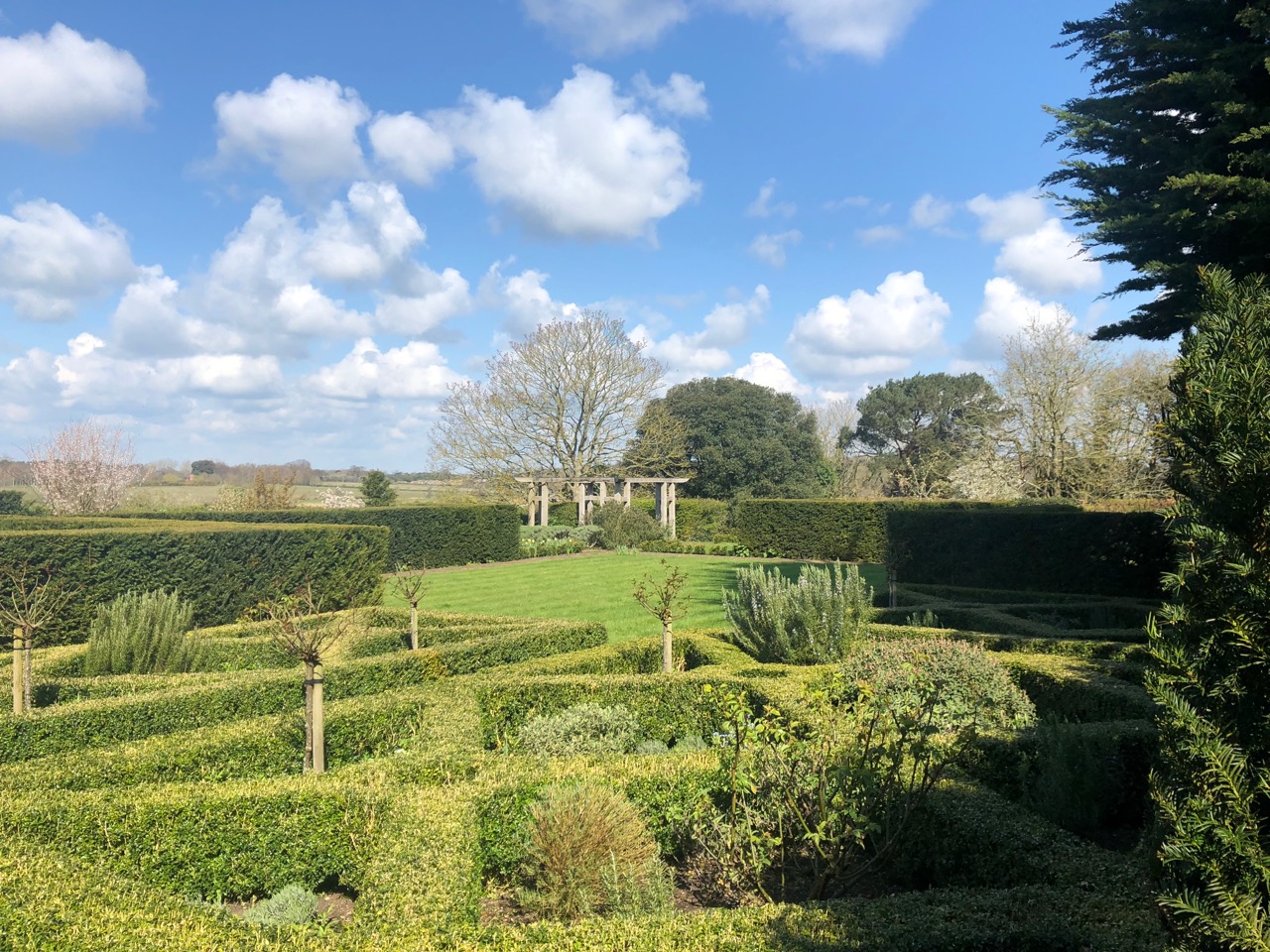 Rachel’s veg garden with its little greenhouse is always neat as a pin. 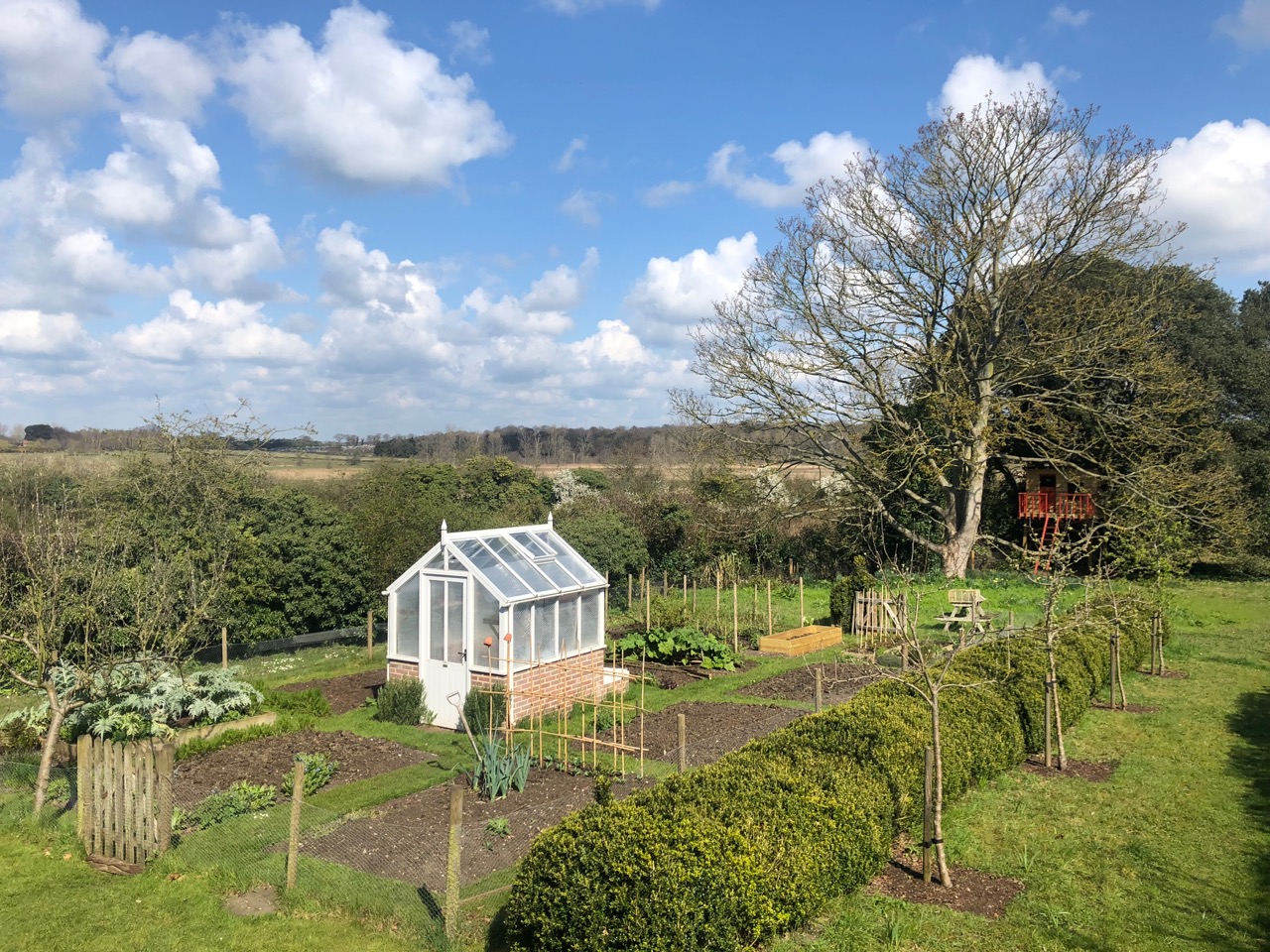 Looking back up to beautiful Blythburgh church. 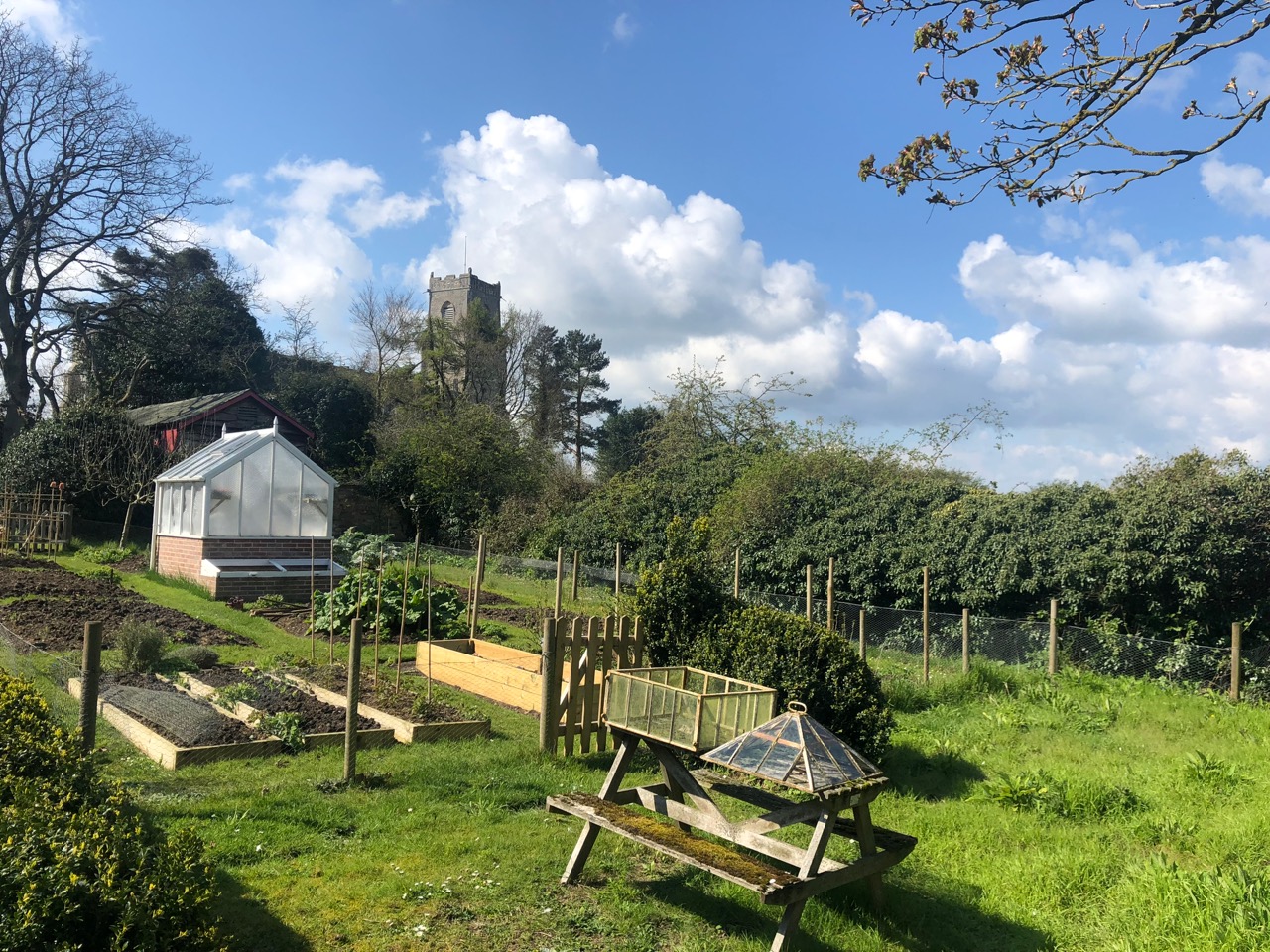 The church is a dreamy Gothic building, with astonishing flint work. 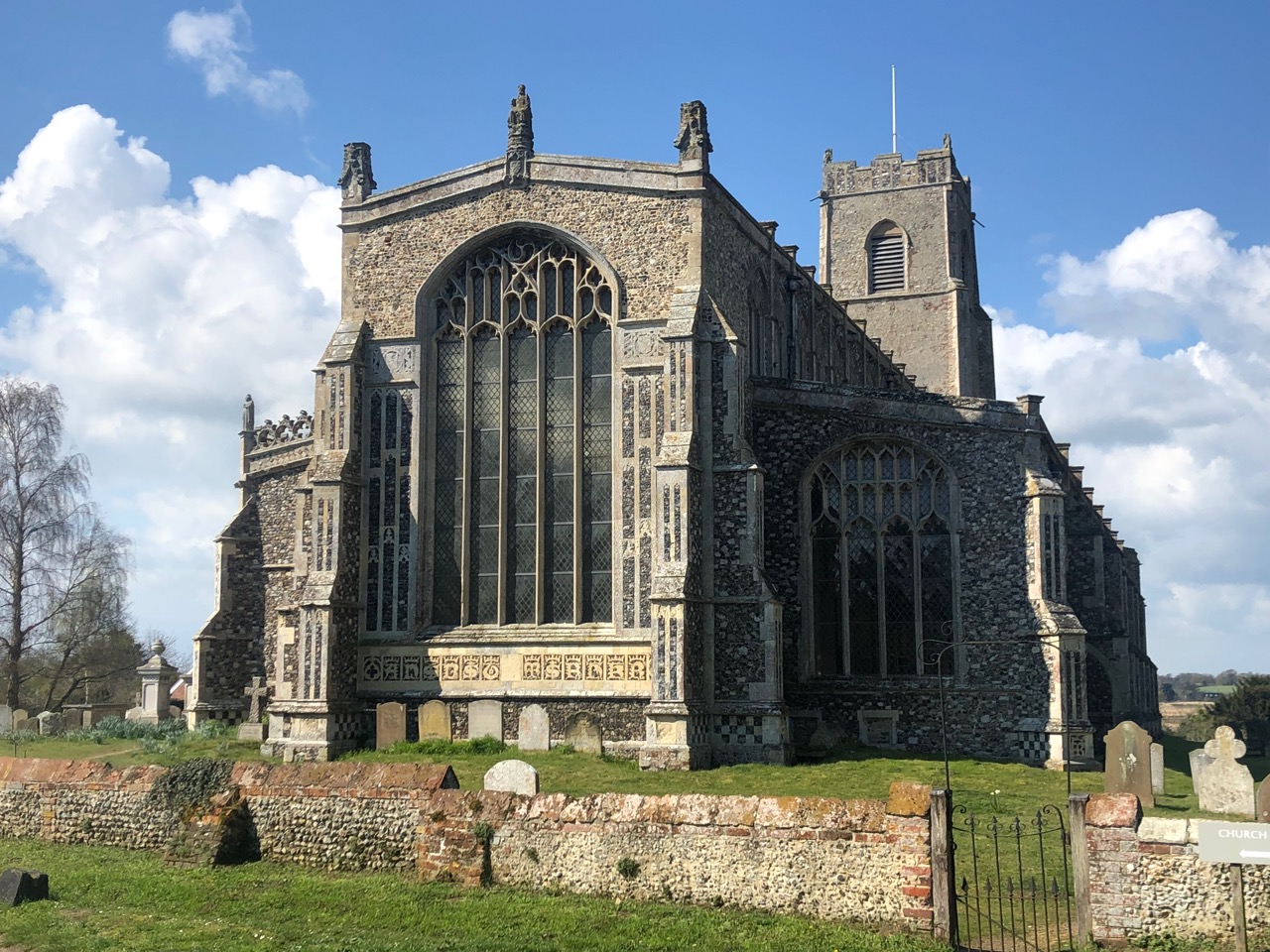 It was twenty years ago this year that I left Charles’s office – my first ever job – and moved to New York. Wow, life changed! But I have never forgotten those first years, and Charles was the entirely the person who steered me on to the path of architecture, and taught me so much of what I understand about building today.  It was an amazing office, and even more amazingly, in a sense, the little band of us who worked there have stayed in touch ever since.

A few years ago now, we were brought together in real sadness when one of our colleagues, Gavin Brown, died of cancer – far too young, leaving his wife Sam and two young children. We all went to the funeral, and at lunch afterwards, we decided to meet for an annual lunch, ‘Gavin’s Day’, in his memory. And so that’s why I was heading to the coast. We met for a lovely lunch on Saturday in Bury St. Edmunds. As always, it feels like time stands still and no-one has changed at all, but whereas their sons and daughters were 8 when we worked together, now they are 28, with kids of their own. And so the circle of life goes round. It was a happy time, reminiscing about the old days, sharing new stories, thinking back and ahead.  Lunch lingered on and it was very late afternoon as we got home.

Early evening light in the garden: 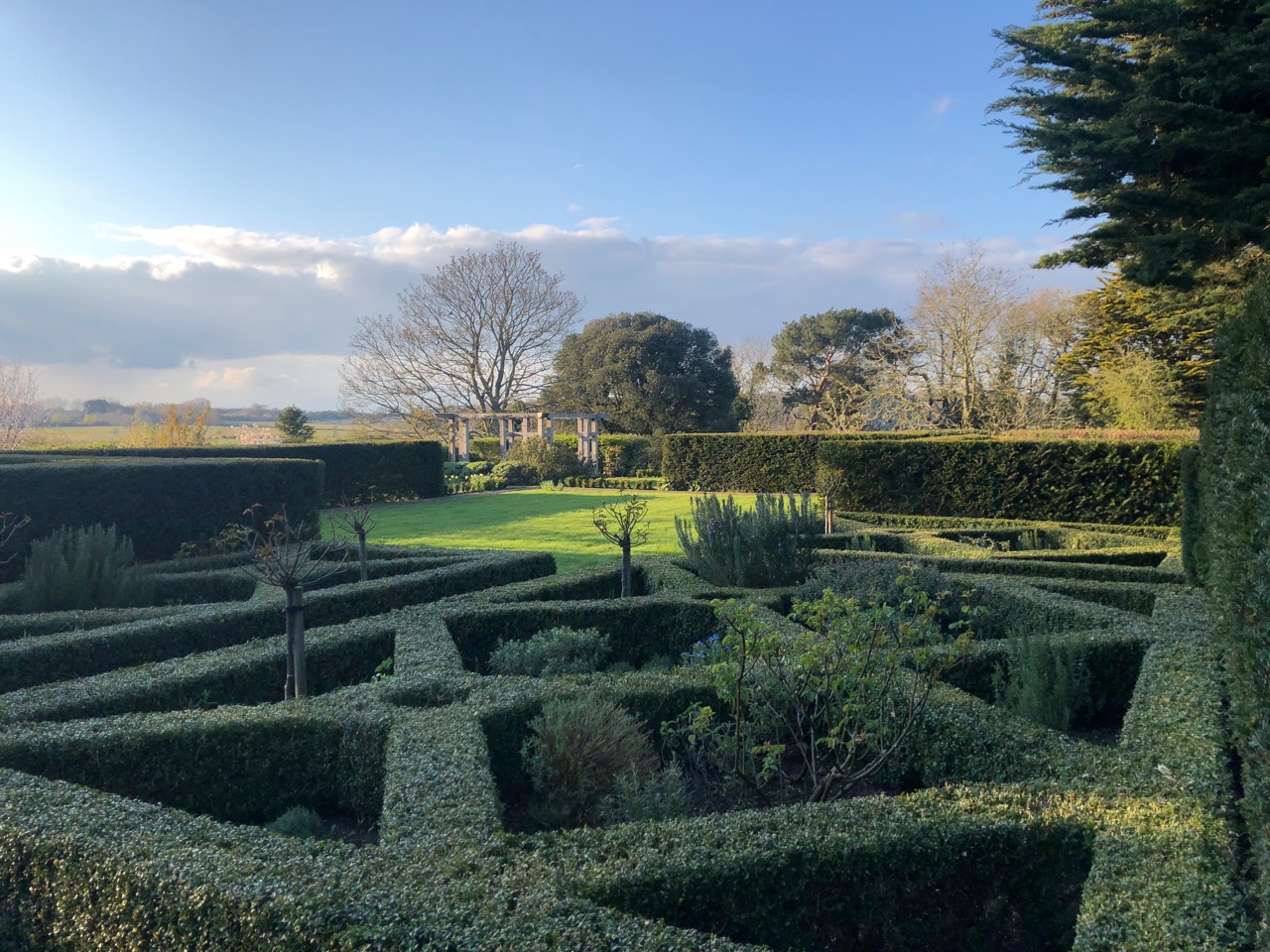 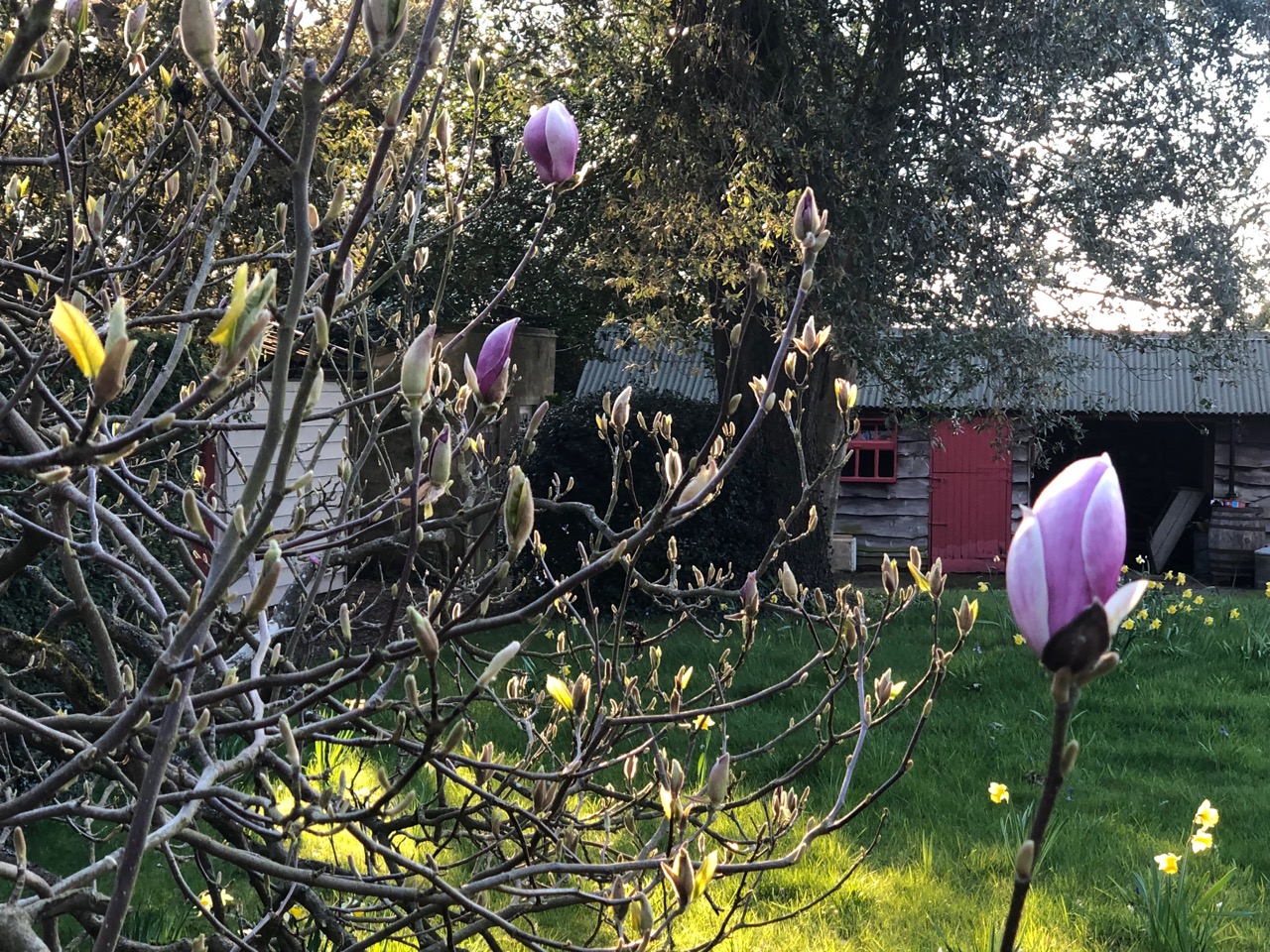 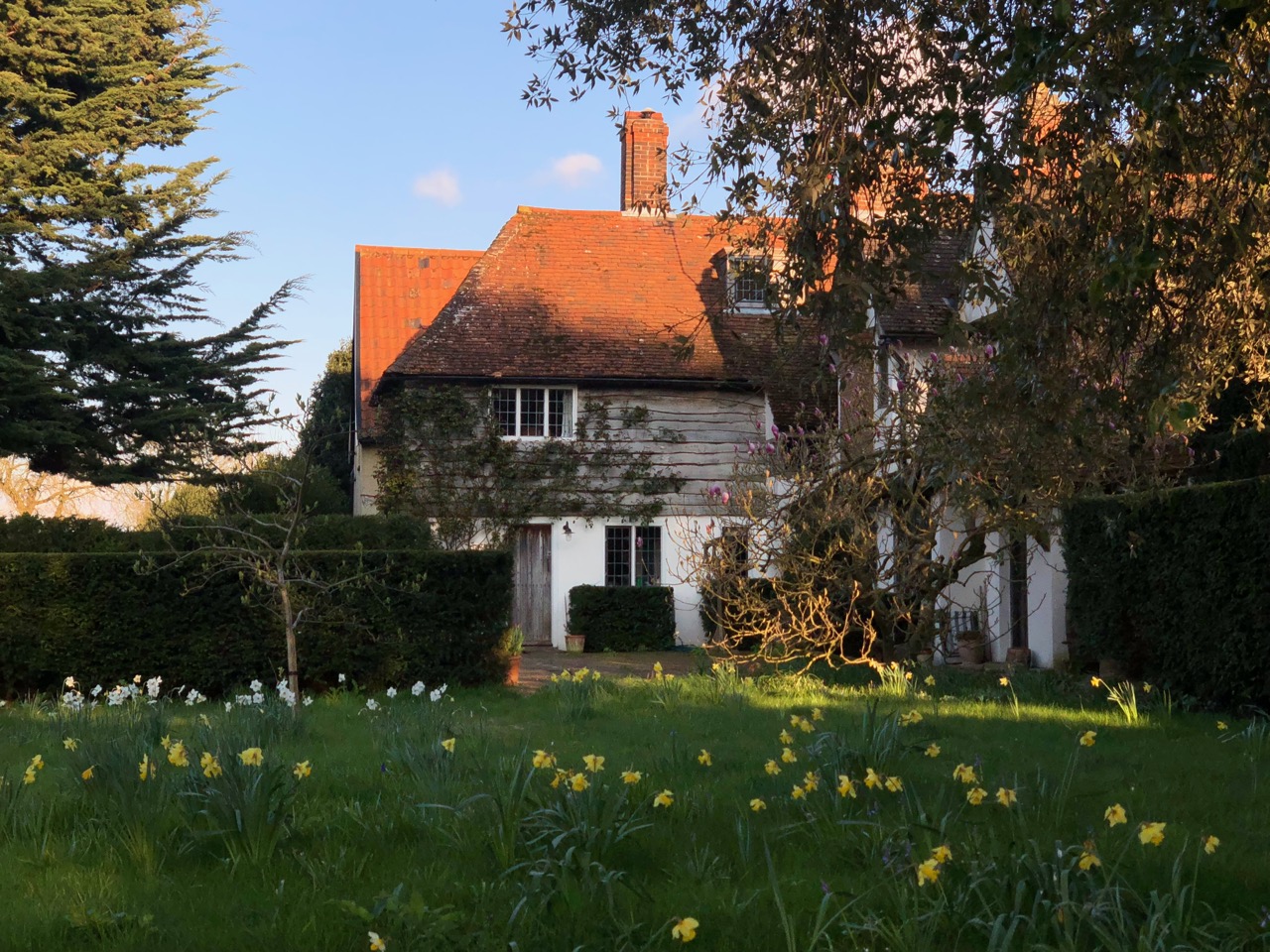 Rachel and I took the dogs for a final turn around the estuary.  The Blythburgh church tower sails above the marshes below – what an extraordinary placement of a building. 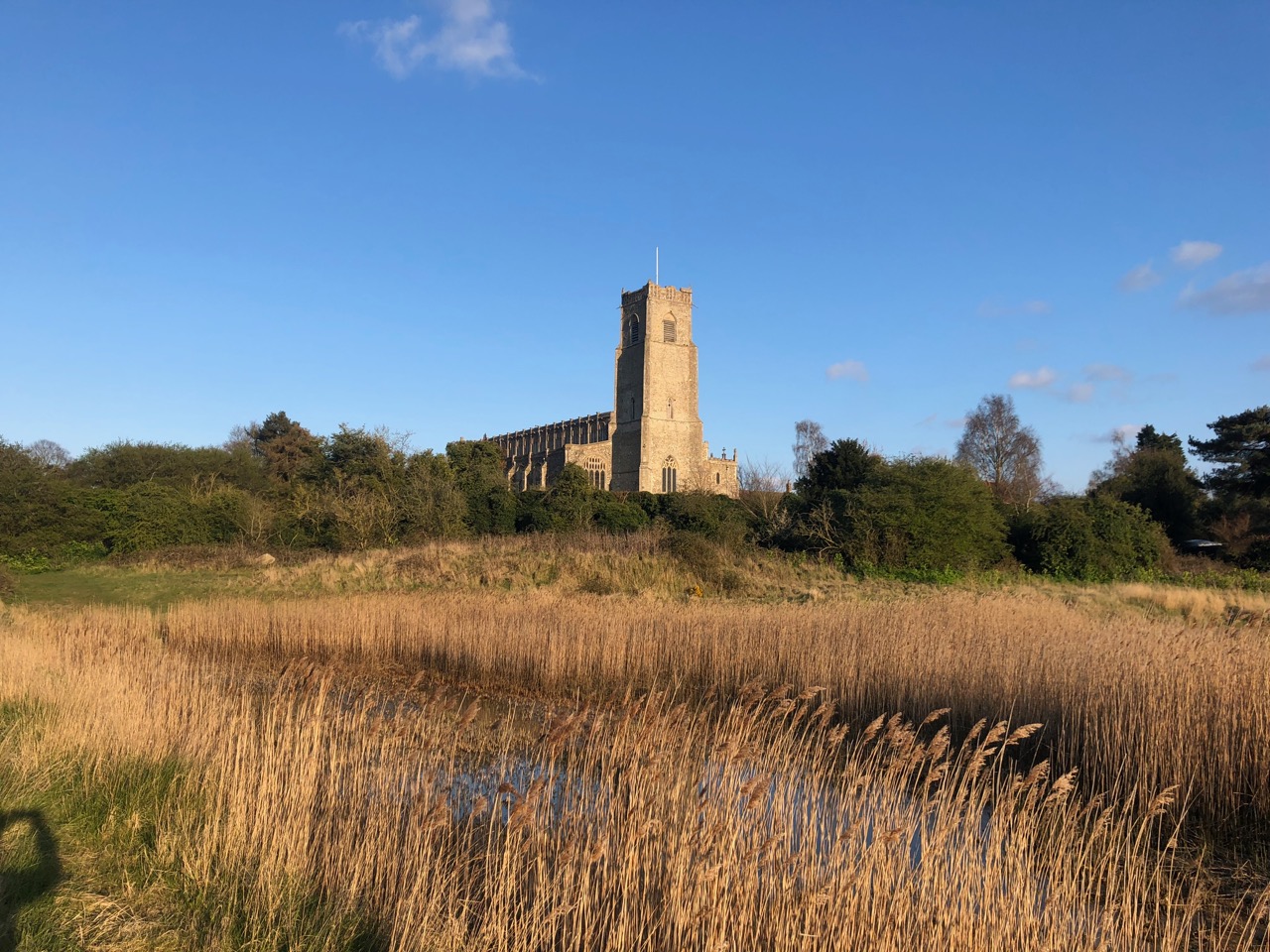 And in Suffolk, the blackthorn glowed too, in the evening light. 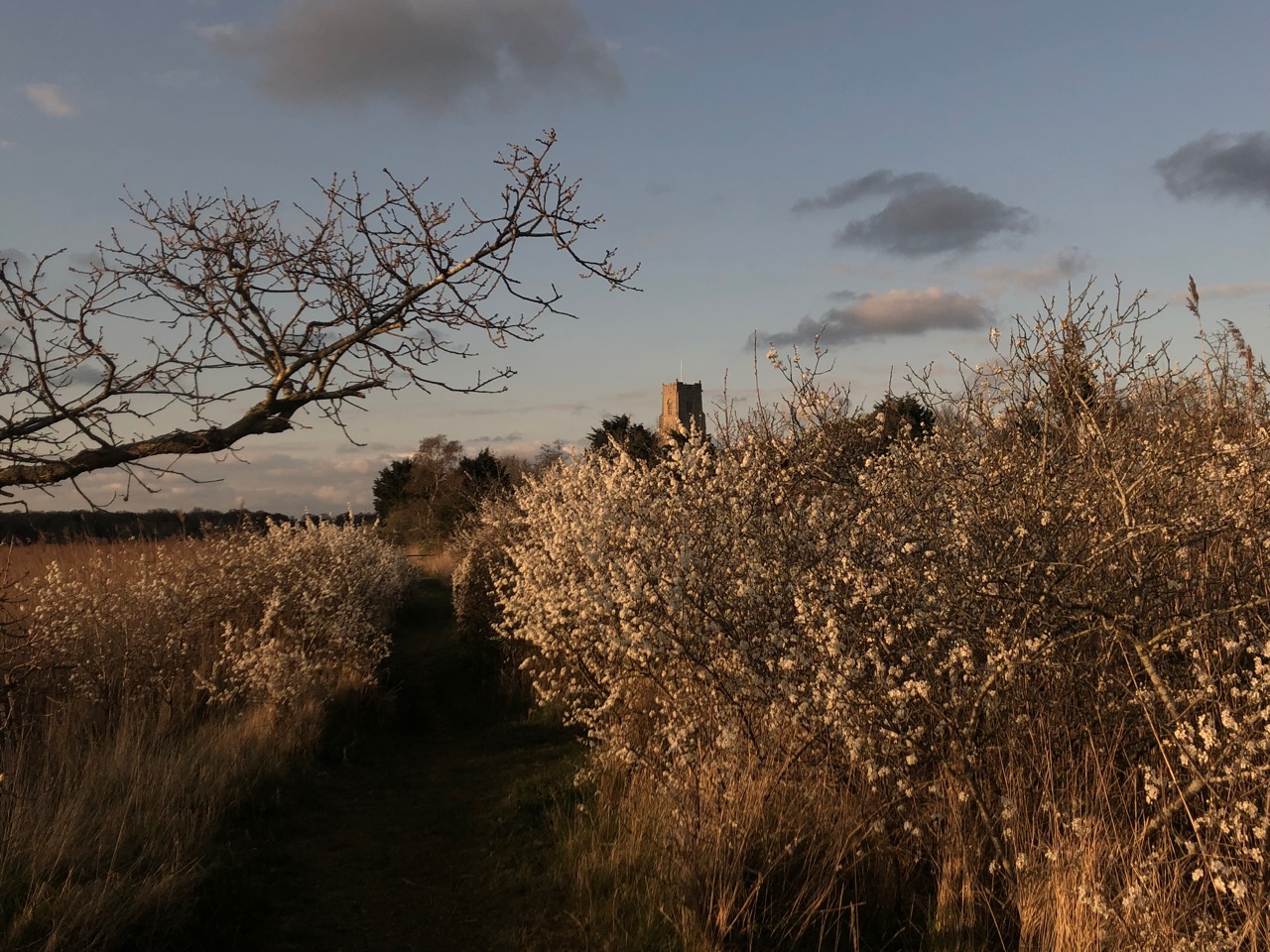 Charlie was in Dorset, having decided not to make the long trip from Dorset; he visited the West of England Auricula show, which I’ll have to go to another year, and going out to the pub with Dad, and generally being very busy in the garden, as gardeners are at this time of year.  We all missed him, but it was good as always to have that little moment of pause, Gavin’s Day, and think of times past. Twenty years travels very fast, in one sense, but as I look back, trying to remember individual days or moments, I can see an arc of time moving rather slowly, too.

Long time blog reader, first comment. Thank you so much Ben for allowing us a peephole into your beautiful corner of England. So enjoy your posts and views of life and people.

Would love to know where you had lunch in Bury – we live close by and what’s good enough for you……. Love Blythburgh church, seen from such distance from many angles.

Ben, what a terrific post (as always), and Rachel’s veg garden looks exactly right, just what I dream of having. Of course, five minutes with me in charge, and the tidiness would be a thing of the past! Happy Easter to you and yours, Deborah in Cambridge USA

Glorious pics Ben. The countryside quite lovely and Charlie’s garden inspiring. Heading off to the UK next week. I do hope the tulips are still out. Dreaming of them as I planted mine yesterday. I live in New Zealand

Hailing from the states, here. I, too, simply love all your photos and the memories you share of those long passed. Thanks for this. It is always a delight to come here.

Oh Ben, everything is so lovely and pastoral. I believe I mentioned this to you before but your pictures of Dorset so remind me of the green rolling hills of northern California before so many people chose to move here. Particularly pics number 6, 10, 11 and 12. I can remember as a child seeing these kinds of vistas on a daily basis. Regrettably, I have never been to Dorset, only London, but I just know I would love the English countryside. Your home and gardens are wonderful. Have a lovely Easter and thanks, as always, for sharing.

Thank you for knowing the difference between “lie” and “lay.” I noticed it in the sentence about the sarsens.

This was a lovely respite from Chicago’s spring snowstorm yesterday. Thankfully it is melting away in sunshine as I type. Gavin’s Day is a lovely idea to celebrate the circle of life…as does your post and commentary. People leave us, life changes, landscapes change, but as wonderful Stephen Sondheim wrote for “Into The Woods” “No one is alone…”. Have a beautiful Easter weekend.

I wanted to send greetings and thanks from Santa Monica, California, where this girl treasures your beautiful writing, pictures and stories from your enchanting Dorset and all points around the globe. You are a joy to my soul. Deepest sympathy on the loss of your darling mother. I was so deeply moved and grateful to have your narration and pictures of your experience. Sublime.

I’m definitely becoming a fan of your landscape photography, Ben. It may have something to do with walks around the farm I had with my father; there’s something about the light around dawn and dusk that gives the landscape an almost otherworldly quality.

Isn’t knapped flint a wonderful building material… the texture it gives to the surface of a building and the way light reflects off it.

I have been following you for years but never commented. Your blog post arrives to me on Monday mornings here in Connecticut. Your photographs are wonderful, and the text that accompanies the photos is sublime. I enjoy the Dorset posts very much. Thank you for your amazing blog Ben.
Susan Flynn

Dear Ben
What lovely images such a joy to look at thank you. I believe the actor Ralph Fiennes got married in Blythburgh church some years ago.Hope you and Charlie have a happy easter and of course your dear dad.

Your photographs are always amazing Ben – what camera do you use? Your blog made me cry. We have a group – the TinTin Club – who have been meeting for 40 years now – commiserating and celebrating the ups and downs of Life.

Dear Ben,
thank you for your wonderful photos of spring in Dorset with your amazing garden and the photos of Suffolk. Lovely words to hear from you, love this tradition in Suffolk with remembering your colleague ! Yes, twenty years are going so fast …… !!! Love this beautiful arts & crafts house and garden …… We visited Suffolk and Blythburgh church too in 2013 and I enjoyed it so much, such a beautiful landscape 🙂
Wish you now a wonderful week and a Happy Easter weekend !
All the best,
yours Birgit from Germany 🙂

You can’t imagine what your blog means to me, here in cold Montreal! Thank you for doing tis so regularly.